We’re on a mission of gender equality. The women’s team at ASD Torres have won seven Italian championships, eight Coppa Italia titles and seven Supercoppa Italiana wins. The men have achieved nothing. That needs to change. Stay tuned for history in the making. Click here for the prologue and index of chapters.

Felice anno nuovo! It’s been six months since I took over Torres and so far we’ve been tearing up the opposition. It’s January now and we are comfortably leading the Eccellenza Sardegna. We’re on a 13 game unbeaten streak with 23 goals scored and only 4 conceded. 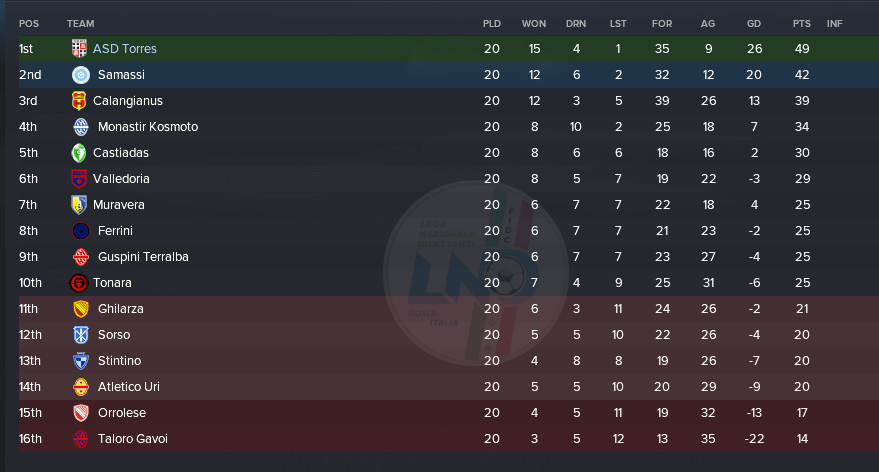 The success is a double-edged sword, however. Obviously, everyone at the club – hell, everyone in Sassari – is thrilled that we’re doing so well. We’ll need to, of course, if we are to claim the Eccellenza trophy that the media and our board have been demanding from the get-go.

However, the fans at the Curva Nord aren’t the only ones noticing our performances. Half our first team have other clubs swarming for their signatures. Our Argentinian right winger, Maximilliano San Millan, is even being scouted by Vicenza. Vicenza! They’re two tiers above us, their home attendance is six times ours and their training facilities are listed as “great”. I mean, come on, they even pay their players.

Being an amateur club I can offer him nothing but the promise that we will achieve great things at this club. He can either be a part of it or get off at the next station. But this train is stopping for no one.

Nobody really cares about this competition. But the way I see it, this will be the first step toward matching the ladies at the club. Remember, this is what we set out to do: We have to catch up with the incredible women’s team at Torres and win 7 scudetti, 8 Coppa Italia titles (the real one) and 7 supercup wins.

We need that winner mentality in the men’s changing room as well. It doesn’t come by itself, but brick by brick we’ll build it. The first stone is laid today as tonight we’re hopefully going to bring home the first silverware. Or tin foil or plastic or whatever the Coppa Sardegna Eccelenza trophy is made of.

We’re playing Guspini Terralba at the Nino Manconi stadium in the village of Tempio Pausania. It’s neutral grounds, but it’s much closer to Sassari than Terralba, so I’m expecting the rossoblu faithful to show up in good numbers.

I sent the team out in our usual 4-4-2 formation. We’re sitting deep and relying mostly on our wingers to bring the ball to the two powerful forwards, Botrini and Grimaldi. Grimaldi is a new signing, that joined us in late November. He has the acceleration of an old tortoise but other than that, he’s brilliant.

I’m playing him as a target man with Botrini as the advanced forward. It probably due to lack of chemistry, but so far their link-up have not lived up to expectation.

And then in the 43rd minute this happened:

The rest of the match flew by in a flurry of headers and shots from our forwards. Guspini Terralba fought bravely and in the end, the 1-0 results was probably a fair reflection of the efforts. 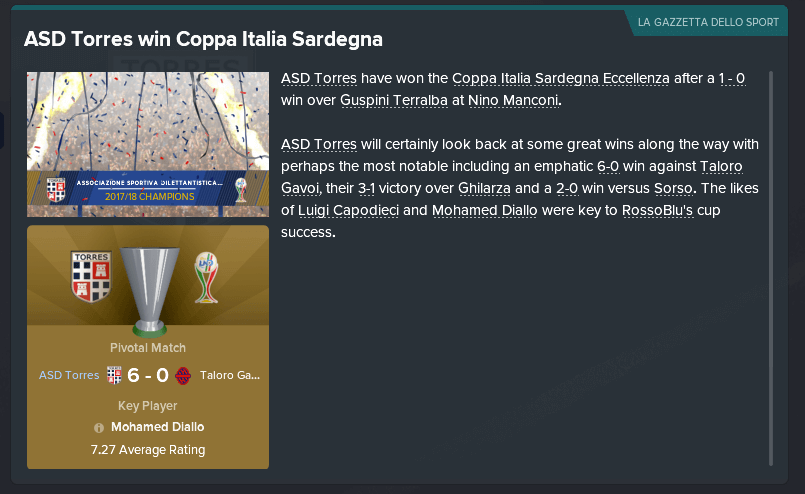 So there it is. A tin foil trophy and 10K of price money in the bag. Not bad at all. Now all I need to do is call the local bus company about renting an open double-decker.

We’re on an 18 game unbeaten streak. What happened next will blow your mind

Fast forward a couple of months and it’s now late March. The morale in the men’s locker room at ASD Torres is about as high as the peak of Monte Santu. No-one has managed to keep us from scoring since that fatal game against Tonara in October (read here about how our best player broke his ankle). We’re currently on an 18 game unbeaten run with 17 wins and a draw in five months. 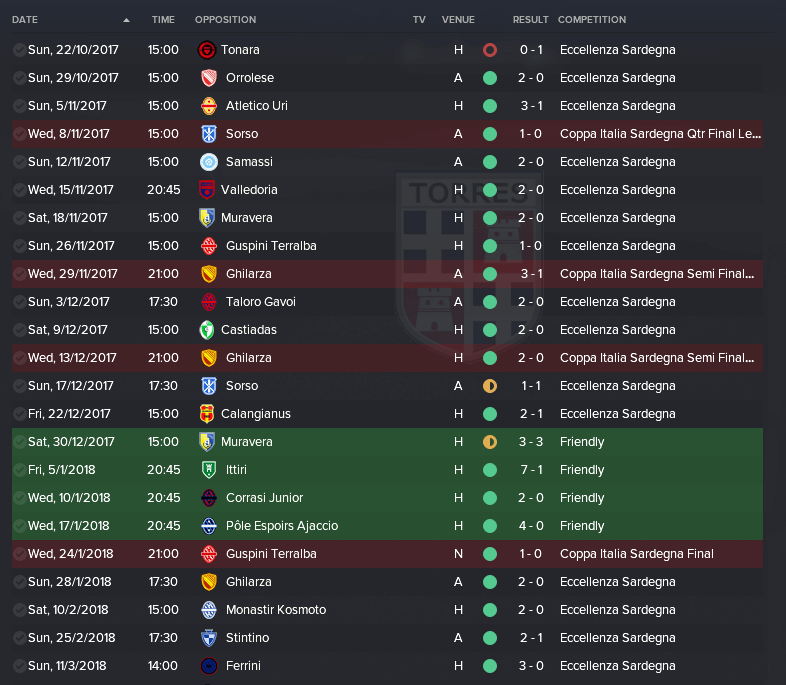 With six games left in the season, we’re just one win away from lifting the Eccelenza Sardegna trophy.

Good news also, that Javier Martinez is finally back after braking his ankle in the match against Tonara. Though it turned out we needed him less than I thought at the beginning of the season. He might have been in a foul mood, but he has healed a lot faster than expected. He’s still not ready for his first start yet, but I’ll play him as much as I can in the remaining matches. He might be an ill-tempered liability in the changing room dynamic, but his sheer technical ability makes me want to take that risk going into next season.

So 18 games unbeaten since the Tonara defeat. Javier Martinez just returning. The possibility of securing the double in the next game. I’m not one for reading too much into signs, but then… our next fixture is Tonara away.

We came out strong in the first couple of minutes getting a few shot on goal. Then in the 7th minute, our defensive midfielder Zanini came in a bit too hard on Canale. Free kick, just outside the penalty area.

Tonara striker Francesco Milan (freekick: 16) positions himself. Runs up and places the ball in the top right corner. 1-0 Tonara.

I told them to push forward and press for an equaliser. “Get stuck in, remember what they did to Javier Martinez last time!”

At half time the score was still 1-0. I asked them if they even wanted to win this and told them to get more balls in the box for Botrini and Grimaldi.

Finally at the 75th minute, we were awarded a freekick on the left side. Ravesi floated in the ball. Mohammed Diallo rose above the Tonara defenders. GOAL: 1-1.

After that, we were in control as Tonara clearly started playing for the draw. We had them under pressure and I felt there was a good chance we’d get another goal.

And then in the 86th minute, in what was to be the final highlight of the game, well, you probably need to see this to believe it. We’re the ones in the white kits attacking from left to right, mind you.

It was a long, awkward trip back to Sassari. Nobody said anything on the bus. Our goalkeeper Matteo Amato (concentration: 6, by the way) just sat there with his headphones on, staring into the night trying not to look anyone in the eyes.

The following day the mood was so poor, Javier Martinez pulled his thigh in training. I’m not sure he didn’t do it on purpose somehow. So he’s out again. This time for nine more days.

The only good news is that we now have the chance to claim the double when we play Orrolese at the Vanni Sanna next week. It’s a poor consolation, but then again there is something special in winning the league at your own stadium.

At least the board knows a business opportunity when they see one. They’ve announced the game will be a fan-day to boost the home crowd.

READ THE NEXT CHAPTER HERE:

Parità dei sessi 4: Stupid is as stupid does