A draw was probably the fairest result with both teams likely to be happy with a point. Both teams struggled to take control of the game early on, but Swansea had a lions share of the possession in the first half, but failed to turn the possession into meaningful chances – meaning the teams went into the break goal-less. 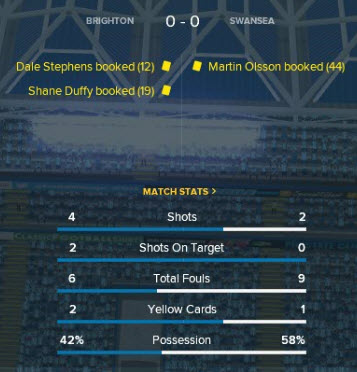 Swansea made a change at half-time, replacing Sam Clucas with Wilfriend Bony. Bony moved up front by himself, with Tammy Abraham playing as Second Striker just behind. This opened up the game massively and Swansea were rewarded in the 66th minute as Fulton fed through Abraham who did well with the finish, putting Swansea ahead.

Sadly for Swansea and Reid the lead was short-lived as Knockaert beat Fabianski at his near post just 12 minutes later in a well worked move.

Both teams had chances to steal the 3 points, but neither could find the net, so a point seems a fair result!

Vote for your Swansea man of the match based on the stats below:

VOTE FOR YOUR MOM and then enter the prize draw here: https://t.co/mkwVl6Fvjl