Josh has started to find his rhythm at Arsenal and the big summer loses seem negligible. Can he continue? Catch up with the journey so far: Episode 1, Episode 2, Episode 3, Episode 4.

It’s all going well so far and I can’t have too many complaints, although Aaron Ramsey has picked up a knock on international duty. Fourth in the table, three points off the top, and top of our group in the Europa League, I’m very pleased with my side.

A struggling Newcastle United side are up next and my team is mostly unchanged, with Coquelin slotting in for the injured Ramsey. At half-time, however, it’s goalless so I introduce Fekir in place of Giroud. Despite our attacking intent, it disappointedly finishes goalless.

There’s no time to feel sorry for ourselves though as Zlin await in the Europa League. Squad rotation occurs again with Kolasinac, Petagna, Nelson and DaSilva given another chance to shine and perhaps earn more regular league appearances.

Zivkovic, Petagna and Nelson score to give us a comfortable cushion at the break and Yassin Fortune adds in the second-half. Three games into our European campaign it couldn’t be better; three games, three wins, eleven goals, none conceded.

Crystal Palace, rooted to the bottom of the Premier League and without a win this season, are up next. Coquelin remains in midfield, with Giroud in attack. Fekir, in poor form, doesn’t make the squad but I intend to play him in midweek.

For the second league match in a row though, it’s goalless at the break. In the second-half, Zivkovic gets injured and Welbeck, on as his replacement, misses a sitter. Giroud then sees an offside chalked off for offside but Koscielny tucks home following a corner. Unfortunately, Zaha equalises almost immediately.

A 1-1 draw is another disappointment and we’re now seven points off the top. Stoke are next in the Carabao Cup and it’s certainly an opportunity for players to get a chance. Fekir, Mustafi and Kolasinac are amongst those potentially able to push back into a starting spot.

Clear improvements are shown as Elneny smashes home after ten minutes and Willock, with his first Arsenal goal, doubles our advantage after half hour, then adding a third moments later. Coquelin adds salt to the wounds and it’s 4-0 at the break. Koscielny and Giroud wrap it up in the second period, handing us a perfect win ahead of a huge match. 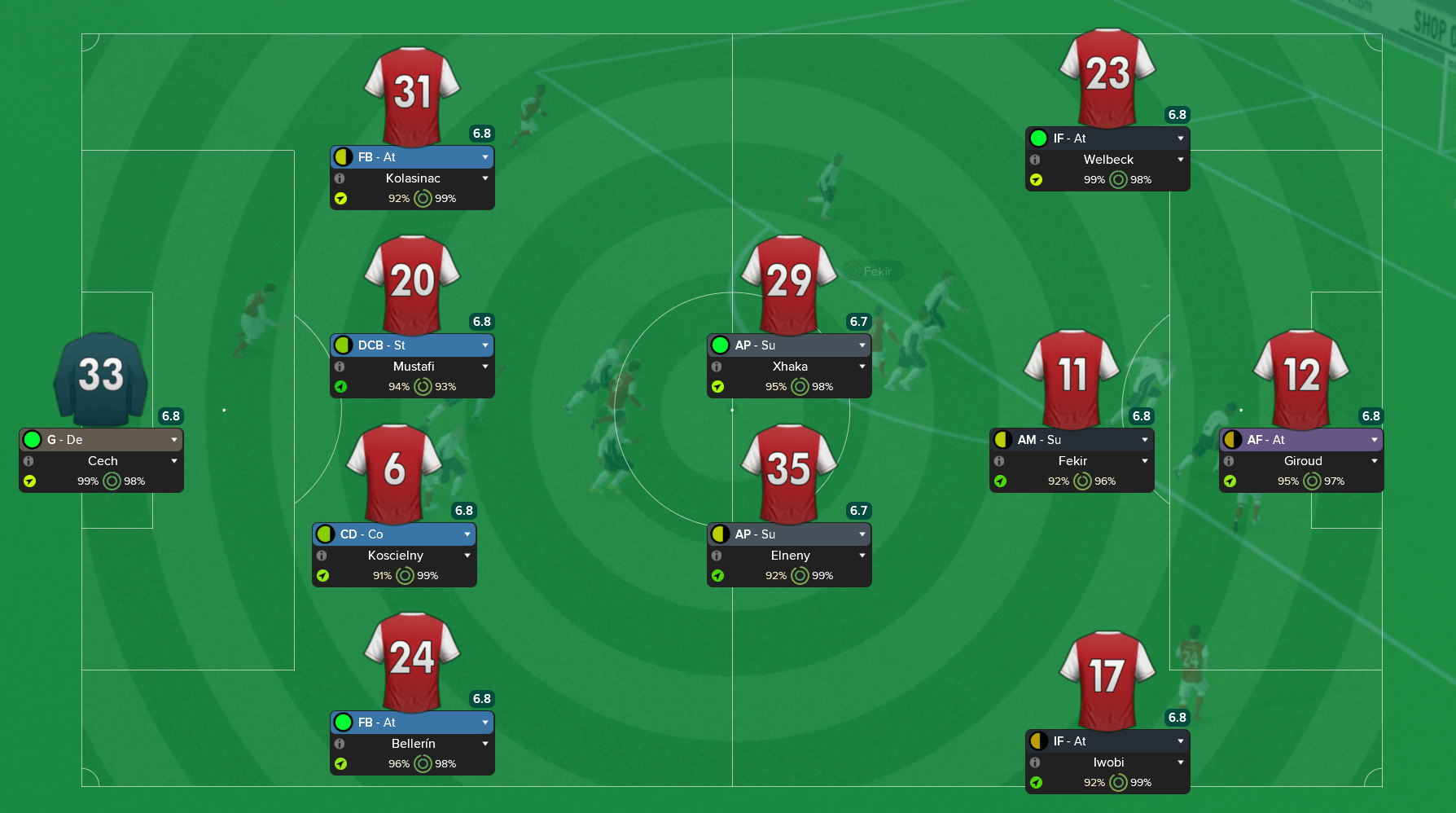 Form is my guide for selection ahead of my first North London derby and the above team is what I go with. It’s pretty much as you’d expect, though Ramsey, Gaya and Mertesacker certainly have a case to have been included.

Welbeck has certainly started to become a crucial asset and he opens the scoring after 38 minutes, giving us a narrow advantage at the break. In the second-half Wilshere, just minutes after his introduction, fires into the far corner from range to double our advantage.

The game certainly isn’t over and Eriksen pulls one back with twenty minutes to go. Minutes later, Dele Alli equalises as my side starts to crumble. It’s incredible frustrating and they look most likely to score again. Wilshere does score for us but it’s offside, though he fortunately surfaces again in the dying moments.

A dramatic 3-2 win sends us third, three clear of Manchester City in fifth. Zlin are next in the Europa League and I’ll start Walcott, Monreal and Coquelin, who have asked for more opportunities. We win 3-0, sealing our spot in the next round, but Monreal is sent off- clearly not the impression he wanted to make. 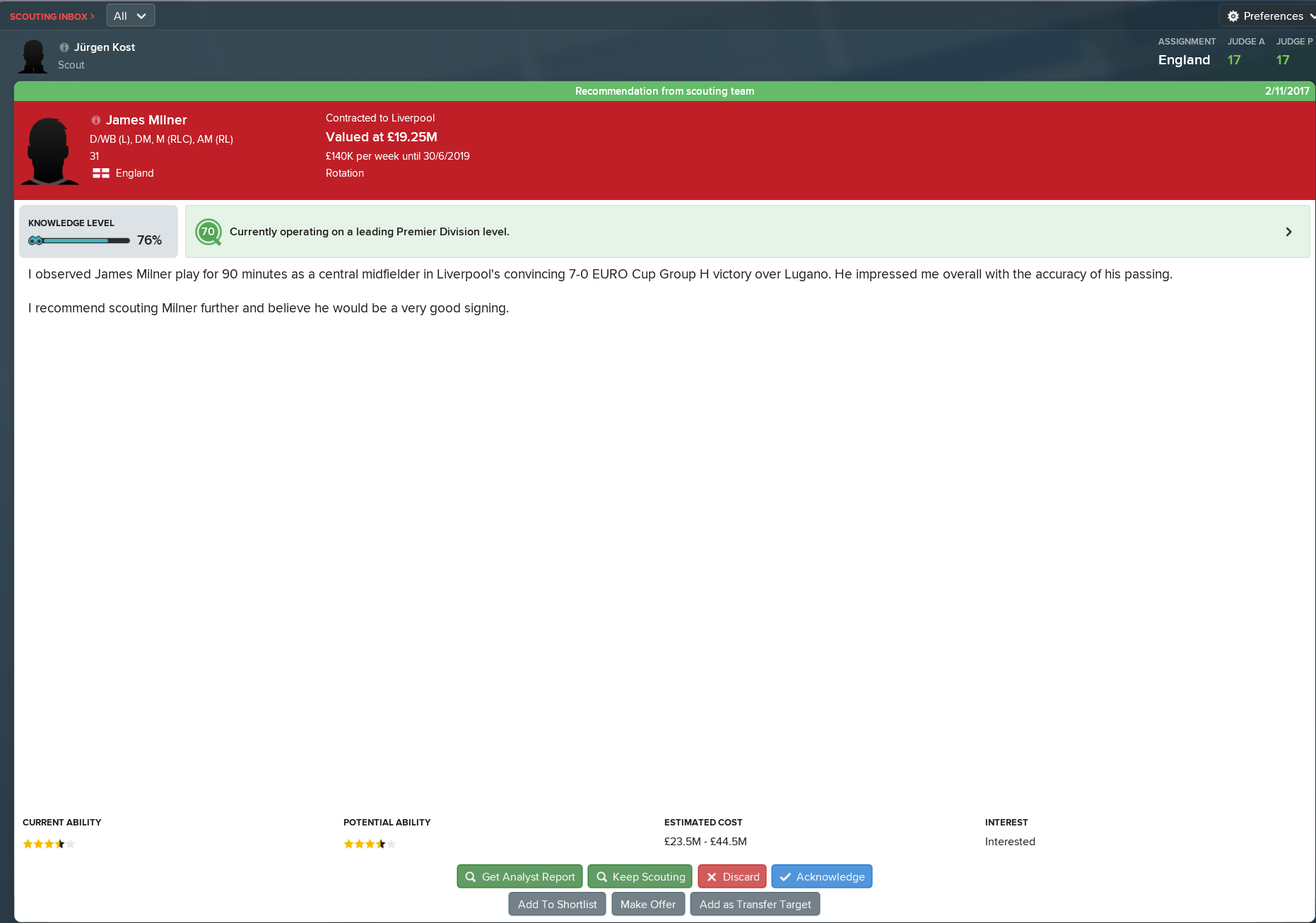 A lot of time is going into scouting currently but some suggestions are baffling. Firstly, why would I want James Milner and secondly, who on earth would spend such an audacious amount on him?

Anyway, our next challenge comes against a Bournemouth side remarkably sat sixth and just four points behind us. I hand Fekir the chance to led the line and Bellerin plays his 100th Arsenal match. Nothing helps though, as we fall behind to a Marc Hugh goal early on.

Iwobi equalises minutes from the break after I switch to a more attacking style but Surman, right on the brink of half-time, fires into the bottom corner. After an hour, Kolasinac is sent off and we’re down to ten. File this under one of ‘them’ games. Somehow, Giroud nets with ten to go and Xhaka then sees an effort disallowed, so it looks like we’ll salvage a point- until Cech is beaten far too easily at his near post by King.

We miss the chance to pull four points behind league leaders Chelsea and there’s clearly a lot of work to be done over the course of the international break. Fortunately, both Lacazette and Zivkovic are edging closer to their return from injury.