If your FM team was playing like Liverpool are this season, you would be infuriated. They have undoubtedly got the second best attacking output in the league behind the superlative Man City, they have shored up the defence exceptionally and even the goalkeepers are in form.

This is the best Liverpool side since 2013/14, and one of the best since they won the Champions League. Yet they still lose games like the Swansea defeat, they are behind Man United in the table and are unlikely to win a trophy this season.

Regardless of the success of their season, however, this is certainly Klopp’s best year at the helm so far, and he will be encouraged by the entertaining football his side produces each week. But how does he set up his side to ensure he can go hell for leather up top, and keeping things tight at the back? 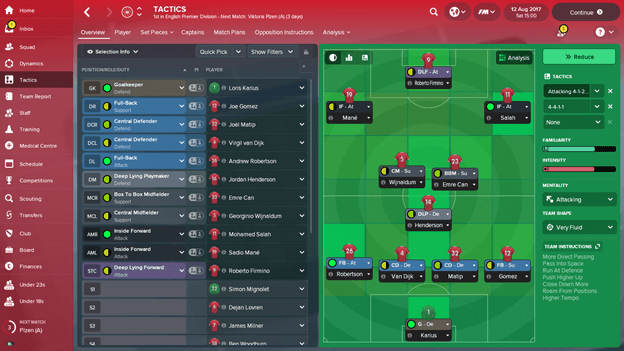 Here is the basic Liverpool formation. The majority of the play is through the middle of the pitch, with the full-backs available to provide width. The overloaded midfield marshals the centre of the park, trying to extinguish opposition attacks before they reach the defence.

This clip gives some indication of how Liverpool like to set themselves up. Ignoring the defensive line, naturally sitting deeper due to the scoreline, focus on Milner. As the ball is pushed inside, Milner’s first move is to move inside the attacker, preventing him from progressing in-field. Rather than pressing the ball, he prioritises keeping the opposition wide.

Liverpool rely on keeping the opposition in the flanks, and that has an awful lot to do with the two humongous centre-backs that Liverpool employ. As Van Dijk and Matip are both well over 6ft tall, any cross into the box can be dealt with relatively easily by the defenders. For an archetypal example of this, see the highlights from Man City against Liverpool in the first leg of the Champions League. The ball went to Sane time and time again, but the left-footed winger could not create a chance against the humungous centre-backs.

Consider the majority of Liverpool’s losses this season, and the goals conceded in them. Very rarely do they concede from a ball whipped into the box from the wing. Against Man Utd, Tottenham and Man City, many of their goals conceded arise from defensive errors from a ball over the top, or a lack of concentration from Dejan Lovren.

That’s why Klopp utilises the reverse triangle in the centre, to shepherd the opposition out wide, where they are more capable of dealing with attacking threats. 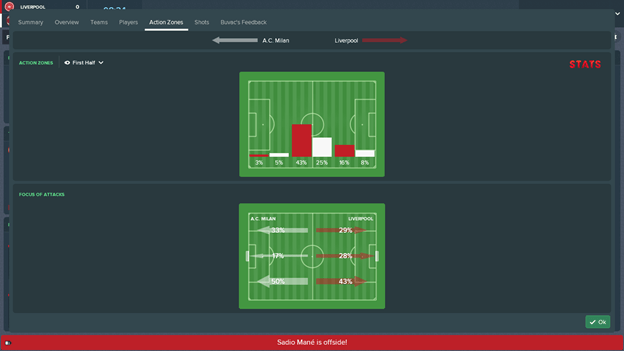 This image demonstrates the focus off the attacking output by the opposition in the first half during a match. The first half shows the significant majority of opposition attacks moving down the wings, with only 17% of attacks aimed through the centre. Interestingly, in the second half, the number of AC Milan attacks that focused on the centre increased to over 50%.

This shows how the Liverpool set up is so efficient defensively. In the first half, the opposition chose the path of least resistance, down the Liverpool flanks. However, as they discovered that they were gaining nothing, they began to aim attacks through the middle. The game finished as a 2-0 win, because despite the shift in attacking focus, Milan were unable to break down the midfield, or challenge effectively in the air.

Heavy Metal football is what Klopp likes to implement, and his attacks certainly suggest as much. Letting the three forwards roam, interlink and swap positions means that the opposition attack cannot track the Liverpool speedsters. 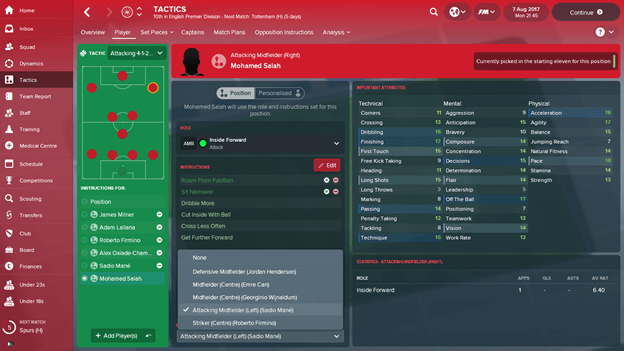 The image above describes the fundamental player instructions given to the current Scouser superstar, Mo Salah. Roaming from position, sitting narrower and swapping positions with Sadio Mane on the left wing. Both positions have the exact same player instructions, to ensure that both players play with the same level of chaotic dynamism, regardless of whether they begin the attack on the right or left.

It is this, in conjunction with a roaming Roberto Firmino that has led to one of the most potent Liverpool attacks in years. Certainly the strongest since the departure of Luis Suarez, but perhaps even more lethal than that. The deep-lying Firmino facilitates pincer-like attacks from the inside forwards, as shown by this magical counter attack. 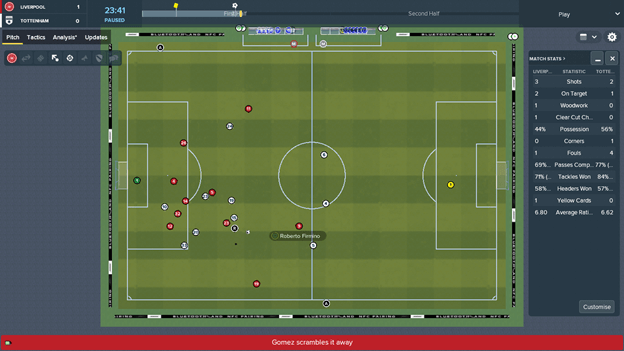 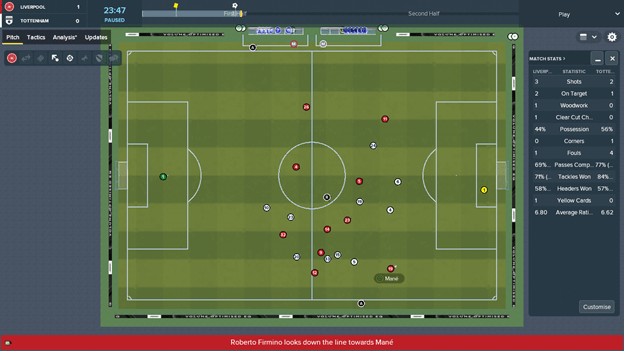 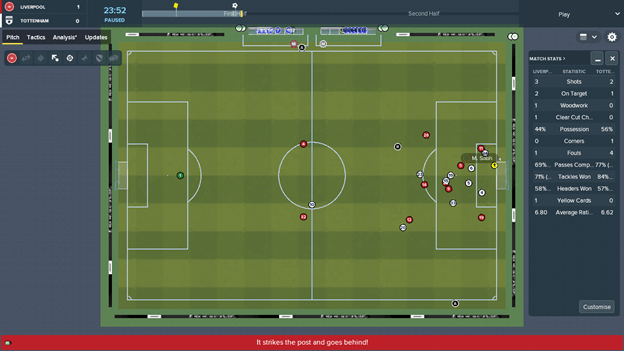 The attack doesn’t result in a goal, but demonstrates how the Liverpool attack works. Even against three centre-backs, as soon as Firmino pulls Vertonghen out of position, it’s a straight 2 vs 2, and generally, Liverpool’s two will win.

This FM attack almost perfectly replicated the goal scored by Salah in the Champions League. Take a look at the clip below, see how Firmino comes deep and moves wide, opening up the opposition defence. Salah attacks the space, and Firmino sets up the Egyptian for an easy finish. The way the front three dominate opposition defences explains why they are flying in the league.

The next shots show Mane on the left, against the same back three. These show the importance of playing the Salah and Mane as wingers who cut in, rather than as attacking midfielders. 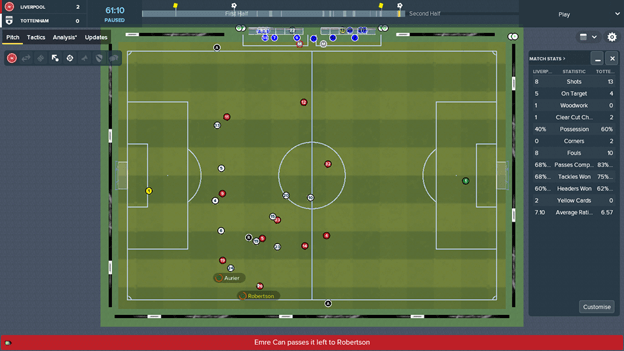 As Aurier moves to Robertson, Mane is freed up to receive the ball and fire in a cross. The back three are more than capable of defending against Firmino, but the ball goes nowhere near him. Instead Salah, sitting wide then jumping in front of the left wing-back at the last second, is the target, to score another well worked goal. 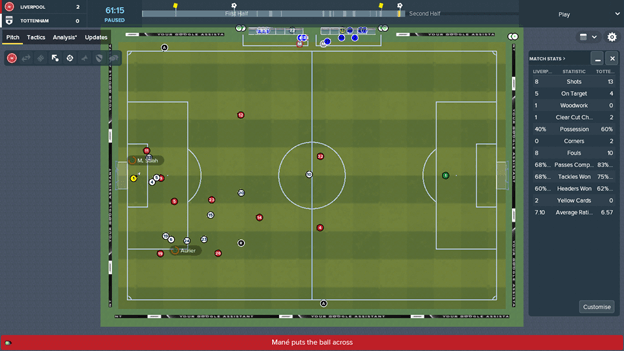 This is what Liverpool do. The beauty, however, of this tactic, is that is works whether you’re using Brazil or Bristol. The three main elements are simple. You need a striker with relatively high “passing”, “off the ball” and “work rate” attributes. You need wingers that are fast and can finish at least a little bit, again with high work rate.

These sorts of players aren’t unicorns, and applied correctly and all together, you can create attacks like Liverpool’s. What is important, however, is that the wingers are comfortable on either side of the pitch. They don’t necessarily need to be two-footed, but so long as they can function as inside forwards on both sides, they will be perfect for this system.

The current Liverpool midfield won’t go down as legendary, missing players like Gerrard and Alonso, but it is practical, and carries out the job it needs to do. Henderson is the deepest of the inverted triangle, with Can and Wijnaldum ahead of him.

Henderson plays a Carrick-style role, recycling possession and keeping the Liverpool attack moving, rather than the Gerrard-style quarterback role, which started attacks from scratch with Hollywood passes.

Neither Can or Wijnaldum would be out of place in the opposition box this season, particularly the Dutchman, given more freedom to join the attacking three, as seen by this goal. To achieve this on Football Manager, simple player roles need to be assigned.

In FM, Henderson needs to be a deep-lying playmaker. He needs to hold his position and avoid risky passes, to begin counter-attacks by moving the ball quickly, rather than over a long distance. Can can be used as a box to box, with the attributes required to be important at both ends of the pitch. Wijnaldum should be a simple CM with a support duty. Allow him to roam and move into channels, but don’t explicitly tell him to attack at all times. Remember, you have the best front three in the league (arguably).

Strictly speaking, Liverpool actually play a very simple style. Unlike the likes of Man City, who use very particular player roles which would be difficult to repeat with another side, Liverpool use quick wingers, big centre-backs, and busy midfielders. It’s a tried and tested combination, and may go some way to explaining with they have been so electric this season.