Home Football Manager 17 FM Stories Hopped it to Hamburg Part XXXII: How I set-up my training

In this bumper day of content I’ve talked you through how we got promoted at Hamburg and how I recruited the squad.

Now we are going to look at how I set-up my training.

I’ve never suffered from many injuries to players – we always finish bottom of the injury list league table (or top, depending which way to view it – either way, we have the least injuries!)

By following this simple method – I didn’t come up with it, credit has to go to whoever wrote the original post on Football Manager Central (now defunct, as is its successor FManagers). I have, over time, taken their basic advice and tweaked it to benefit me as much as possible.

Before we start, I want to make this clear – I didn’t come up with this and I am not saying it will work for everyone or it matches exactly how the game was created or any of that rubbish – it works for me every time and frankly the only save I am really interested is my own. So try it if you want, but this is not me doing a how-to guide trying to impart wisdom. I have none. Sorry.

Firstly – the coaches (this bit I do do my own way out of personal preference).

When I recruit my coaching team I am ideally looking for someone who meets the following criteria.

This is obviously easier to do when managing in a country like Germany – when I was in India it was nearly impossible to find any Indian coaches that were likely to improve my players.

If I cannot find someone good enough, I do not recruit in – I have managed sides with zero staff successfully, for example at Tonnerre KC in Cameroon on FM16 I went the first two seasons with no staff and did well.

Again, I am not saying this is right it is just the way I do it.

If I have the right coaches then providing I have the confidence in our tactical approach then I believe I can improve pretty much any player that comes to the club and turn even the most ramshackle bunch into a half decent team.

The first thing I do when I flick to the training screen is set it as follows.

Yes, even on the first day of pre-season training. Why a low intensity level? Because the individual training is going to increase their intensity.

Every single player is then on an individual programme with the sole aim of touching and improving as many attributes that are relevant to their position as possible. 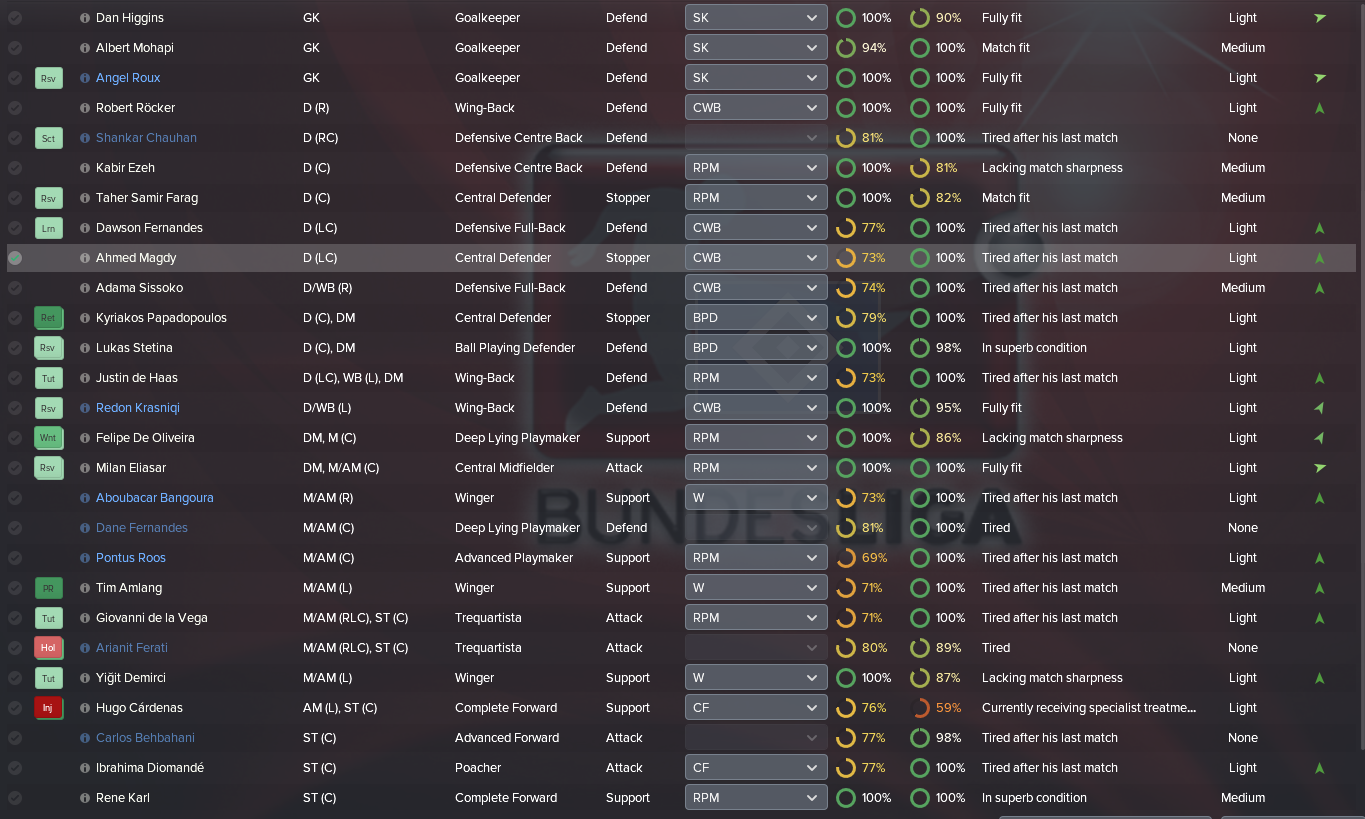 To me it does not matter what the player role within the tactic actually is – what I mean by that is that if my tactic has defensive full backs that does not mean I have to train them as defensive fullbacks. I choose the training based around the role that will touch as many attributes as possible and then choose an additional one for good measure. 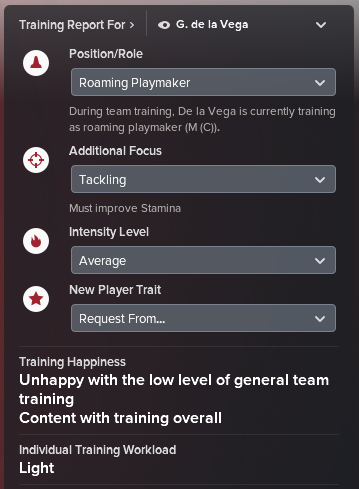 Gio plays central midfield – now whether he is playing in the CM/A role or in the RPM role he is being trained as a RPM with the additional training of tackling. This is because it covers the most attributes.

Look at how many things get covered that way – if I trained him as a CM so much of the physical side does not get touched.

It just makes sense to me that players will improve quicker if they get trained in more areas – regardless of whether that is right or not.

That’s just three examples of the monthly improvements players are making. There were more, but I don’t want to bore you.

These are my preferred training roles depending on the position in the 4141 I use.

GK = SW/K + leadership (I like my keepers to become leaders)

Another thing I do every single month is talk to my players about their training performance – first team all the way through to the U18’s.

Once I get the monthly report from my assistant I go through every player contracted to the club.

Anything less than 3 arrows equals a bollocking.

Yes, this upsets some of them sometimes but typically I see an improvement the following month.

That’s all season long – just four injuries where people were out for more than a month.

I’m quite happy with that too.

I’m sure physio’s and sports scientists play a part too – this is what I have.

It’s important to point this out though – I have run this exact same system when I have had no physios, no sports scientists, no coaches, nada and had the same results – improved players, few injuries.

For me it works.

As I said, the original framework was not my own, but that is how I have adapted it over the last couple of years.

Any questions, feel free to ask.