With the beta coming out a matter of days after Ronald Koeman was shown the door by Everton, it was an obvious choice to show him how it’s done. The Toffees spent big over the summer, but a run of tough fixtures and dire performances saw the Dutchman sacked before the clocks had changed.

It’s a similar enough task on my part. I want to take this costly Everton squad to a top half finish at the very least, and build towards becoming a part of the top six within the next couple of seasons.

In doing so, I’ll lean on the impressive youth academy, aim to spend on players before they peak, and refresh a squad that is beginning to creak.

Unfortunately, I am met with four first teamers out with long-term injuries. Ramiro Funes-Mori, Seamus Coleman, Yannick Bolasie and James McCarthy are all a long way off first team appearances, and short-term replacements for them have to be an early priority.

The diamond is my initial primary formation. It relies heavily on the full-backs, but suits my midfield-heavy squad. I am hoping to have a couple of formations I could switch between throughout the season, though the short-passing diamond is the one I intend to lean on. 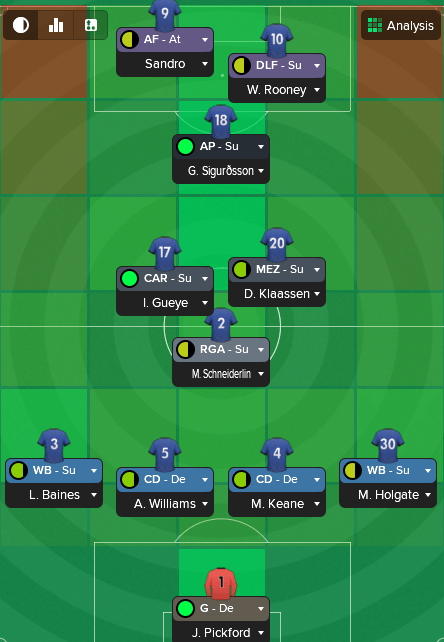 My squad is short of work-rate to begin with, however. It leaves me with my hands uncomfortably tied tactically, so I must reign in my urge to press the opposition into oblivion.

Other tactical options are on the back burner for now. A variant on a 4-3-3/4-2-3-1 is inevitable, while I pondered a back five. The final decisions are probably going to be made once the transfer window was over. My transfer business will be based around the diamond, or at least I think it will be.

It’s philosophy chatter time. Farhad Moshiri and I sat down for a quick chat, and we quickly agreed. I will – for as long as I survive in the post – be judged on using academy players, and be supported in signing youngsters for the first team.

Perfect for me, really. Tom Davies is ready to be a squad member, Mason Holgate is a depth option and there are plenty of others around the club who could be of use. I want to sign players who will improve quickly; this should help me to pick up some bargains.

The early knockings of the window bring little of note. I am getting the hang of the new scouting system, but few people are really catching my eye. Ideally, a few will leave the club before anything important actually happens, but that could be tricky. My playing staff is elderly, and frankly cluttered.

While the friendlies continue to bubble along – and Leighton Baines’ fitness becomes an issue – the Europa League qualifying draw pops up. It’s Aberdeen over two legs, and the first competitive test of my tactics.

Before we got to that, though, it was time to do something that Koeman never did: sign Ross Barkley to a new contract. His injury means I am not sure of his role in my squad, but at least this guarantees a fee for him.

Then it’s time to get to the serious business. You can see my line-up, as I reverted to my diamond system rather than the 4-3-3 that had leaked goals to Macclesfield in pre-season. Muhamed Besic, Barkley and Davy Klaassen were still not fit enough to make the squad, while Sandro had just about recovered from a twisted knee. 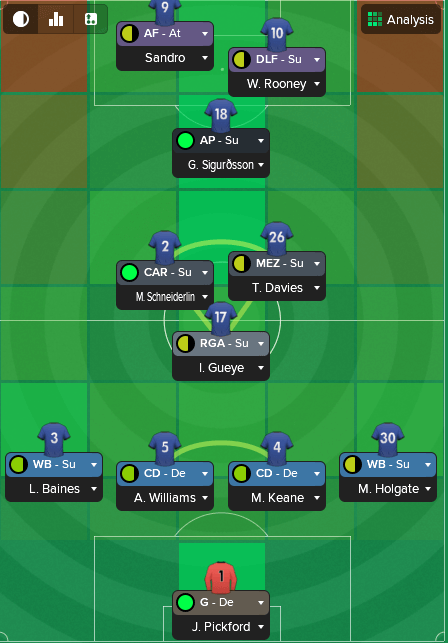 Aberdeen take an early lead, as my defence unfortunately resembles Koeman’s. The ball drops in the box after a failed clearance, and Jordan Pickford has no chance. The rest of the half was pretty much end-to-end. Then, in true Ashley Williams fashion, a penalty was given away just before half-time. We are 2-0 down at home, and our European fate is looking bleak.

Gylfi Sigurdsson had offered nothing, so I had little choice but to hook him at the break. I went for the hairdryer.

It worked! Tom Davies received the ball on the half-turn on the edge of the box, and unleashed a scorching shot into the top corner. 2-1, and we’re in the tie.

Even with a dominant performance in the second half – and a red for the visitors – an equaliser never arrived.