Home Football Manager 17 FM Stories Binned by Brescia: 5 things I have learned by being sacked 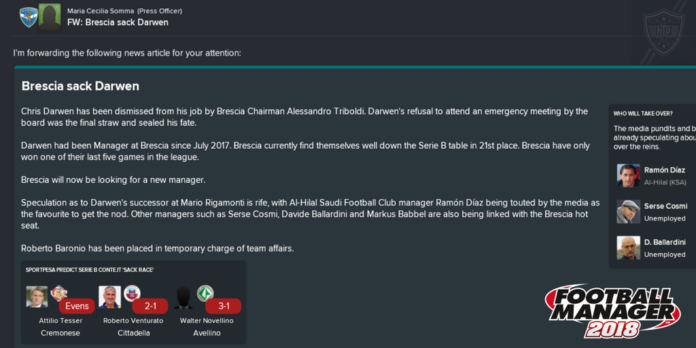 I know I am in good company.

Loads of us have been sacked in FM18 BETA, and that makes me feel better about myself.

Everyone and their gran getting sacked left right and centre! ???

That moment when you plug something on the pod and the next day? ?? https://t.co/oKRtOpLdar

I imagine I will be soon

Twice, and by the same club. Can anyone top that?

It is happening a lot, and people are actually admitting it which is cool. Is FM18 harder, or just more realistic than ever? Who knows, but there are lessons I have learned since being binned by Brescia.

In Italy, it is the first time ever that I actually felt like I’d physically “lost the dressing room”. The 5-0 defeat to Foggia was a simple case of the players downing tools and deciding they wanted me out. And it worked, I was sacked the next day. So, I need to rethink my previous approach to player management – maybe I cannot be the dictator this time round. Watch out Jose, they are coming after you as well.

#2 Players actually care about your reputation

I was up against it from the start, even at Brescia. Rocking up with my UEFA B license and a semi-professional playing career did not impress them at all. They doubted me from the start, and I could imagine them whispering “what does he know, he never even played the game” in their very best Eden Hazard accents. Spoiler alert – I do have a new job at an even lower level and they pretty much feel the same!

#3 Forget everything you already knew about tactics

OK, that might not be strictly true but do not assume that just because it worked for you in the past that it will work for you again. The ME evolves so that “game-buster” from FM17 may not work this time round. Also, remember it is BETA. Things might change again come full release.

Hey, just because it now exists in FM18 doesn’t mean you have to use it, says the sacked manager that tinkered with segundo volantes, mezallas, carilleros, inverted wingers and wide trequartistas. Those FB/S and CM/S are still in the game for a reason as well.

And that folks, that right there sums up my brief time trying to unearth the next Pirlo and Baggio. I ended up not being able to see the wood for the trees. With hindsight, I should have chosen a simple shape, with minimal TI’s and built something from there. Oh, and stuck to it rather than chopping and changing every time I didn’t like the look of something. Trust me, watching a game in full match can be as much a curse as a help. You don’t need to make a change each time something doesn’t look perfect.

And with those, I am taking my very bruised ego with me to my next destination.

Oh yes, someone was foolish enough to give me another job. No more Skiveing for me, eh?