The German side have become well known in European circles over recent years for their commitment to fast vertical attacking football whilst their opponents Manchester United still favour a style of play more rooted in the success that they enjoyed previously under legendary Scottish manager Sir Alex Ferguson.

The question going in to this game would be whether RB Leipzig would be able to translate their attacking style in to goals against a strong United defensive unit. 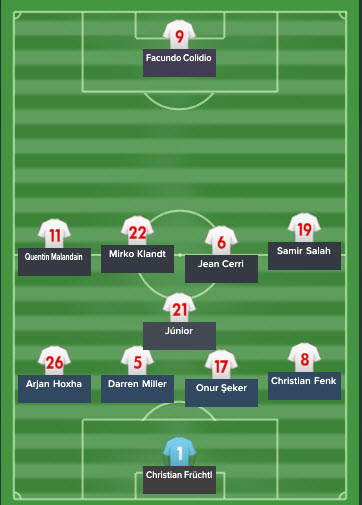 We saw RB Leipzig line up in their now standard 4-1-4-1 system with the key player Facundo Colido leading the line with little in the way of immediate support. The midfield is structured in such a way to deny the opposition spaces between the defensive and midfield lines with Junior tasked as the deepest midfielder of the three central players and Jean Cerri performing a more defensive role ahead of him.

The effect of this three man central structure limited the spaces that the United danger man Jairo Quintero would have to operate in.

The German side are known to favour a more vertical style of play using direct passes in to the channels of central area and the ability of Samir Salah on the right and Quentin Malandain on the left hand side to support Colido would prove to be key. 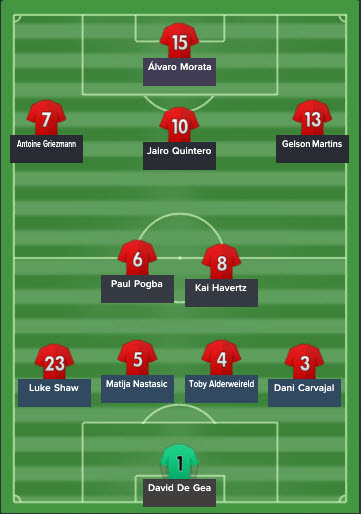 On paper Manchester United would line up in a more expansive system with the Spanish international striker Alvaro Morata effectively supported by Jairo Quintero, Gelson Martins and Antoine Griezmann.

Paul Pogba and Kai Havertz in the centre of the midfield would have to work hard to find pockets of space around the compact Leipzig system, especially with the United fullbacks Luke Shaw and Dani Carvajal given relatively defensive roles within the team structure.

As the game progressed it became clear that the German sides plan to deny United space in which to play in the final third was an effective one.

In the initial stages of the match United struggled to progress the ball in to the final third of the pitch in any meaningful way. The structure for United was effectively split between the six defensive players and four attacking players with little in the way of fluidity between the front and back. 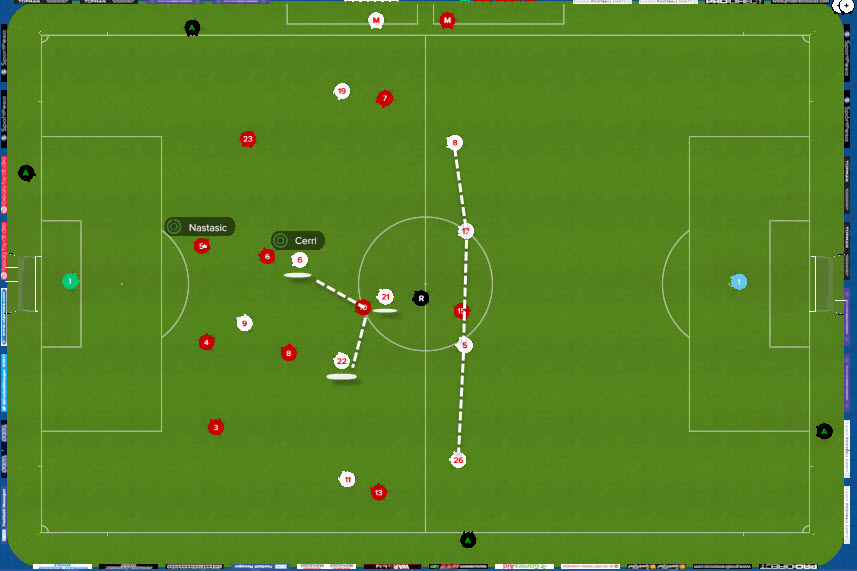 Here we see the back four for Leipzig sitting in a compact shape with little space between the central defenders and fullbacks. The midfield three are also compact in the centre with Cerri moving slightly in advance of Klandt on the left of the midfield.

The key is that the wide midfielders are also tucking back in to cover as the wingers for United try to move in to advanced positions of the field.

With Nastasic in possession of the ball in this instance the easy pass is on to Luke Shaw who is in space having moved in to a relatively narrow position. Given his defensive role though that would see both Cerri and Samir Salah well positioned to be able to close down Shaw quickly should he take possession of the ball. 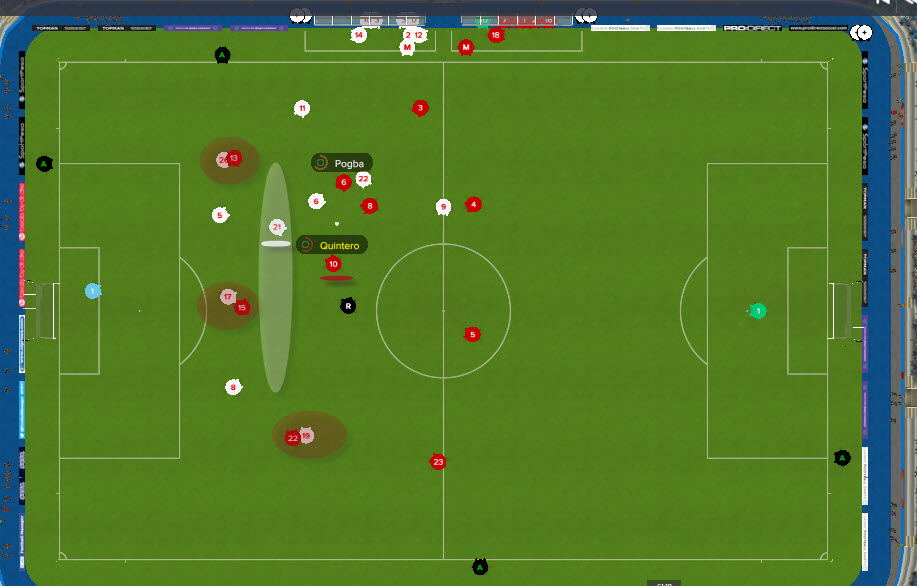 As the game progressed in to the second half of the match the story remained the same with United struggling to find a way to access the final third of the pitch in order to support Morata effectively.

In this image you can see that the key creative player for United Quintero has had to drop off to the same line as Paul Pogba in an effort to receive the pass. As he looks to take possession of the ball from a short Pogba pass we see Morata and Gelson Martins already closely covered by defensive players. On the left hand side for United Griezmann is at least goal side of his immediate opponent but Christian Fenk at right back is positioned to cover across if need be,

As Quintero takes possession and looks to advance he will be engaged by Junior who is positioned effectively to deny United space in and around the Leipzig penalty area.

The superiority enjoyed by Leipzig in their defensive phase was a constant in the match with their tactical discipline standing out in the way that they defended effectively as a solid block.

As well as being an extremely well organised and capable defensive unit Leipzig also impressed throughout the match with their flexibility when it came to applying attacking concepts.

We saw the direct passing concept as previously discussed as they looked to take advantage of the space in behind the United back line but we also saw Leipzig look to overload one side of the field before switching the ball back over to the opposite side to take advantage of numerical advantages. 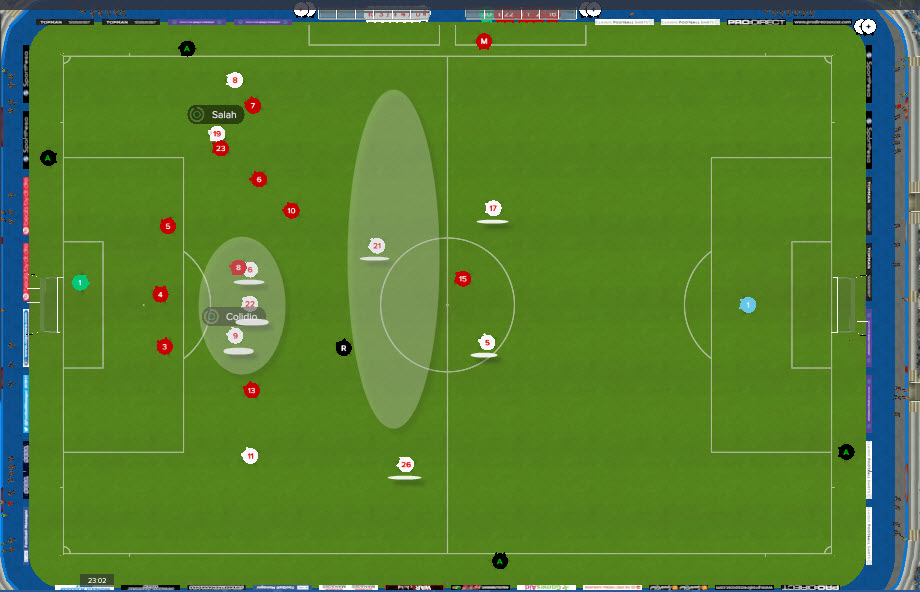 Here we see an example of the Leipzig attacking shape as they looked to force a breakthrough in the match. There is a clear overload in the central areas of the field with Klandt and Cerri having pushed forward to support Colido in the advanced area of the field.

It is the defensive balance of the structure however that is most interesting aspect with Junior retaining his deep position and providing defensive cover whilst at left back Arjan Hoxha has retained a more defensive position as opposed to advancing in to the final third and leaving his side susceptible to a counter attack. 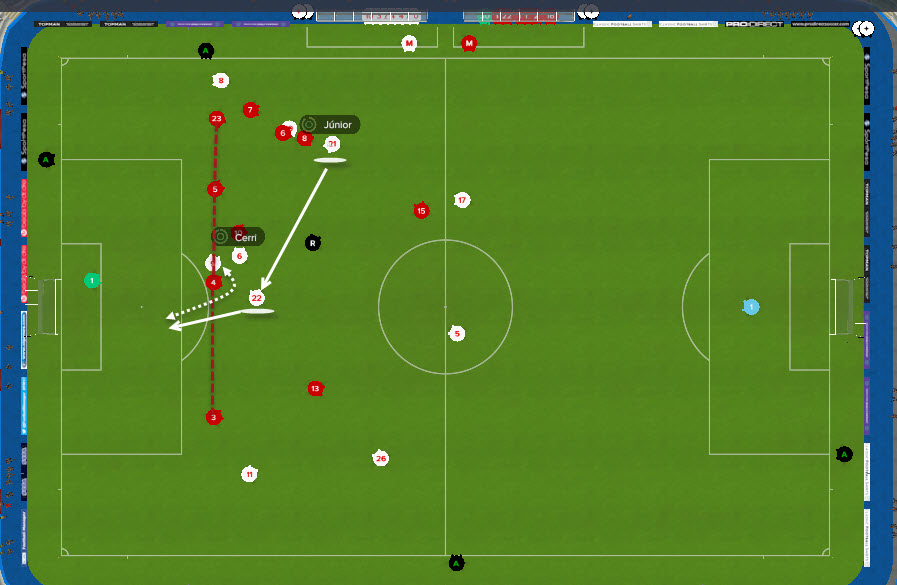 On this occasion Junior has advanced forward in to the final third to offer support to the attacking move and to play a key part in penetrating the United defensive unit.

As the play developed the United midfield was all dragged over to one side of the pitch as Leipzig threatened to overload that side and break through.

As junior moved to support the ball he offered the option to pivot and play the ball in to the underloaded space on the opposite side. As he played the ball across to Klandt we saw Colido come short before moving in behind the defensive line for an easy though ball.

The space between the Carajal at right back and the central defenders was far too stretched for them to be able to effectively defend. 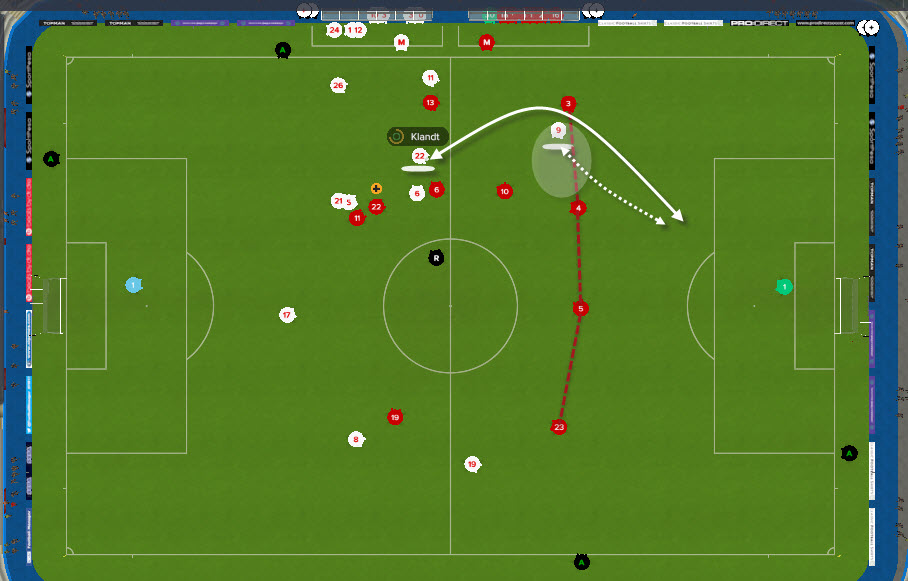 Here we see an example of Leipzig using a more direct attacking style to capitalise on the space behind the United back line.

As Klandt takes possession of the ball in the centre the general play is broken with little in the way of structure for either side and it is here that Leipzig look to play the direct pass to open up the game.

To clarify though a direct ball is not necessarily a long ball and there is a difference in playing vertical accurate balls in to the final third of the pitch and just kicking it aimlessly up the field.

Here the movement for Colido is key as he has taken up a positon on the right full back allowing him to attack the space between the right back and the right back. A simple through ball saw Colido break through for a chance on goal.

In the end a 1-0 win for Leipzig flattered the English side, for large sections of the game they were simply out played and out thought by their German counter parts.

United appeared short of creativity despite their much vaunted attacking quartet and the performance of Junior at the base of the Leipzig midfield was exemplary. At the same time Leipzig attacked intelligently looking to force the United defensive structure to over commit themselves to defending a single zone before shifting the focus of the attack quickly and intelligently.

In the end there was a clear and deserved winner, the only disappointment for Leipzig was the lack of goals to finish the game as a contest.