Manchester United get a lot of stick, particularly under Mourinho, for being a naturally defensive side. Indeed, United have conceded the fewest goals in the league this season, but at the expense of scoring goals themselves, with the second-fewest out of the current top-6. This is what puzzles many fans, seeing that they have one of the strongest collections of attacking players in the league.

Mourinho likes to set his side up in a standard 4-2-3-1. The way in which this operates changes drastically depending on the opposition. What makes Mourinho such a sought-after manager is his ability to understand how the opposition are likely to set up, then respond by countering the specific threats.

Possibly the most radical example of this was against Arsenal at the Emirates this season. He set his side up as the away manager, using the exact same formation as Arsenal, to counter their threats. By keeping most of his players behind the ball, he could feel confident letting Arsenal play the ball around their back three.

He kept the bulk of his players in his own half, meaning that if Arsenal wanted to keep possession, which they would, they would have to play the ball around at the back. He utilised the front three (particularly Lingard) as chasers, to hassle the Arsenal defence in their own final third, allowing his attackers to roam free. This meant that they could chase the Arsenal back three, helping defensively, but also meant that they couldn’t be tracked in an attacking sense either.

This clip demonstrates just how effective Mourinho’s big game style is. He nullifies the opposition attack by keeping men behind the ball, and asks an awful lot of his attackers to enforce an extremely aggressive press. Lingard just chases and chases the ball itself, while Martial and Lukaku cut off the passing lanes. Even when Mustafi gets away from Lingard, he doesn’t stop chasing, which is what forces Mustafi into his error. 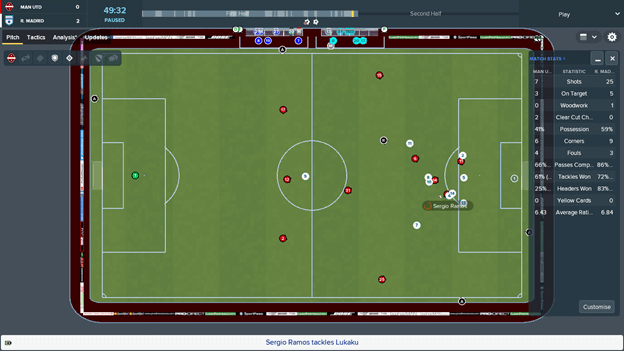 These images demonstrate how United operate against big sides. Most players do not join the attack besides the front three. In this instance, there is only six seconds between Real Madrid having possession and Lingard creating a goal-scoring chance. Purely by instructing the attackers to “Close Down More” and “Roam From Position”, they harass the defenders into making an error. 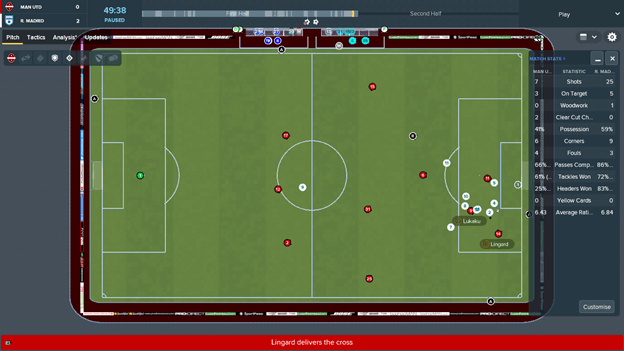 This screen also epitomises another feature of Man Utd against top teams. The stats bar on the right highlights how many shots Real Madrid have had in comparison to United. Most notably, Madrid have had 25 shots to United’s 7. By playing so deep, this does invite shooting opportunities from the opposition. But the stat below that illustrates what sort of shots these are, as Madrid only managed 5 on target. Mourinho allows shots on his goal, and can afford to ride his luck because of one crucial component to his team.

I don’t even need to show any clips of David De Gea to emphasise how important he is to the team. With such outstanding reflexes and shot-stopping, allowing the opposition time on the ball is less of a problem. Many consider De Gea to be the best goalkeeper in the world right now, and its hard to argue with Manuel Neuer injured. 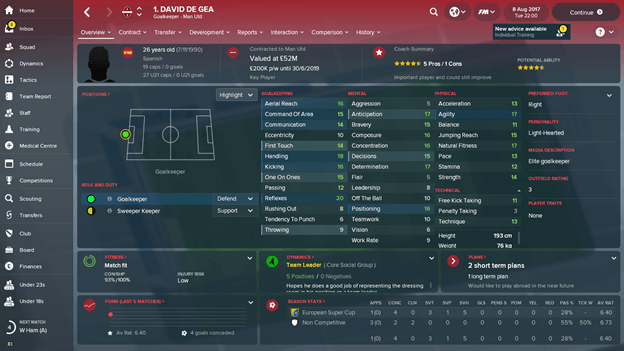 Therefore, unless you actually play as Man Utd on FM, you aren’t going to be able to use De Gea, or any goalkeeper that can stop shots like him. In your save, if you use the Mourinho tactics, be sure to use a keeper who you have some basic confidence in to stop shots. Otherwise the whole tactic will backfire massively.

Now, United don’t always play against top teams. Against the lower ranked sides, their attack is actually remarkably similar. A mixture of Lukaku, Lingard, Martial, Rashford and Mata, all switching and alternating positions, much like in the clip against Arsenal earlier. The difference against lower ranked teams is that the midfield sits higher, because they can afford to. This takes the pressure off the front three to do so much running, as the midfield can press too.

This clip demonstrates this interchanging of positions, and how it can catch out unsuspecting defences. What may confuse the Man Utd attack, however, is the recent arrival of Alexis Sanchez.

While it is true that the Chilean does like to shift position, drifting in from the left hand side, he might not do it with the same fluidity as the rest of the United attack. He operates best by remaining on the left for as long as possible, before cutting inside for a shot or through ball. As good as he is, he rarely impacts the play when he picks up the ball on the right or in the centre. The following two clips demonstrate that.

In this first one, he only pulls inside once United make it to the opposition box. He still remains on the left hand side though, so that when he receives the ball, he has the angle to take on players, and get a shot away. When he’s in the box, in his familiar position, he is one of the best at wriggling away from defenders.

In the centre of the park, where he would be expected to interlink with Lingard and Pogba, he doesn’t have as much of an impact. This clip, although early in the game, illustrates that. He receives the ball in the middle, and does manage to get away from the first defenders, but is then crowded out by the second. This is why he prefers the left-hand side. He can impact the game at his pace, taking on one player at a time.

This can make him rather predictable. Still doesn’t mean defenders can stop him, but at least they know where he’s going. On FM, the ideal way to counter this and keep the opposition guessing is the “Swap Position” function. By using Lingard and Sanchez as inside forwards, and having them swap positions intermittently, this controls the half spaces and final third areas behind Lukaku. 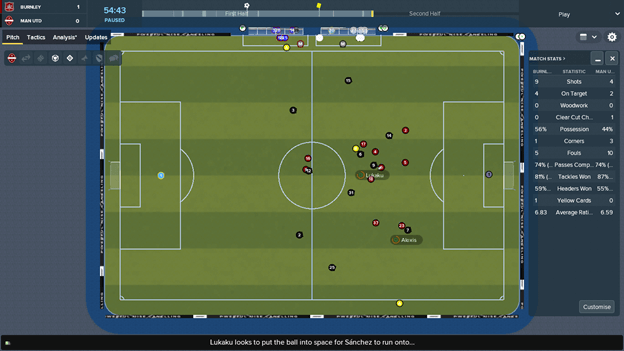 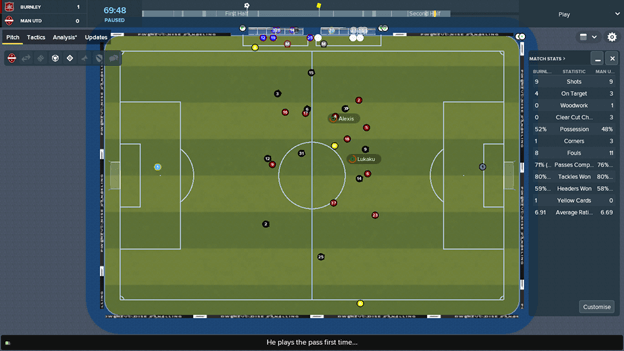 Compare these two situations. In the first, Sanchez is on the right, peeling away from the unaware Burnley full-back. Lukaku has come deep, which allows the space for Sanchez to run into. In the second, below, Sanchez and Lingard have flipped. Alexis is now on the left in the hole, and it is Lukaku looking to spring the defence to find the goal. 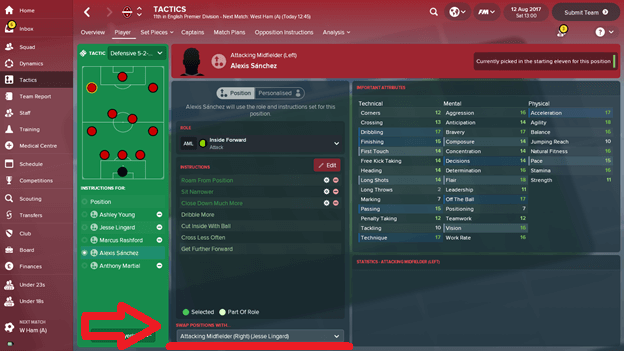 This shows the power of the “Swap Position” tool. The opposition defence cannot keep track of three players who are roaming from a position, particularly if two of them continuously change their dominant side. 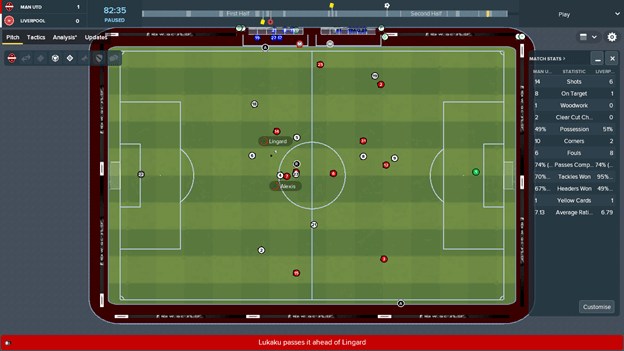 These images sum up how this style of attack can unlock defences. Here, Lukaku has come deep once more, with Lingard and Sanchez going beyond. The CAMs link up, passing it between them, one by one removing the Liverpool centre-backs from the play. 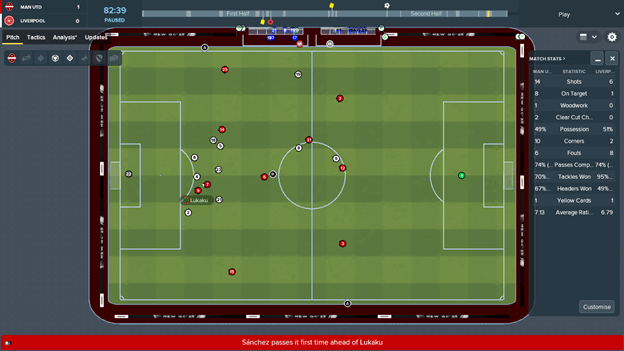 Within no time, Sanchez has the ball back, but now Lukaku has made his run, untracked, from deep, and is one on one with the keeper. (Spoiler alert though, he misses).

The best way to achieve this is to use Lingard and Sanchez as CAMs rather than wingers. Using them as attacking midfielders means that they are exempt from specific instruction, so can roam and impact the play how they see fit. This also puts them closer to Lukaku, making it easier to interlink with the striker. A key instruction for them though is “run wide with ball”. This ensures that they stay inside to pack the midfield and use the hole, but if they have the ball at their feet and space to move into out wide, they exploit it. 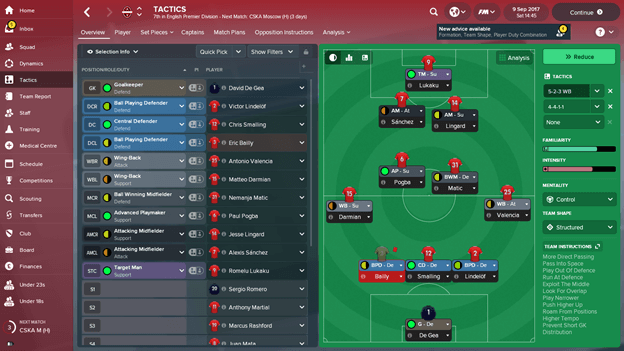 What should also be noted in these images is that the wing-backs are poised and ready to help the attack. This is how Lukaku can really impact the attack. As good a striker as he is, he is best when attacking the ball in the air, using his strength to get in front of defenders to score.

Floated crosses require minimal effort from the crosser, much less so than whipped balls into the six-yard box. Therefore, even the least experienced crosser of a ball can deliver it on a plate for someone like Lukaku, who gives United that extra dimension in attack.

Overall, it is hard to emulate the current Man Utd team in Football Manager, without spending most of your time analysing the opposition before each game to assess the strengths and weaknesses. The important thing is to keep that attack fluid, and the goals will come.