The 2014 version of Football Manager was a little revolution in terms of possibilities offered for teams’ tactical set-up. Eight new roles were introduced. While FM users explored to the fullest the new horizons open by the False 9, the Shadow Striker or the Complete Wing-Back, very few dared to look into the opportunities offered by the Wide Target Man.

Fast forward a couple of years. Juventus was receiving Lazio in Serie A in January 2017 and Allegri had decided to go all-in and organise his team with a 4-2-3-1. Dybala, Pjanić, Mandžukić, and Higuaín all played together. Newspapers in the Peninsula immediately dubbed the tactics as 4-2-artistry. The thing that caught my eye though, wasn’t much the attacking mentality, but watching Mandžukić terrorise the opposition full-back from his position as a winger. Allegri was using a card that many have ignored at FM, he was using a Wide Target Man.

I have always been fond of tactical experiments that recreate systems used in real life football. So I decided I will try to see how to best exploit a WTM in FM17.

So, who is the Wide Target Man?

“The Wide Target Man will be the main outlet for clearances and long balls from the back. Ideally positioned against a smaller and weaker full-back, he will be asked to get hold of the ball and keep it before recycling it to a team-mate.”

Reading the description of the role, I wouldn’t think of many other players other than Mandžukić who fits the bill so well and images speak louder than words most of the times:

The WTM is an incredibly all-round role. Depending on the situation, his positioning will be that of a winger, putting crosses and passes into the box or almost as a second striker, coming from the flanks to be the receiver of crosses coming from the other side.

But his contribution is not limited to the attack. As shown in the picture above, the WTM will assert his influence all over the pitch. His physicality will help as much in defence as in attack.

What to look for in a WTM?

Surely, as for any other role, the more complete the player, the best he will be. First touch is surely the most important technical attribute, as he will deal with loads of long balls cleared to the flanks. Heading and Passing are also important.

But I think, for how the player is instructed to act, that in the WTM, mental and physical attributes might be more important than technical ones. Imagine him as a different kind of water-carrier, going up and down the flank to hassle the opposition full-back and fighting for second balls. In this regard, Anticipation, Off the Ball, Teamwork, and Work Rate are all attributes you would want to look at.

Though your WTM doesn’t have to be a giant, look for players that are at least 1.80m (5.11ft) with an important Strength attribute and good Jumping Reach. Some Agility and Acceleration wouldn’t hurt as he will surely be facing a full-back for most of his 1v1. Cristiano Ronaldo and Gareth Bale make some incredibly well-rounded WTMs.

How to best exploit a WTM?

To best exploit the WTM in our tactical set-ups, we have to bear in mind that contrary to the Winger or the Inside Forward, the WTM does not run into spaces, he creates them. We must associate him with roles that are best suited to benefit from his physical work on the flanks.

By keeping in check the opposition full-back, a WTM will allow us to use an attack-minded lateral pairing, by associating him with a Wing-Back for example. That is that best way to create dangerous overlaps on his side of the pitch. 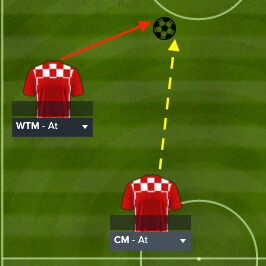 In the midfield, it is better not to use playmaking roles close to the WTM side. Playmakers will tend to keep the ball and to put others into the box via through-balls rather than make runs themselves. So, either in CM’s strata or in the AM’s one, we would want a player able to exploit, with his runs, the WTM’s passes and crosses into the box. A Central-Midfielder with attack duties or Box-to-Box are ideal to set in motion these movements. Higher up the pitch, a Shadow-Striker or an Attacking-Midfielder are equally suited.

On the attack line, I’ve already touched to the fact that on many occasions, your WTM will cut from the flank to become a second striker. To best exploit this movement, we can position a Winger on the opposite side that puts crosses into the box. Those crosses will become particularly dangerous because, even using a lone striker, we will have two players good with their heads, each cutting to a different post, thus multiplying the danger posed to the opposition defence. 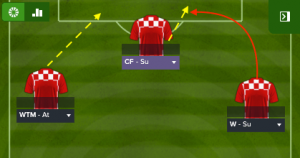 Last but not least, one should consider the importance of a WTM in set-pieces, both defensively and offensively. The WTM basically adds another player with good heading capacities to the usual trio of centre-backs and striker. I especially have found important  his role in throw-ins. By placing himself as the receiver, able to use his strength to hold-on the ball, the WTM will free the striker to be in a much more central and dangerous position in attacking throw-ins.

In terms of general Team’s Instructions and style of play, do not see the WTM as a role only suited for kick & rush football. It is a complete role that does more than simply protecting long-kicks’s balls. With the correct set-up, he can synergy with his team-mates to create complex movements and counter-movements that will unsettle the opposition defence. Certainly, if your style likes the ball cleared into the flanks and if you tend to exploit the flanks of the pitch to let you CMs and striker run into the box, the WTM is a role worth considering. Pass the ball into space is another TI that maximises the strengths of the WTM.

On the other hand, if you like to play with two or even more playmakers at the centre of the pitch and rely more on movements with the ball than without, you might look for another role.

To conclude, the Wide Target Man it’s more than a big guy heading the ball, he adds another dimension to your team, particularly on the flanks. To sum up his strengths:

There would be much more to add and go into further detail on how to best use your WTM and how to set-up a successful system around him. But I wanted to present a brief, albeit as complete as possible, assessment on an often overlooked role.

If you want to continue the discussion, I invite you all to comment the article. And while you are there, check my profile and hit me on Twitter to keep in touch and see what else I’ve been up to recently!