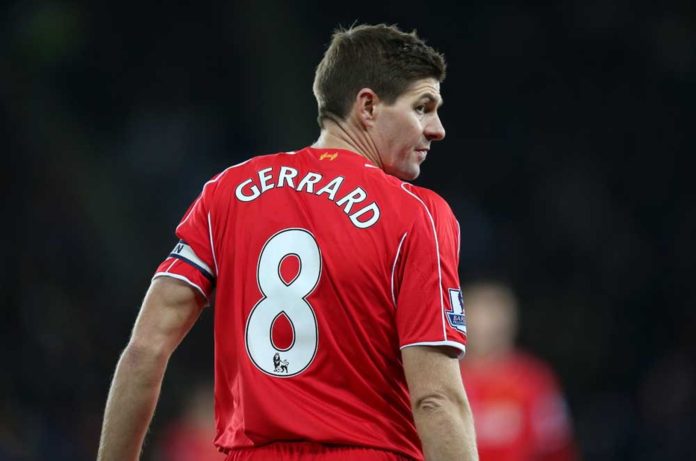 Liverpool legend, Steven Gerrard, recently announced his retirement from the game after his contract expired at LA Galaxy. Unlike his former team-mate and friend Jamie Carragher, Gerrard has set his sights on a career in management and was offered the MK Dons job which he rejected. The former Liverpool captain is now set to take a coaching role at his beloved club Liverpool.

Using Football Manager 17, I put Steven Gerrard as Liverpool manager for the 2017/18 season to see how the club legend would perform if given the reigns at Anfield. 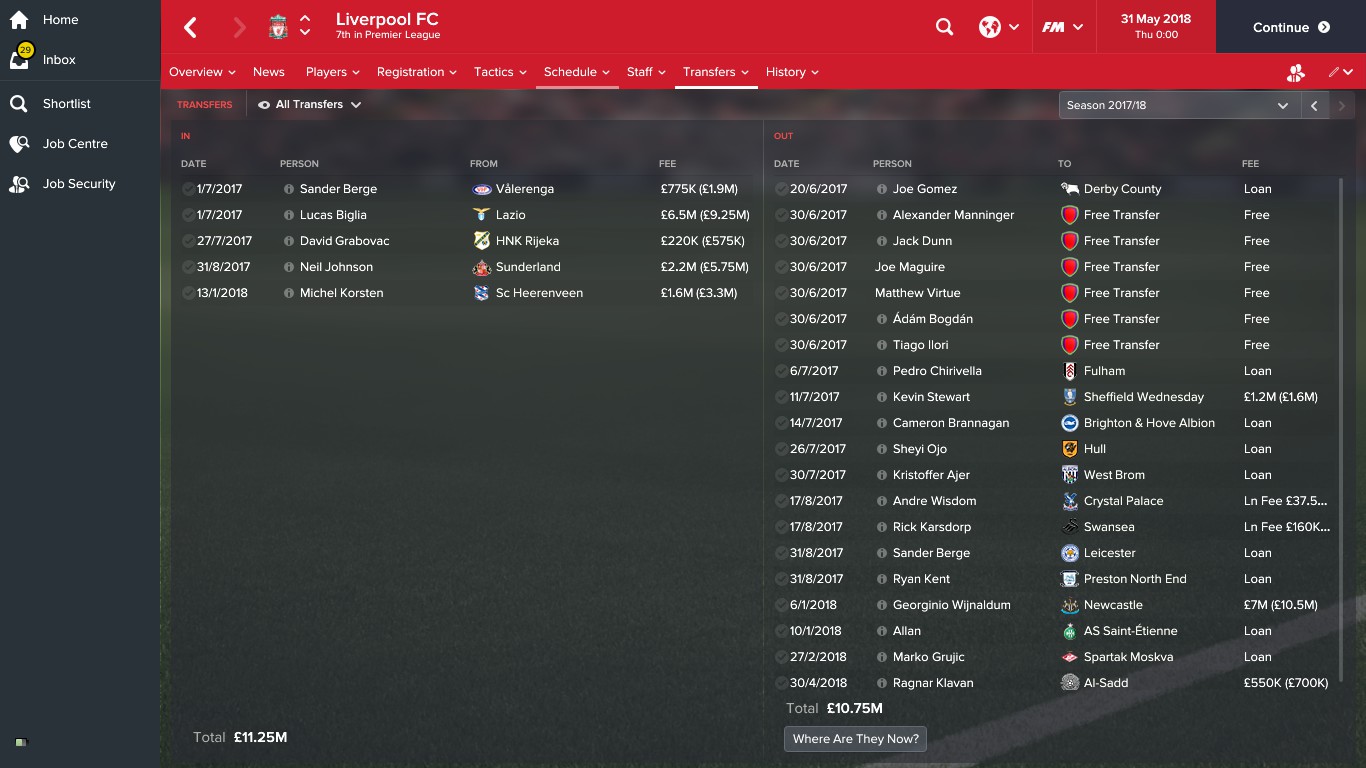 Perhaps due to his lack of experience, Liverpool’s owners, Fenway Sports Group, severely restricted Gerrard’s transfer budget in his first season in charge. Gerrard was given a minimal amount of money to improve Liverpool’s squad; who finished 10th in the previous season’s simulation.

The only major signing during Gerrard’s time in charge was the £6m capture of Lazio midfielder, Lucas Biglia. The Argentine is a robust defensive midfielder but isn’t a long-term signing at 32 years of age. He also completed a deal for Valerenga youngster Sander Berge which could rise to £1m depending on performance-based add-ons.

Despite there being no incomings, Gerrard was quick to change his Liverpool squad with many players leaving Merseyside. Adam Bogdan, Tiago Ilori, and Alex Manninger were released on free transfers while youngsters such as Pedro Chirivella, Cameron Brannagan, Sheyi Ojo and Marko Grujic were loaned out.

Ex-Tottenham midfielder, Kevin Stewart, was told he had no future at Anfield and left the club for just £1.2m headed for Sheffield Wednesday. Surprisingly, Gerrard found no plans for Jurgen Klopp’s £25m signing Gini Wijnaldum, who was subsequently re-sold to former club Newcastle for just £7m. 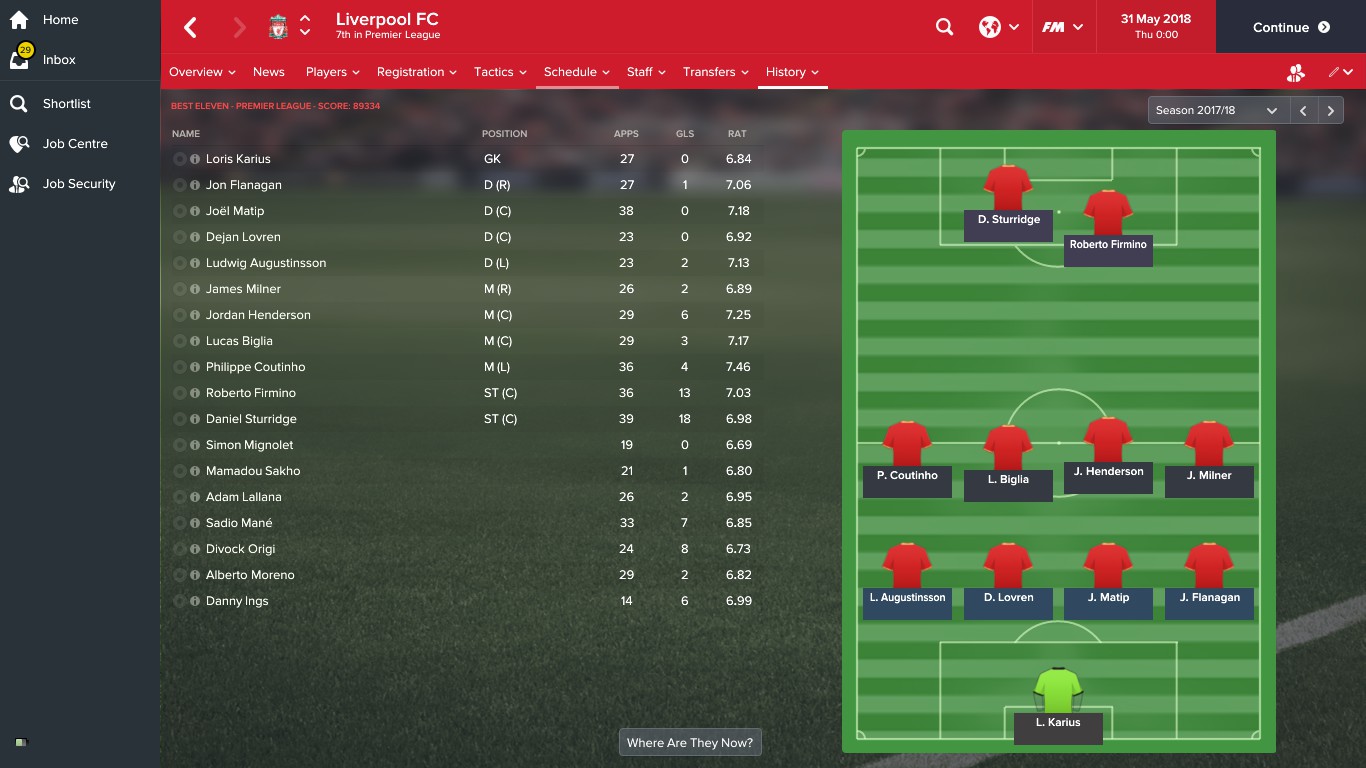 Klopp has favoured a 4-3-3 system with Liverpool using Philippe Coutinho and Sadio Mane on the wings with Roberto Firmino acting as the central striker. Gerrard reverted back to a more traditional 4-4-2 after taking over the club.

Loris Karius retained his place between the sticks leaving Simon Mignolet on the bench for the majority of the season. At right-back, Gerrard was forced to use Jon Flanagan as persistent injuries to Nathaniel Clyne restricted his playing time. The former England captain kept Joel Matip and Dejan Lovren as his preferred centre-back pairing with James Milner moving from left-back to right midfield. He was replaced by Copenhagen left-back, Ludwig Augustinsson, who was a January signing by Klopp.

Biglia partnered captain Jordan Henderson in the centre of the park with Coutinho occupying a familiar role on the left of midfield. Firmino kept his place in the starting eleven, operating as a centre forward behind Daniel Sturridge in the Liverpool attack.

Unsurprisingly, the stand-out player of Gerrard’s reign was Coutinho. The Brazilian has been in great form for the Reds this season and FM predict that the ex-Inter playmaker will continue to impress. With an average rating of 7.46, he was named their player of the year and earned a place in the PFA team of the year.

Sturridge and Firmino also blossomed as a striking duo, netting 31 goals combined over the course of the season. 14 of Sturridge’s strikes came in the Premier League with Firmino registering nine assists in the league.

In defence, Matip was again a consistent performer with an average rating of 7.18 in 38 appearances; the second highest appearance total under the tutelage of Gerrard. Flanagan also impressed when called upon meaning the blow of losing Clyne was softened.

There was to be no happy return to Liverpool for £20m winger Lazar Markovic following his loan move at Sporting Lisbon. The Serbian made just 10 appearances all season, scoring just once. The ex-Benfica man was transfer listed after being told he was surplus to requirements with Liverpool looking for just £10m in return for his services.

Danny Ings was also kept out of the side for the majority of the season due to the form of Firmino and Sturridge as well as Gerrard preferring to use Divock Origi off the bench. Adam Lallana also found himself on the fringes of the starting XI as he struggled to find a role in Gerrard’s 4-4-2 system. 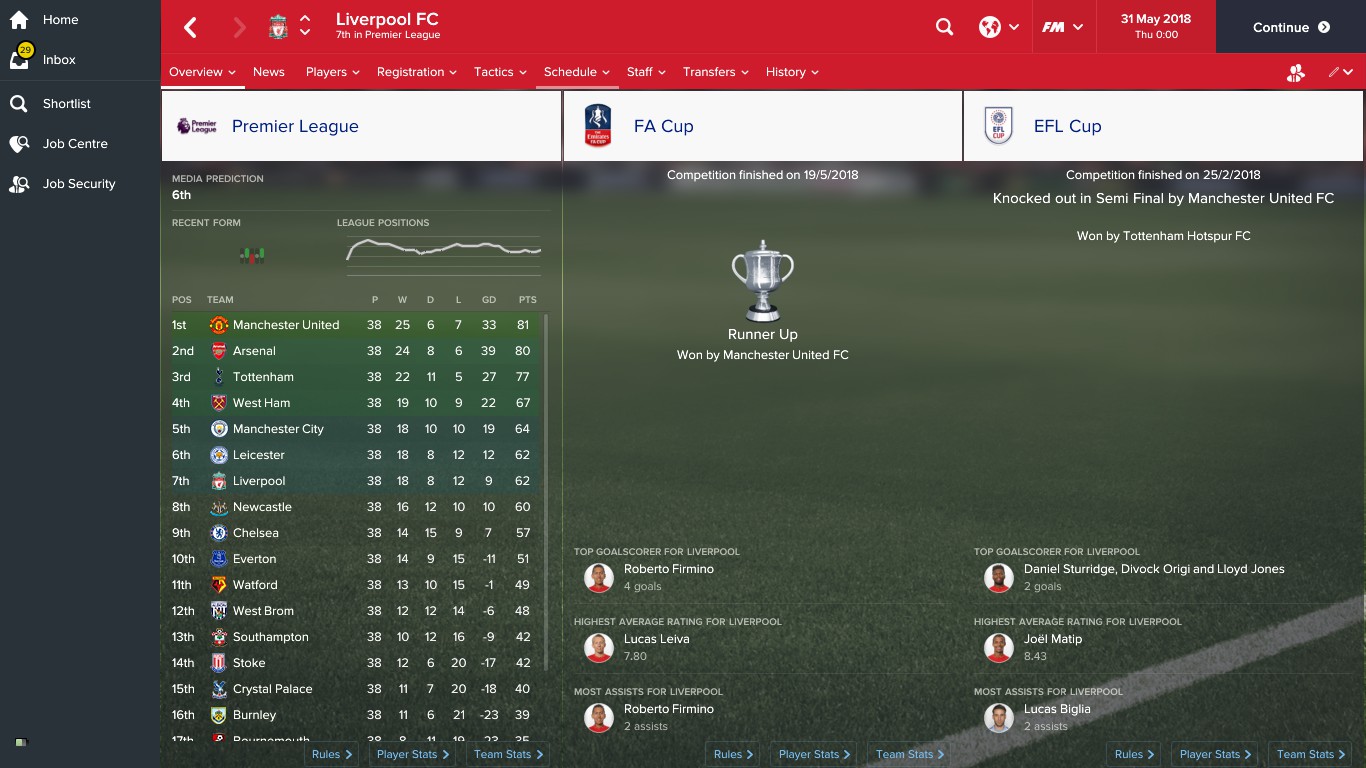 Just like the previous season under Klopp, Liverpool struggled immensely in the league. Things started great for Gerrard, guiding the Reds to an unbeaten start until the beginning of October; beating Southampton and Manchester City away from home.

However, over the busy Christmas period, Liverpool’s form started to tail off. Defeat to West Ham at the London Stadium started a run of five games without a win in the league including losses against Manchester United and West Brom at Anfield.

This poor run of form sparked a mid-season revival as the Reds went on an eight-game win streak during January and February. However, their inconsistency continued throughout towards the end of the season meaning Liverpool finished in 7th place.

In the cups, they were knocked out of the EFL Cup in the semi-final by Manchester United, losing the away leg 1-0 at Old Trafford. They came close to lifting their first trophy since 2012 by reaching the FA Cup final but were crushed by the Red Devils again with Paul Pogba scoring two in a 3-1 win at Wembley.

Liverpool’s form under Gerrard was incredibly inconsistent. Two impressive unbeaten streaks were coupled with two large winless runs meaning they lost ground in the race for the top four. Liverpool’s lack of investment also hurt the squad with league rivals such as Manchester United and Manchester City spending well over £100m in the transfer windows. Overall, considering it was Gerrard’s first venture into management and the lack of investment, Gerrard’s first season in charge wasn’t all that bad with plenty of room for improvement if FSG can back him financially.

Did you enjoy the post?  Never want to miss one again?  Then subscribe to the email newsletter!