Welcome back to the south coast, where I’m attempting to steer AFC Bournemouth away from the drop and to a respectable Premier League place this season! At the end of the last episode, I’d written that I was happy with the start of our league campaign. But, on further reflection, I have no idea why.

Struggles to score more than one goal, combined with a defence who resembled a Sunday League outfit at times, made me realise how lucky we were to get through our first competitive matches unbeaten – and with two wins.

It was time for a change of tactic.

At the start of pre-season, I had created two formations which I believed would make me solid at the back and hold a threat on the counter-attack, using the pace available down the wings to provide Jermain Defoe with chances. But for reasons still unknown to me, it left us far too exposed in the midfield and unable to provide poor Jermain with any kind of service.

My fall-back option was a five at the back formation, using wing-backs and one striker up top. But this failed to impress me in pre-season, and I only plan to use it whenever we are facing the likes of Manchester City, United or Chelsea away from the home comforts of the Vitality.

So instead, I went to work on creating a new formation which would hopefully solve all our problems. 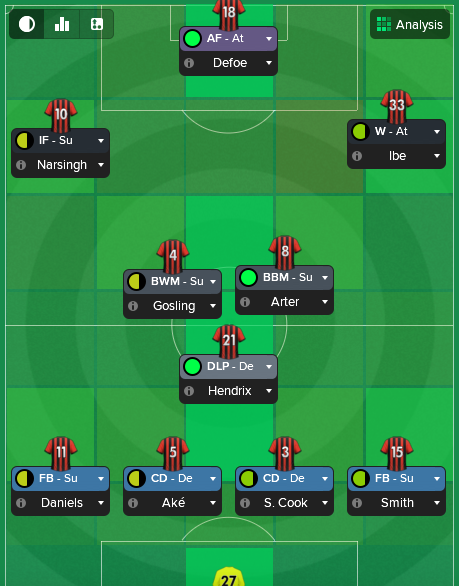 Jorrit Hendrix was originally brought in to play in a ball-winning role in midfield, but Dan Gosling got the nod for the next run of fixtures despite not particularly specialising in the position.

Having Narsingh and Ibe on the wings provided a rapid outlet on the counter-attack, that’s if our defence began to head crosses out of our penalty area for once, and not towards the feet of an opposing striker.

With the changes made, and an important run of fixtures ahead, we kicked off against Huddersfield at home.

Frustratingly, despite a good first half, we conceded on the cusp of half time. I decided to hold off on making substitutions until the hour mark, and then introduced Josh King and Lewis Cook.

The fresh legs did the team the world of good, and King equalised after 75 minutes. From the touchline I urged the team forward, and Defoe grabbed himself two more to wrap up a 3-1 victory.

The result proved to me that, with the right kind of tactic, we have goal scorers throughout our side.

Watford were the next side to visit the Vitality, and I set up with the same tactic that had proved so effective against the Terriers. After another tight first half, Jorrit Hendrix handed us the lead with a cheeky free kick, which he placed over the wall and into the goalkeeper’s near post.

Narsingh then put us two goals in front, after King headed the ball down inside the six yard box for our new signing to bury. But just as we looked set to cruise through additional time, Watford pulled one back through Troy Deeney after another example of loose marking inside our box.

A Migel Britos own goal restored our two goal cushion after 95 minutes, but somehow there was still time for Andre Carillo to pull another back for the Hornets. We had another three points and an unbeaten start to our league campaign, but I was still annoyed at how poor we were defensively.

Next we travelled to Brighton and Hove Albion, aiming to pick up another win against a side likely to be in a similar position to us at the end of the season. After a strike from Anthony Knockaert, who literally placed his effort at the back post through Asmir Begovic, and Defoe’s equaliser, we entered the break at one goal apiece.

We were sloppy in possession and very fortunate to be on level terms. Francis was being outpaced by Knockaert every time, so I brought on the slightly faster Adam Smith and Fraser for the ineffectual Narsingh. But frustratingly we were unable to find a way through – Callum Wilson saw two late one-on-ones saved by Matty Ryan in stoppage time, so we had to settle for a point.

The final match of this episode is the third round tie with Crystal Palace in the Carabao Cup.

The result really did flatter Crystal Palace in the end. Despite what the stats show, we dominated the game and created the better chances – the new tactic implemented in the last few games is really starting to take effect. We battered Palace in extra time, and thoroughly deserved King’s late winner.

Our opponents for the fourth round will be revealed in the next episode, along with the results for the next month or so of important fixtures!