It’s not been a regular occurrence this season to see PSV as anything other than favourites in a domestic fixture. Today that honour is given to the visitors, Ajax, who currently hold a one point lead at the top of the table. The bookmakers have given an Ajax win odds of 6/4 in a match that will shape the ending to this Eredivisie season.

Alongside the known absence of Andres Guardado, Nicolas Isimat-Mirin picked up a training injury that will see him miss the next few games. A move to a cautious 4-1-4-1 has been facilitated today in an effort to control the game more effectively.

Ajax are without solid defender Joel Veltman who is recovering from a sports hernia. 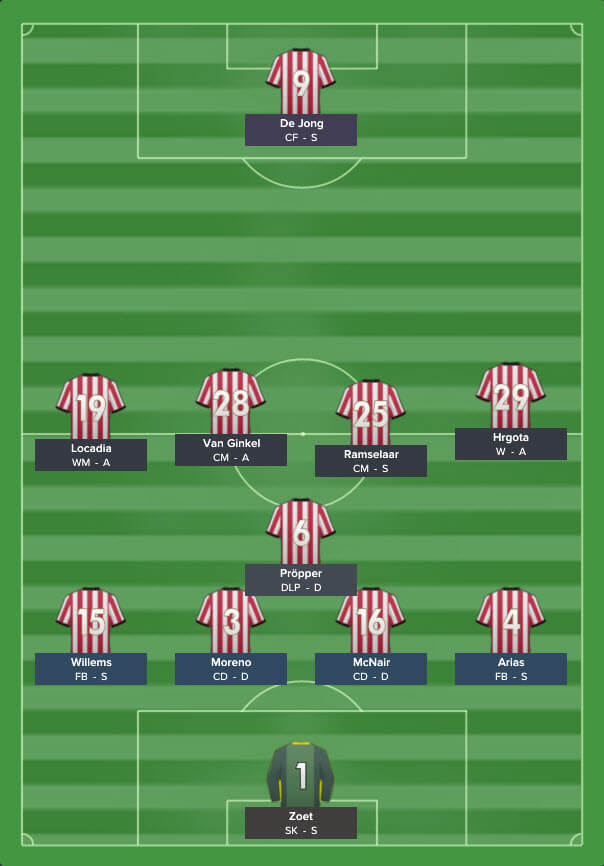 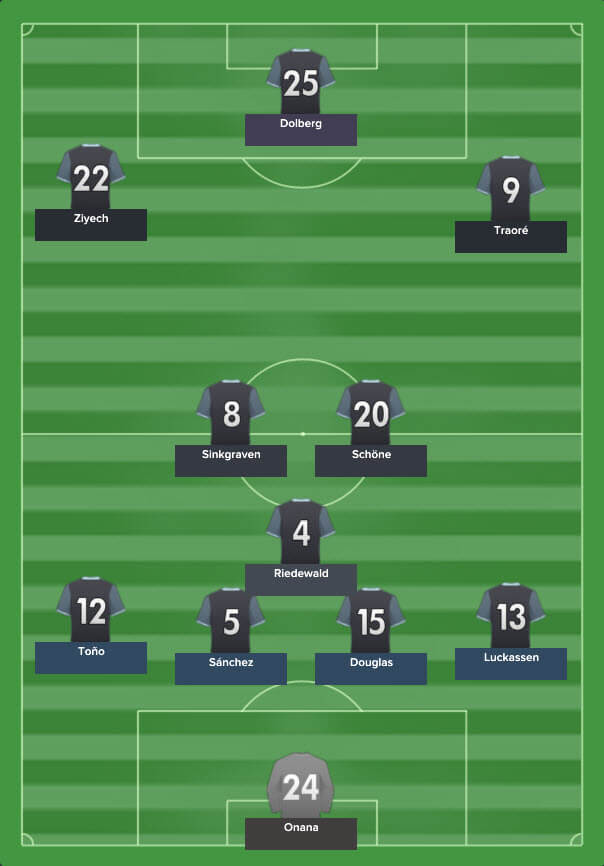 Ajax test the PSV resolve early as on 9 minutes Ziyech puts a teasing low ball into the box but Jeroen Zoet comes out to claim it with confidence.

A game changing moment arrives with only 17 minutes gone. Ziyech and Arias battle for the ball in the PSV half when suddenly Arias dives in with two feet. The referee has no hesitation in flashing a red card and PSV are reduced to 10 men with 73 minutes of the game still to be played.

Branimir Hrgota is the man to make way, Daniel Scwhaab takes his place to move into the vacated full back slot. PSV switch to a 4-1-2-1-1 narrow diamond with Locadia in behind Luuk de Jong in Attacking Midfield.

PSV don’t neglect their attacking priorities despite being a man down. Daniel Schwaab receives the ball on the 18 yard line but his shot is over the bar.

Just before the half, Ajax launch an attack of their own – their first since PSV lost Arias. Luckassen’s cross ball from deep is met by the head of Hakim Ziyech but the ball drifts harmlessly wide.

Despite the number disadvantage, PSV are not out of this game yet! 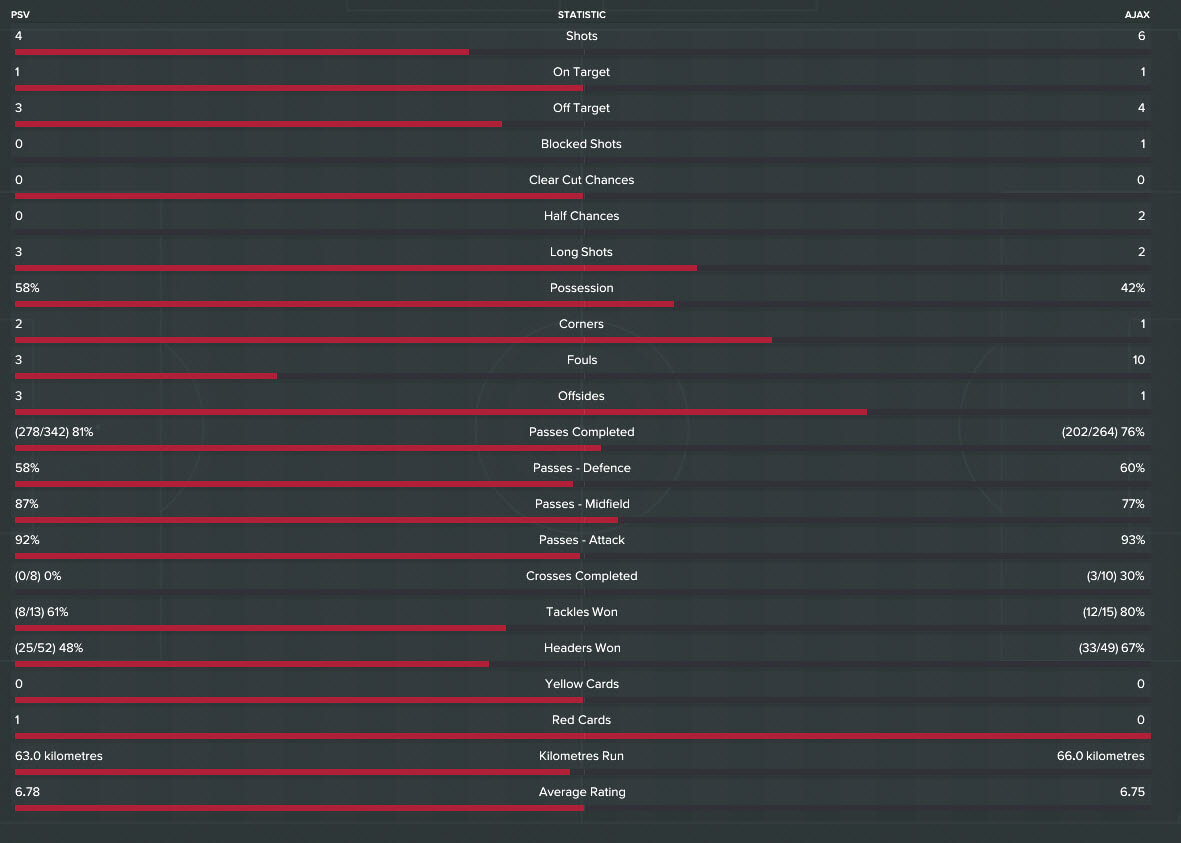 Feeling the need to take advantage, Ajax have switched to a 3-4-3. With the chance of gaps opening in the 3 man defence as they split wide, Jurgen Locadia will play as a Shadow Striker. 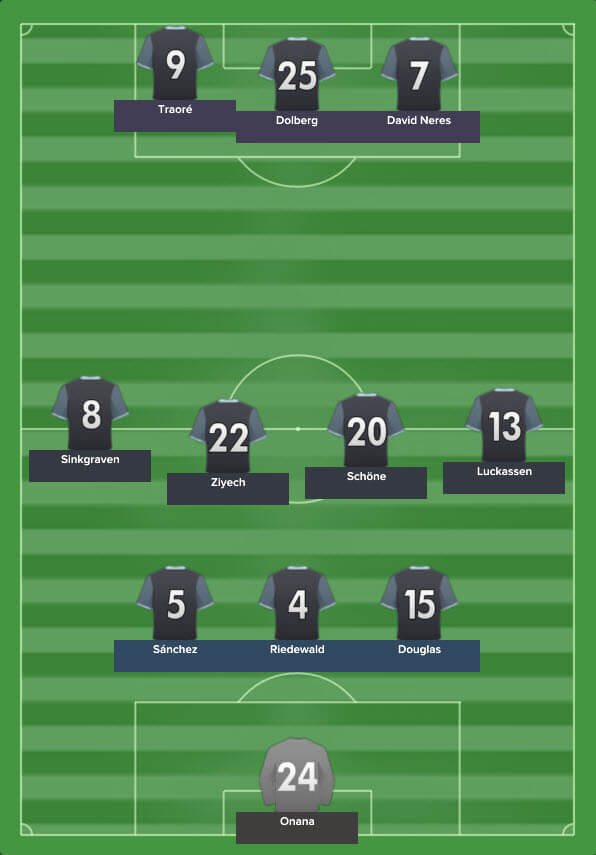 The gaps do open up as expected! The first to look to take advantage is Bart Ramselaar thanks to an incisive PSV breakaway but the midfielder’s shot is straight at Onana.

On 55 minutes Ajax press forward. A long ball to Sinkgraven on the wing then finds its way into Kasper Dolberg, the young Dane’s header is well saved by Jeroen Zoet and out for a corner. The corner is a poor one and easily cleared by PSV.

Jurgen Locadia finds himself some space in behind the Ajax defence, Luuk de Jong supplies him the ball but Locadia can’t find the target with his shot.

It’s end to end stuff now as on 59 minutes a Hakim Ziyech corner is headed just over the bar by defender Douglas.

With half an hour to go, Siem de Jong replaces Jurgen Locadia. Jetro Willems is encouraged to play as a Complete Wing Back and Schwaab is told to push inside as an Inverted Wingback.

PSV continue to attack with fervour. Luuk de Jong fashions a chance for himself from the edge of the box but Onana saves again!

In the 86th minute Siem de Jong receives the ball from a Schwaab throw, turns into the box and crashes a shot against the post and wide.

The final few minutes are littered with too many chances to describe in details. Both PSV and Ajax throw everything at the game but neither side can come up with a goal to break the deadlock.

That final 10-15 minutes was some of the most exciting football that the PSV fans will have witnessed all season long. A solid performance from PSV despite being a man down for the vast majority of the game. 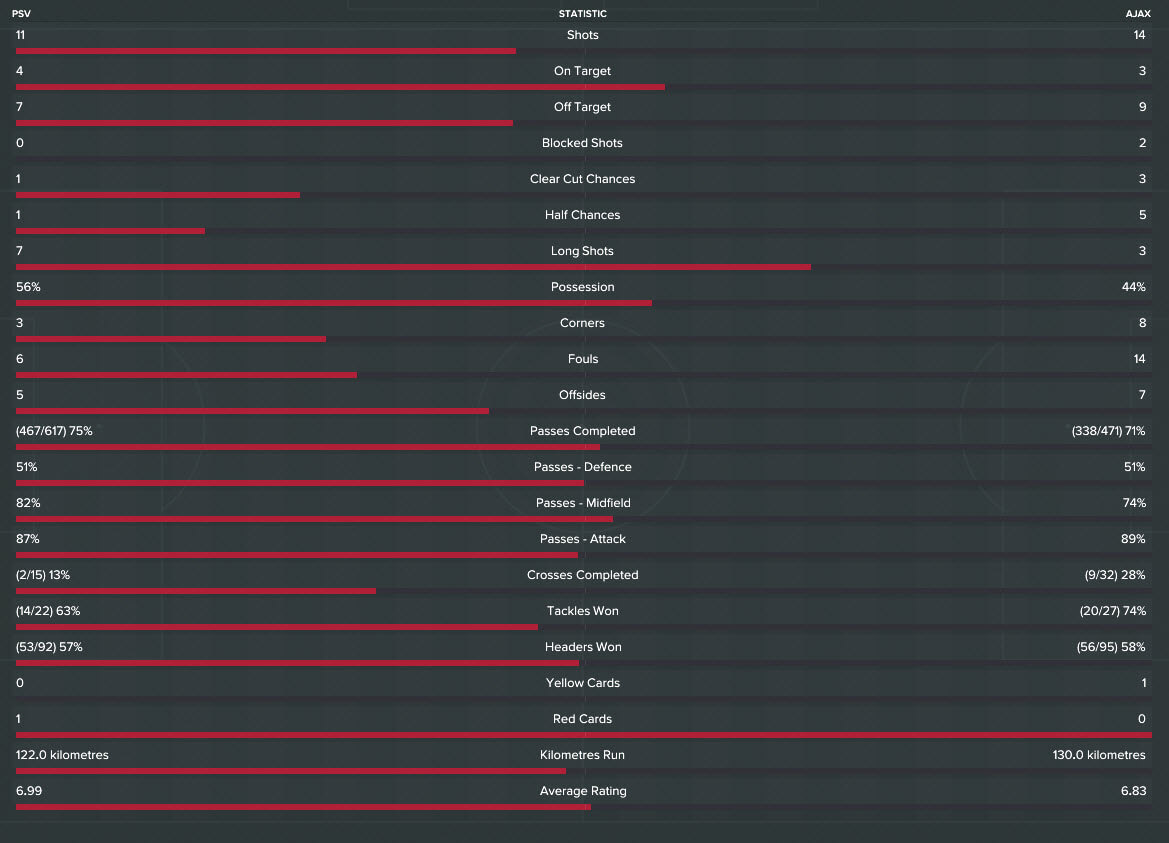 That result keeps the league tight at the top but PSV still rely on Ajax slipping up in their final four league games. 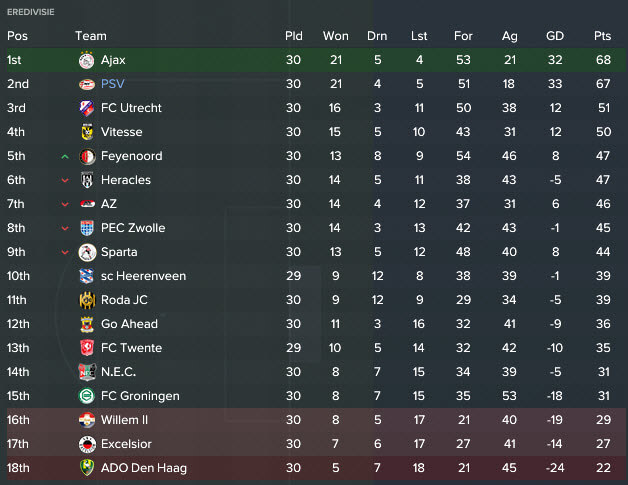 PSV host an overachieving Heracles side who sit in 6th place in the Eredivisie at this point in the season.