The Colombian league, or the Liga Aguila, is divided into two parts. You have the opening stage (Apertura)and the closing stage (Clausura). There are 20 teams in the Liga Aguila. You play each team once in every stage and just like in Argentina, there’s an extra round where you face your local rival. After these 20 games, the top eight teams go into a playoff system. If you succeed in winning the playoffs, you’ll qualify for the Copa Libertadores. There are 7 teams who usually compete for the title. As shown below, there are three big rivalries between these teams. Junior’s biggest rivalry is against Union Magdalena, but they play in the 2nd tier. There is also the Copa Aguila with a continental competition spot up for grabs. Relegation is decided via an average point system. Only two teams go down if they have the least amount of points over the last 3 years. 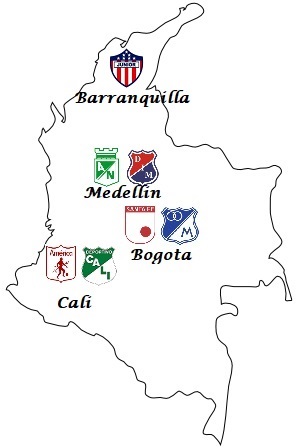 5 tips on how to survive in Colombian football

If you want to win the league and compete in the continental competitions, these Medellin-based teams are a good shout. They have probably the best facilities and resources and got some quality players. Juan Fernando Quintero, a former wonder kid, plays for DIM. After his failed spell in Europe, he’s back in Colombia and still has a lot to offer. Can you unlock his potential?

Envigado is a small club based just outside of Medellin. The club doesn’t have a great fanbase as most of these fans either support Nacional or DIM. The club has a real warm feeling, a lot of the fans in the stadium are families with their kids. They play in bright orange jerseys and are therefore nicknamed El Equipo Naranja. Apart from its location, Envigado has another reason you should choose them. Despite being a small club, they’ve produced some of the best talents in Colombia and are known for their youth setup. With well-established youth recruitment, excellent junior coaching, and great youth facilities, Envigado is the perfect club to start a long-term save. Fredy Guarin and James Rodriguez both started at Envigado. Can you create the next Colombian superstar?

Millonarios has one of the biggest fanbases in Colombia and is based in the capital of the country, Bogota. However, the club has been outshone recently by Atletico Nacional. Could you bring back the success to the capital of Colombia?

To sum it all up, Colombia is a very exciting nation to manage in. The country has a large background and some amazing youngsters. You could make quite a story here! If you want to know more about the Chilean league, make sure to tune in next week!