And there we are: purgatory. Only three matches away from the Promised Land. We start our road to the Premier League against our rivals Derby County. We have a mixed record against our neighbors. The first match at the iPro Stadium on December 10th was lost 2-1, but we set the record straight at the City Ground by winning 1-0. But the play offs do funny things to players. Some will buckle, others will shine. I hope my determination focused transfer and selection policy will pay off and make my players shine.

The positive mood is a bit put down by the following news:

This has caused me to research the financial state of the club, since that’s not something I regularly look into. Even though I have a surplus of £71,570 per week in the wage budget, things are not looking good. The current balance of the club is minus £3,230,000 and we stand to lose another £ 3,910,000 this season. Besides, the club has a net debt of £ 4,390,181. What all these numbers mean is that promotion will no longer be considered as a ‘happy accident’, but as a way to guarantee the financial stability of the club. If we don’t get promoted, I might have to be forced to sell one of the crown jewels (Assombalonga, Lansbury, and Osborn) to keep the club healthy. That would throw us back a few steps and will make it very difficult to reach promotion playoff places next season.

That being said, let us focus on what we can do on the pitch to remedy this dire situation. We will miss our captain Chris Cohen during the play offs. He tore his hamstring during the match against Ipswich Town. Normally, I’d play Thomas Lam instead of him. But this being the playoffs and all, I blow the dust of Pajtim Kasami and give him his first run in the team since February 11th. But he has been playing regularly in the U23s, so he’s match fit and ready to go. Hopefully, he’ll give us a fantastic going away present before returning to Olympiakos. Another returnee is Dani Pinillos, who has recovered from his injury and will take Fox’ place at left back.

Our first match will be at the City Ground, and I choose the more attacking formation with my wingers at the AM strata. With the exception of Cohen, everybody is fit and ready. I hope it is enough. This is going to be very tight. 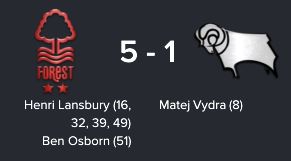 I look at the scoreboard and back at David. I tell him to pinch my arm, which he dutifully does. I fine him £10 for pinching my arm, because I’m still the manager and you just don’t go around pinching the manager, now do you? But it is quite incredible what has happened on the unsuspecting Friday afternoon at the City Ground. Things get off to a rocky start when Czech striker Matej Vydra puts Derby in front. But this only serves to enrage the formidable Henri Lansbury, who starts putting the ball into the net from all different kind of angles. He is an inspiration to Osborn, who does the same to make it 5-1. We ride out the game in disbelief, not giving Derby many opportunities to come back from this blow. This has been the best performance by my side since I started my job here.

There are only two full days between the first and second match of the semi-finals of the promotion playoffs. Even at the end, the Championship likes to get a move on. With this in mind, I have given the players a full day of rest to recuperate and replaced some tired legs early in the first leg. This means the squad is relatively fit for the second leg. The only change I make is replacing Pinillos with Fox, because the Spaniard is still recovering from his earlier injury.

Everybody who has seen FC Barcelona and Paris Saint-Germain this season during their Champions League clash will know what was racing through my mind when I saw Derby slotting away the goals. Especially James Wilson was simply unstoppable and made my heartbeat rise every time he got the ball and not in a good way. Every time they scored, I looked to reduce the risks taken. I wanted to go more defensive than contain and find more buses than there are available in the general East Midlands area. But at the end of the day, we held on. We suffered a total collapse in form, but we held the line. We’re going to Wembley!

Elsewhere, QPR managed to beat Norwich City and also secured a ticket for the final. Since the final is a one legged affair, I’m in a bit of a dilemma. Do I select the more risk taking option that allowed us to put five past Derby or should I choose a more risk free option in the hopes of stifling QPR’s attacking intent? What to do, what to do… I see the days passing by without me making a decision. But then I think of a compromise. I give both Walker and Pinillos more conservative duties (support) and hope my control mentality will give Walker enough attacking intent to contribute effectively to play in the final third.

As finals usually are, this too was a disappointment for the neutral fan. Both sides were hampered by nerves and scared to death of conceding. As the minutes passed towards full time, I realized we are piss poor at taking penalty kicks. Remember the EFL Cup game against Huddersfield Town? It was a showing of incompetence. But then the 90th minute arrives. Walker receives a throw in by Pinillos and turns to run towards goal. But he is upended by Perch. It is Kasami who steps up confidently. The Swiss crosses the ball towards the center. Smithies reaches for it, but is unable to get the ball far away. It falls to the feet of Lansbury. The micro seconds it takes for the midfielder to put the ball in the net feel like an eternity. Wembley explodes. David and I hug each other and won’t let go for the remaining four minutes. It is the most touching love affair on the sideline since McClaren and his umbrella. But after what again feels like an eternity, the final whistle blows. It’s all over! We scream, run, jump, and act like uncontrolled idiots around the pitch. The red part of the stands is in full party mode. We are going up! WE ARE GOING UP!