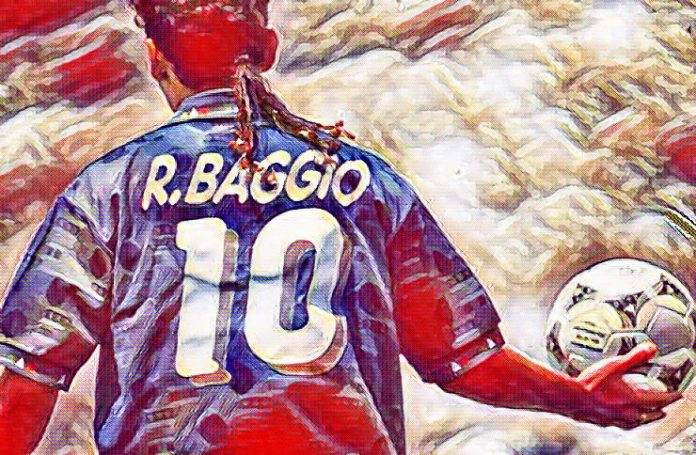 Pure Number 10 players are the kind of species that we, football fans, love to admire. The number 10 position it is indissolubly linked with skills, vision, and creativity. They are the players people buy ticket for, the ones that can turn a match around. Kempes, Totti, Baggio, Zidane, Bergkamp…you don’t need to be their age to know they were great, because they remain in our collective memory somehow.

I could go on for a while praising these kind of special players, but I wanted to get on board on the reasons why I have chosen to make some statistical analysis on the three playmaking roles available in FM17. Advanced Playmaker, Trequartista, and Enganche, they are all facets of the same kind of player, the one pulling the strings and directing his teammates as an orchestra maestro.

As said, FM17 give us three different possibilities to play a pure number 10 in the AM strata. This is what Football Manager has to say about them:

The fact that the game itself is naming one the three roles to describe the other tells us that they are quite similar with only small differences. By looking a little deeper, into the key attributes and the coded Player’s Instructions, we can get a better idea of the main differences of the roles. In fact, the only shared PI is “more risky passes”.

The Enganche differs significantly because he is told to “dribble less” and to “close down much less”, thus creating a player that tend to hold his position and does not participate much in the defensive phase. While at attack, he will look to breach the defense through his vision rather than dribbling skills. As the name suggests, he acts like a hook between midfield and attack. While the AP is told the opposite, “to dribble more”, and hence will often try to make penetrating runs with the ball. The Trequartista instead, besides sharing the AP’s instructions, is given much more mobility thanks to “move into channels” and “roam from position”. He will then tend to extend his zone of action, looking for any free space in the final third from where he can either create or take chances.

Nevertheless, in order to have a proper and complete vision of how roles influence a player behaviour on the pitch, I have decided to analyse them closely with the help of the statistical data that is now available on FM17.

I played the same 10 games three different times each, every time with same player only changing his role. I never set PI other than the ones coded by the game. I opted to use the Belgian National Team because of how quick you can go through matches by holidaying and for the absence of tactical familiarity in international management. The player chosen is Kevin De Bruyne, a fantastic playmaker that has the ability and skills to interpret perfectly the three roles.

THE NUMBERS AND WHAT THEY TELL US 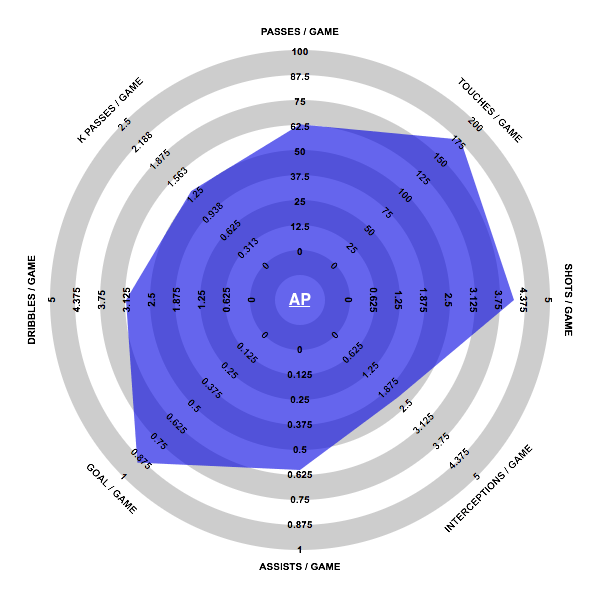 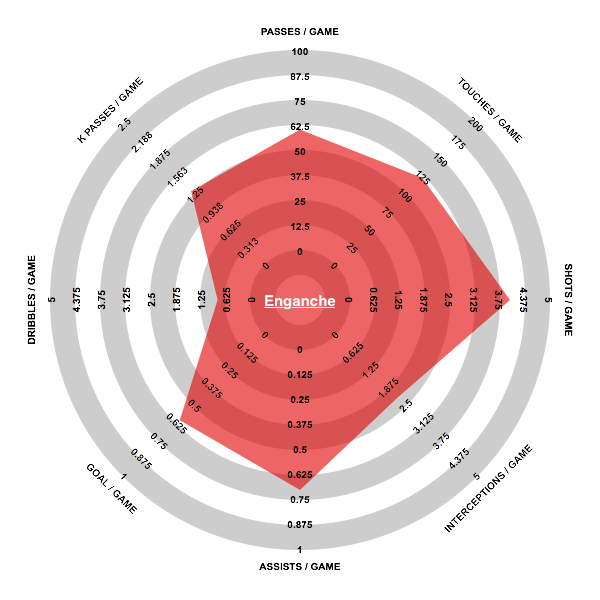 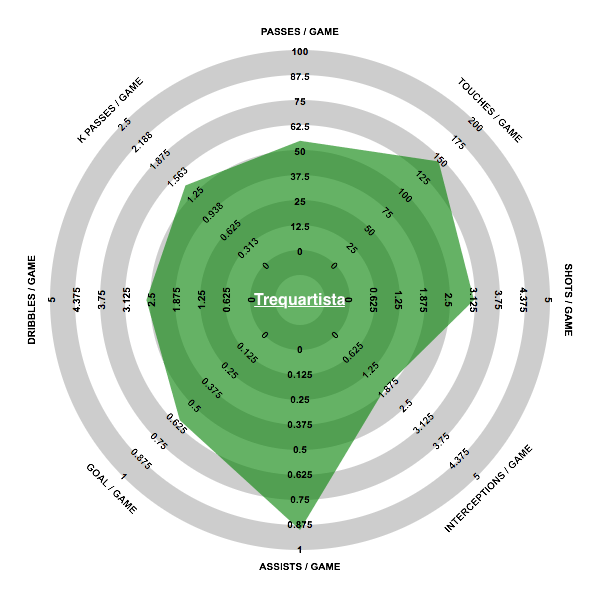 The first thing that I’ve noticed looking at the statistics’ graphics is how big but similar impact all three roles has had into the games. In terms of assists, goals, and key passes all three roles have very similar numbers:

Through the stats though, we can also learn more about their styles. Take dribbles-per-game for example, we range from the 0.81 of the Enganche to the 3.1 of the AP. The huge difference however can be best appreciated by looking at the number of passes and, better yet, the number of touches per game:

So what do these numbers tell us? Simply that an AP uses around 50 touches more to achieve a similar number of passes and to have a similar impact in terms of goals and assists than an Enganche. In fact, in my testing run, De Bruyne was responsible for 13% of the whole Belgium Team’s passes. A big percentage if you think he played alongside the likes of Hazard, Mertens, Lukaku, Dembélé, and Naingolan, all players that are more than friendly with the ball. More concisely the Advanced Playmaker will need to monopolise the ball to create danger in the opposition defence.

If we translate the numbers into tactical terms, it will mean that you may want to choose the role for your number 10 according to the football philosophy or style that you want to apply, rather than only looking at attributes. If you want to control the game and choke your opposition through possession, then an Advanced Playmaker is the role that best suits you. If you rather want to play a more direct and quick kind of football, without sacrificing your number 10 player, then an Enganche can be really effective despite his lack of defensive instinct. Because he will stay up the pitch and look at killers through balls cutting the enemy lines. If you want a more mobile player and someone who can be a danger within the box, than the Trequartista is what you are looking for.

Finally, I was also surprise to see that in defensive terms, the difference is not as much as one could be led to think. Yes, definitely, the AP role will track back and press much more, but even if you dare to use a Trequartista or an Enganche, you can easily counter-balance your team by choosing some more aggressive roles behind them.

On a final note, I think it is interesting to see how numbers can help us shed some lights on roles and players and help us make more informed tactical decisions and FM17 provides quite a good platform for analysis.

If you want to continue the discussion, I invite you all to comment the article. And while you are there, check my profile and hit me on Twitter to keep in touch and see what else I’ve been up to recently!