Welcome back to the series with more parts than a dodgy plumber. Episode 9 is upon us and whilst we didn’t get very far in the Champions League, we’re just 1 point off the top in a very open title race. Can the Brits abroad be triumphant? Or will it be heroic failure yet again? Let’s find out.

Here’s a reminder of the table before we travel to Estrela Amadora.

So, a tricky away match awaits us.

We were really struggling until big Deano came on – a goal and an assist later, we’re three points richer. Lovely Brian.

You’ll have to excuse me for a moment, I have a semi 😉

Bleugh. Their ‘keeper gets man of the match and we’ll have a replay at Chaves. I’m so sick of playing them, it’s always a close Chave. Sorry.

Hold on a second.

Back to league action now and with Sporting Lisbon losing at home the previous day, a tasty looking home game should send us top.

Time to replay that semi final. Guess who put us in the final?

To think I’d pretty much written him off. It’s a final against Porto next month. Glenn Hoddle has been watching.

It’s not quite Deano but I’m pleased for Gallen, he’s carried the goalscoring burden at times.

Off to Belenenses and it’s a disappointing result.

The invisible man equalises for them, he’s a one named man who I think has had his name typed in wrong…

A forename instead of a surname? Who knows.

The England game arrives but it’s a mixed bag for my lads.

Back for some home comforts now and 8th place Salgueiros are the visitors.

It’s a nervy one – dare I say a tired one – but we get the win, and that’s all that matters. It means we’re all level with Sporting Lisbon at the top but their goal difference is considerably better than ours.

Time for the always irritating trip to Braga.

Irritating indeed. Sinclair climbs off the bench as a half time sub to get us a point but it’s all points dropped at the minute. 6 games to go.

At home to bottom club Viseu should be an easy 3 points.

Like everything we do, it’s a massive struggle but we dominated the game and only a string of saves from their keeper, who got man of the match, keeps it respectable.

Another difficult away trip, this time to Maritimo, but at this stage every game is a chore.

Phew. Surely Bridges will be next to get his cap? Sporting win, so there’s still 2 points between us but we are due to meet in what could prove to be a pivotal clash in a few weeks.

Gallen’s on the fringes again.

He’s just a spectator again though.

First start for TT, and first cap for RR. Is there a word for people who have the same initial for forename and surname? Jody Morris getting his second cap too, I’m like a proud dad.

After the International break, it’s a big day for us. The Portugese Cup final. Sometimes. These things write themselves…

The England boys come up with the goods, Curtis gets man of the match to boot. TROPHY!

As a reward for winning a cup final on Friday night, we host Boavista on the Sunday. Those who aren’t hungover get to play.

Boavista are 5th so in the circumstances, this is a very good result. That leaves the table looking like this with Sporting our next trip.

Sporting actually travel to Porto and then finish at home to Guimaraes so maybe a draw wouldn’t be the worst result, but to keep it in our hands we have to go for the win!

YESSSSSSSSSSSS! The Brits show up when it matters. A top 2 place is guaranteed but now we just need to seal the title.

Get in! 3 years of graft and we’ve done it. Champions of Portugal.

Hoddle celebrates by calling up most of the team for Euro 2000.

As a reward, I’ll be resting them all for the last game against Rio Ave.

Big Dion makes a late claim for the squad and Abbey comes on to save a pen. A nice way to finish!

You get £340k for winning the Portugese league, FYI. But still, we’ve won the double, which is worth more than £340k. Probably.

First England goal for TT and a first cap for Nathan Abbey.

Kevin Gallen made the bench, twice, but no cap. It’s coming!

To be fair the whole squad is a thing of beauty…and Scott Minto.

They see off Georgia.

Draw with the Danes.

Anyway, Scott Minto has been capped!

Nathan Abbey is going to win player of the tournament at this rate.

England go through by a goal (top 3 all on 5 points) and the Danes are out. It’s Italy in the quarters. 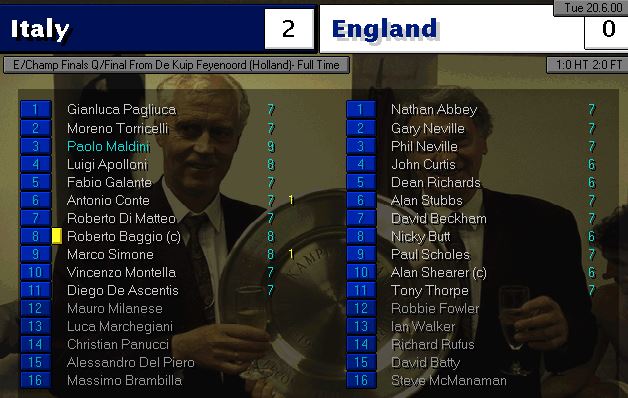 And that ends that.

Italy go on to lose the final to Germany on penalties. What a shock.

Time for some awards, Mr Manager of the year over here.

The English equivalent has some interesting winners.

But that is your lot, the end of season 3 is here. But I need to decide…what now?