4-4-2 has become a relatively obsolete formation in recent years, as teams attempt to infiltrate the half spaces and overload defences. However, as Atletico Madrid and Leicester have proven in recent seasons, there is still a place for the old faithful in football.

Defensively, it is one of the most rigid formations available, with two banks of four that can nullify opposition attacks, while a strong strike partnership can maintain a team’s attacking threat. 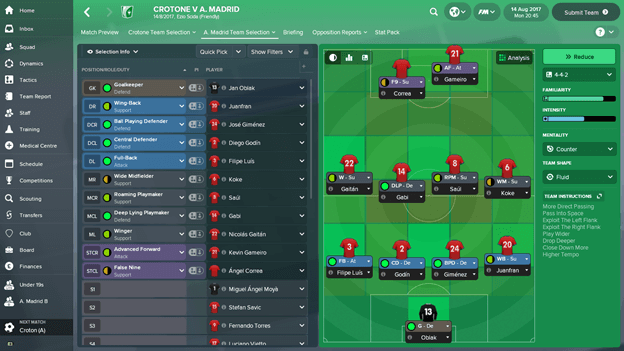 Using Atletico as an example, this screen demonstrates the strengths and weaknesses of the formation. There is a space between the midfield and the defence to exploit, but in this instance, the use of Gabi (or Kanté at Leicester) sitting deeper can dissuade direct opposition attacks. 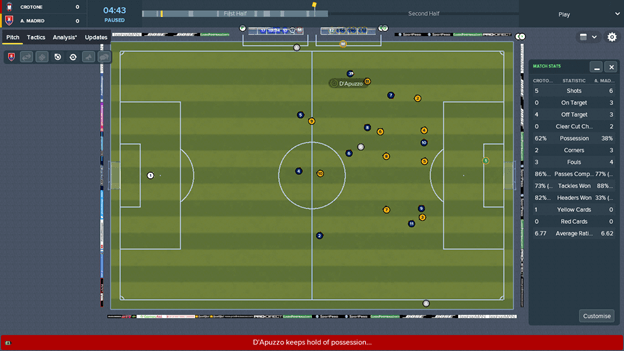 Speaking of long balls, against a 4 man defence, every attack leaves no defender free. In this example, Juanfran plays a simple through ball towards Griezmann. Because the other defenders are occupied with other attackers, and the midfield has been bypassed by a single pass, a chance can immediately be created. 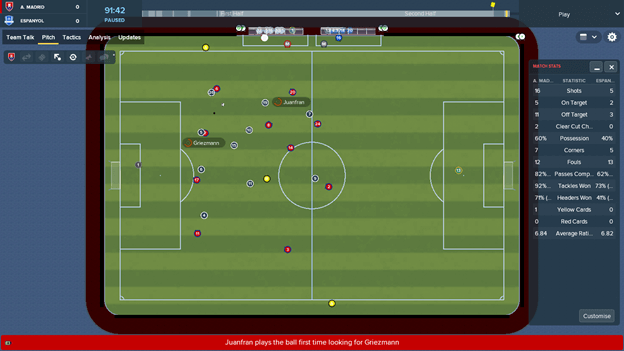 This works well with the deeper defensive line as well. As the opposition pushes up to exploit the space, the gap opens up behind. A quick striker in the partnership (i.e. Griezmann, Vardy) can burst into this space.

Alternatively, the gap can open up in front of the defence, between them and the midfield. If this happens, one of the strike pair can peel away into this space (False Nine, Trequartista, Deep Lying Forward), and can launch a 4 on 4 attack from there. 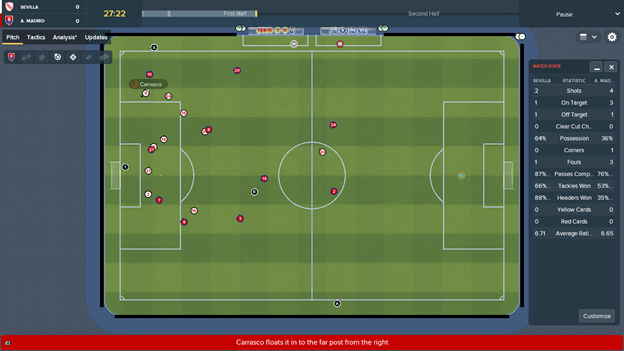 This screen shows the overloads that 4-4-2 can create. The triangles created by the formation means that as the ball reaches either winger, they can use the neighbouring striker, centre midfielder or full-back.

This can drag the opposition midfield over, creating the overlap on the far side. Using one full-back with an attack duty allows this overlap, so a cross into the far post (such as the example above) can catch a defence unaware. Even if they clear the ball, the oncoming full-back can keep the attack alive. 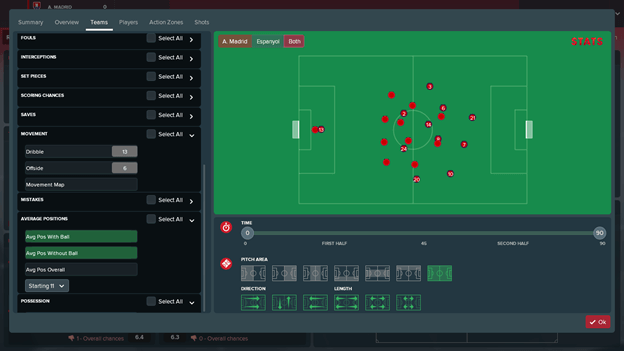 This screen shows one of the many analytical tools in FM18. It shows the team’s defensive and attacking shape in their most recent match.

The filled circles denote the positions without the ball. This shows the two banks of four that prevent oncoming attacks. But the attacking positions (numbered) show the attacking full-back overloading that left side as the winger (Koke) comes inside to impact the play.

Similarly to Leicester, as Albrighton would come inside for a cross allowing Fuchs to go beyond him, this Atletico setup does require marauding full-backs for total attacking domination.

This means that 4-4-2 can be so effective against weaker opposition, using overlapping full backs and a direct style. But in the modern game, it is most important as a defensive system, getting eight men behind to frustrate a stronger team. Hence some of the most unexpected title winners in modern times.