Welcome back to ‘Southampton’s Black Box’: a story focused on the organized success of the club known for their over-achievement. As the title implies, the save will be highlighting and representing the recruitment strategy by Southampton. I will be compiling a large database of players in the game to assist me in my FM17 successes, as well as your own. Enjoy!

Welcome to Part 10! When we last left off, Southampton were flying high: fourth place in the 2017/18 Premier League. What is in the cards for the second half of the season, not only in the league but also in the cup competitions? Firstly, though, what type of business did we do in the January transfer window?

Not too much movement out of Southampton in January, with only about €1.2 million of the total €25m, garnered from sales in the window accrued throughout the month. Fringe players Jérémy Pied (€600k to Cardiff) and Florin Gardos (€500k to Burnley) were sold for small fees, but I’m glad to see space open up in the squad for youth players. Unneeded goalkeeper Paulo Gazzaniga was sent on loan to Cagliari for the rest of the year with a mandatory future fee of €1.19m to be paid this summer to make the move permanent.

The only important loan move of note this January is that of Matthew Keen, one of our most promising strikers. In only half a season of League 1 football at the age of 17, Keen scored a phenomenal 12 goals in only 13 starts! I must say that he and Blazej Bator – another 17-year-old forward we bought for €1m last summer – look like real talents for the future. 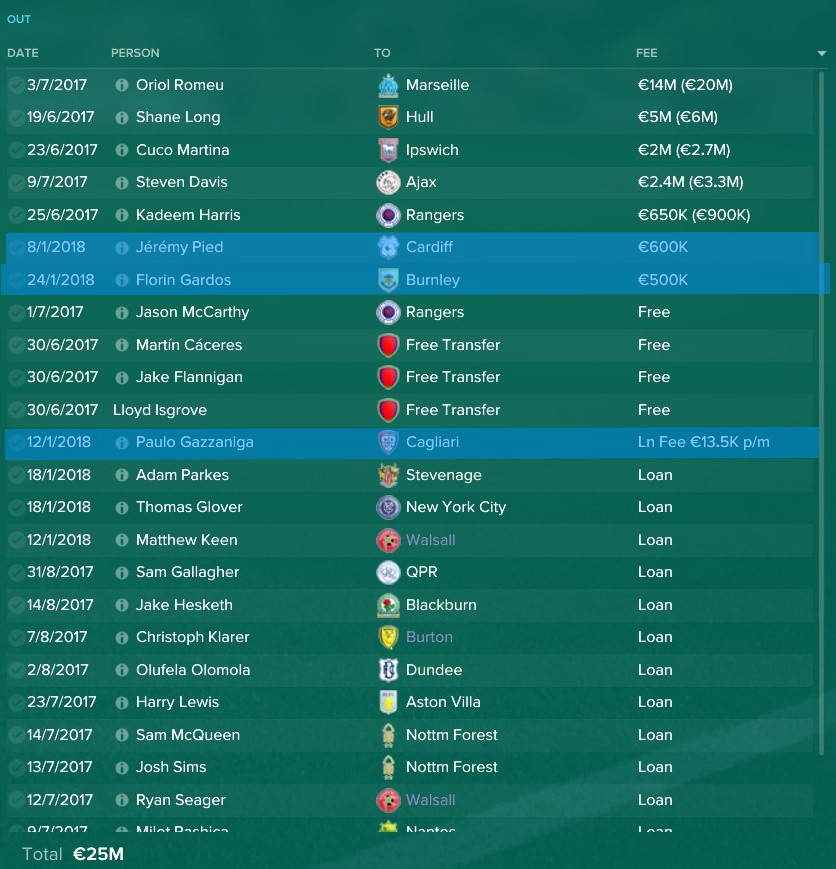 I mentioned in the last article that we were looking at potentially signing Nampalys Mendy from Leicester City – a 25-year-old ball-winning midfielder. That transfer was successful: an €8.5m fee is quite the coup, though I must say that I was wary to accept his demands of €67k per week. Nevertheless, the transfer went through because I felt we really needed a like-for-like replacement for Oriol Romeu.

Another notable purchase was Kim Källström from Djugårdens IF in Sweden. The 35-year-old joined on a free as a possible backup player, but mostly for experience in the locker room and as a tutor. I am a true believer that including some experienced heads in your FM squad really benefits the youngsters; I’ve tried to do that a lot this series by purchasing Emir Spahic and Gareth McCauley, while also keeping Steven Taylor at the club. Finally, we purchased Adam Williams, a 17-year-old BWM from Blackburn for a potential €1.3m fee. 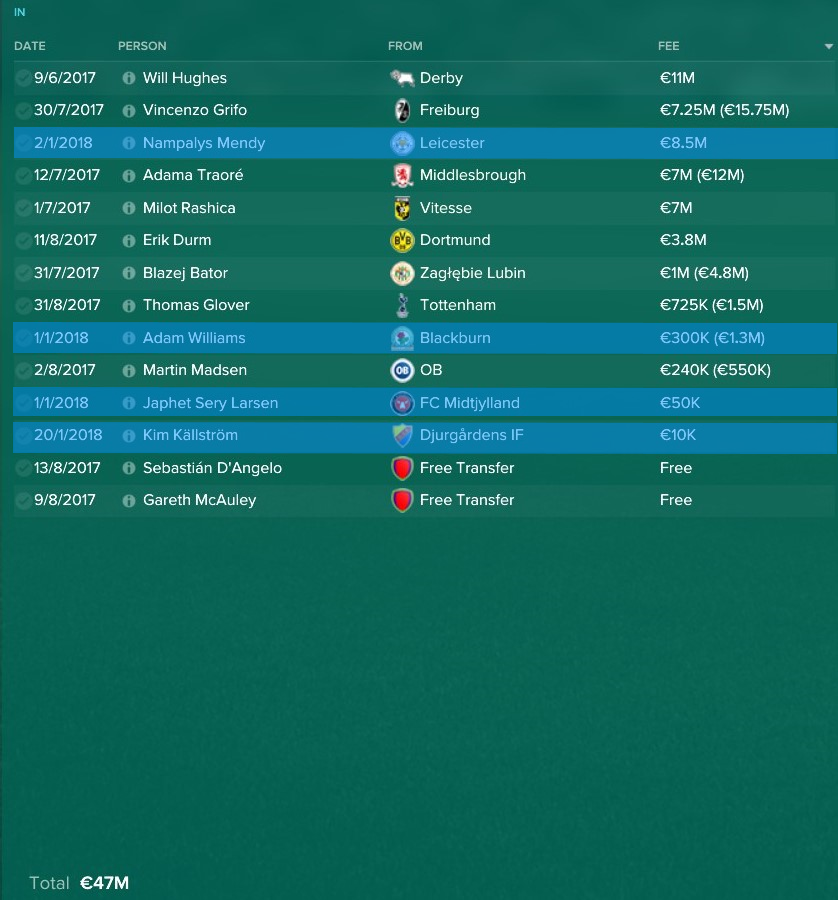 As they say on the Men in Blazers podcast, “To the football!” I’m sure you’re interested in finding out how we’ve done in the Premier League after our fantastic first half of the season. Now with Mendy and Källström to add depth to our already strong team, let’s see if we kept up our form past December. 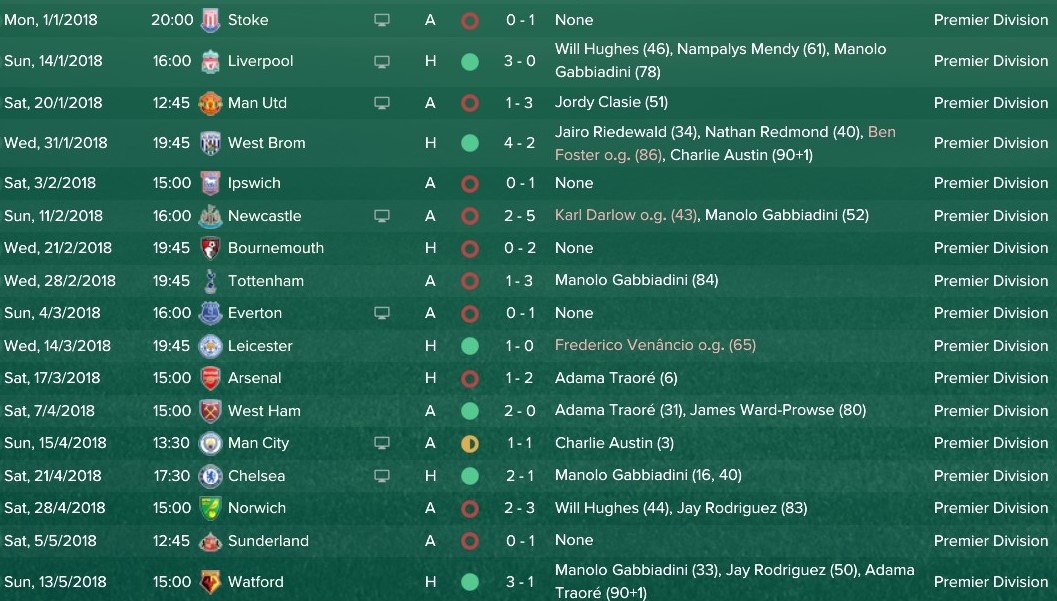 As you can see, we did not. A month-long losing streak early in the half of the season really slashed our confidence, especially the horrid 2-5 home loss to Newcastle. However, we did manage a draw against Man City and a win over Chelsea later in the season, but losses of all three points against Norwich and Sunderland meant we couldn’t qualify for any European competition.

Seventh place – not bad. It’s an improvement upon our eighth-place finish in our debut season, which is a positive. I’m still disappointed that we let our superb position fall away from us, but was there a silver lining in our league blunder?

We’d made it to the EFL Cup semis last time you checked in, with a two-legged tie against Stoke upcoming. The away leg was tough, but Southampton managed to grind out a 1-0 victory at the bet365. The return to St. Mary’s was more of a cakewalk: the emphatic 3-1 scoreline meant we went through to the final by a total of 4-1 on aggregate. We’d meet West Ham at the pinnacle of England’s second-most important cup competition.

Before we began the match, I realized that a victory would not only mean my first silverware as a manager but also qualification for the Europa League! With our chances looking quite bleak at that moment of holding our spot near the top of the table, I put everything I could into this match.

Winston Reid scored an unfortunate own goal early on in the match, and we continued to dominate for the rest of the match. Sofiane Boufal scored a screamer to notch our second – enough to get us over the line. Our first piece of silverware at Southampton and I couldn’t be happier! Not only did we prove our worth against some of the country’s toughest teams to beat, but we also qualified for Europe. 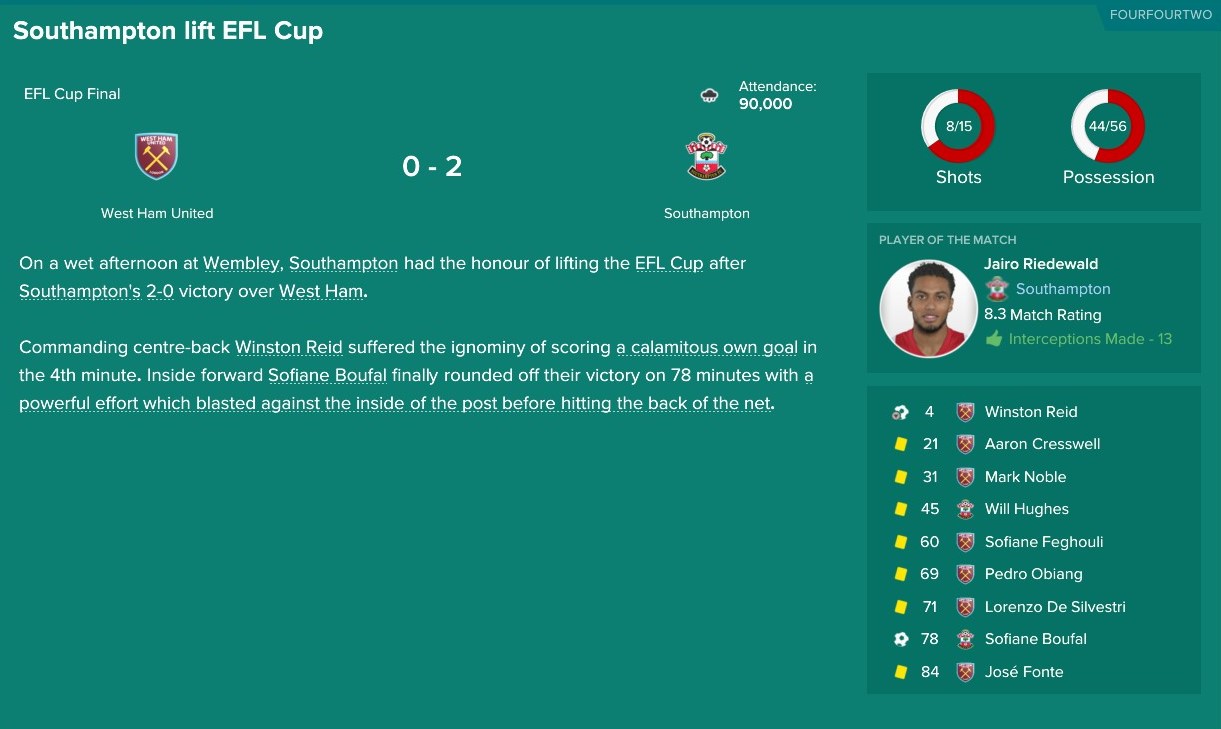 The EFL Cup was beautiful. The FA Cup? Not so much. An away draw against Swansea in the Third Round (our debut round) meant a replay at home. In a back-and-forth match in which the Championship side took us all the way to penalties, we couldn’t hold our nerves and bowed out. The board was frustrated, but I’m at least happy that we were able to focus our efforts towards the EFL Cup instead.

Our youth intake wasn’t the most successful I’ve ever seen, but it certainly produced a few gems. Here are the best of the bunch:

Jamie Worgan: Versatile midfielder Jamie Worgan looks to have the base attributes of a quality Southampton player. A great eye for a pass, first touch, and well-rounded base attributes certainly lend themselves to a very good player in the future.

This series has a core value that lies at the technical heart of Southampton Football Club. As of recent, I’ll admit that I’ve partially ignored that heart of innovation and preparedness in these updates, so here are a few updated lists of some shortlists I have.

Let me know whom you think I should target in the summer transfer window. As always, that feedback is appreciated either in the comments section or on my Twitter, @adiek22. For now, thanks for reading and best of luck to you Football Managers!