Ladies and gentlemen, let me introduce you to greatness. Let me show you the Messiah, the liberator of Okhtyrka football: Yuriy Chonka.

There’s magic behind those beautiful blues, less than a month at the club and he’s already a fan favourite. He’s charmed his way to the Vice Captaincy and if I’m completely honest with myself,  I think I love him.

Ahem, sorry where were we?

We’re up against Girnyk-Sport Komsomolsk, who are just below us in 9th place. They’re also unbeaten in their first three games, but a closer look at their fixtures reveals they have only scored once. Three clean sheets means we’ll have to work hard to get a goal but with Chonka in the side, anything’s possible.

I stick with my trusty formation, I am however, forced to make a few changes: Olexandr Panchenko replaces Boyaryntsev in the heart of defence and – because Semenyuk is flagging – I switch Vovkodav to left back and ask Vadym Malyuk to fill in at right back. He seems more than happy to do so – what a good egg. The bookies have Girnyk Sport as favourites but despite this, my assistant – in a brilliant display of awareness declares that we are favourites and we should tell the players that. Bless him, at least he’s keen. 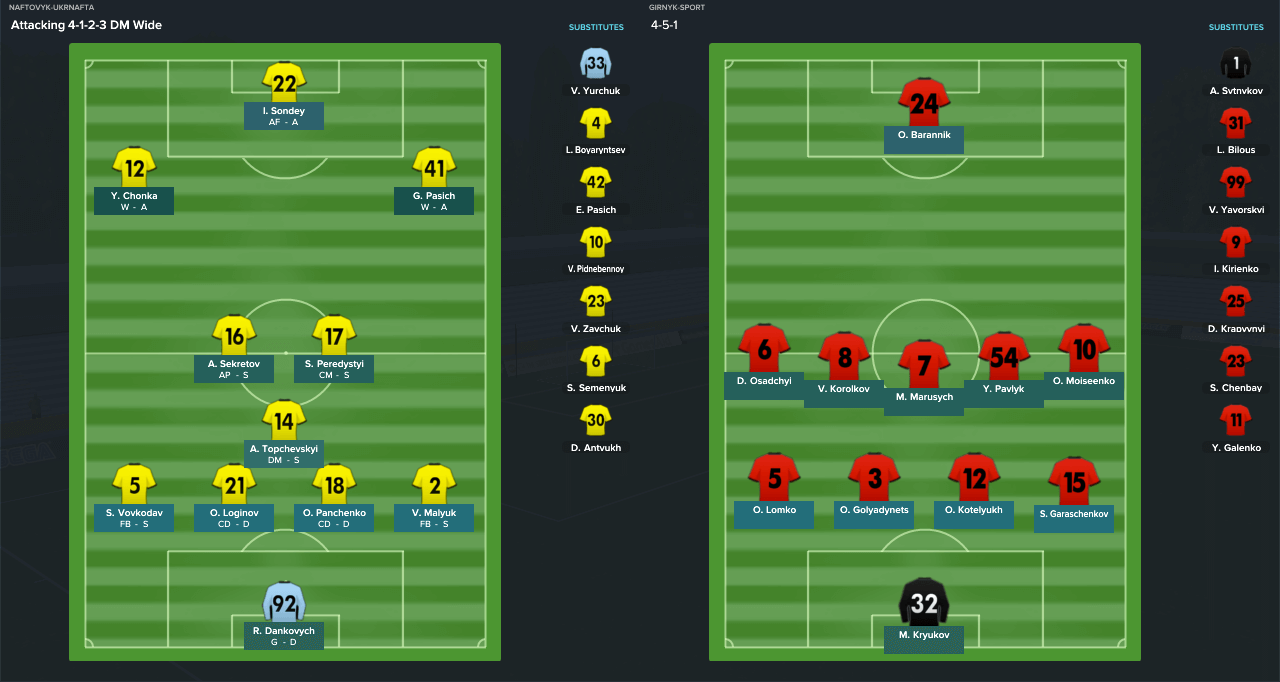 Well, it wasn’t the best of performances, but we got their in the end. We actually started really well and after just 7 minutes Pasich’s deep cross is volleyed in by The Main Man Yuriy Chonka. It’s wasn’t quite a Thronka, more of a Thronkette. Still, they all count.

We continue to press which, in hindsight, was probably a mistake because a long ball from Girnyk Sport split our rather makeshift defence and Barannik rifled in the equaliser. Literally one minute later and my head is in my hands; Panchenko, who is making his debut, chops the troublesome Barannik down in the area and the ref gives a penalty.

I’m seething, we’d been on top for the opening exchanges and then this little cretin ruins it all, we’ll struggle to get back into th…NO! Wait, it’s saved! All hail errr *looks at the team sheet* Roman Dankovych, yeah…hail!

The team must have been spurred on by Roman’s heroics as we launch attack after attack. Eventually, we make the break through – and you have to say it’s been coming. If you were to put money on who was involved, you’d do a lot worse than to whack the house, car and your least favourite child on Yuriy Chonka. His wicked cross into the 6 yard box is attacked by Pasich who frightens the defender enough to force him to whollop it into his own net. 2-1.

I’m taking no chances in the second half, I switch to a more defensive approach and it works, almost nothing happens for 45 minutes.

In one of the rare second half highlights, I notice something… 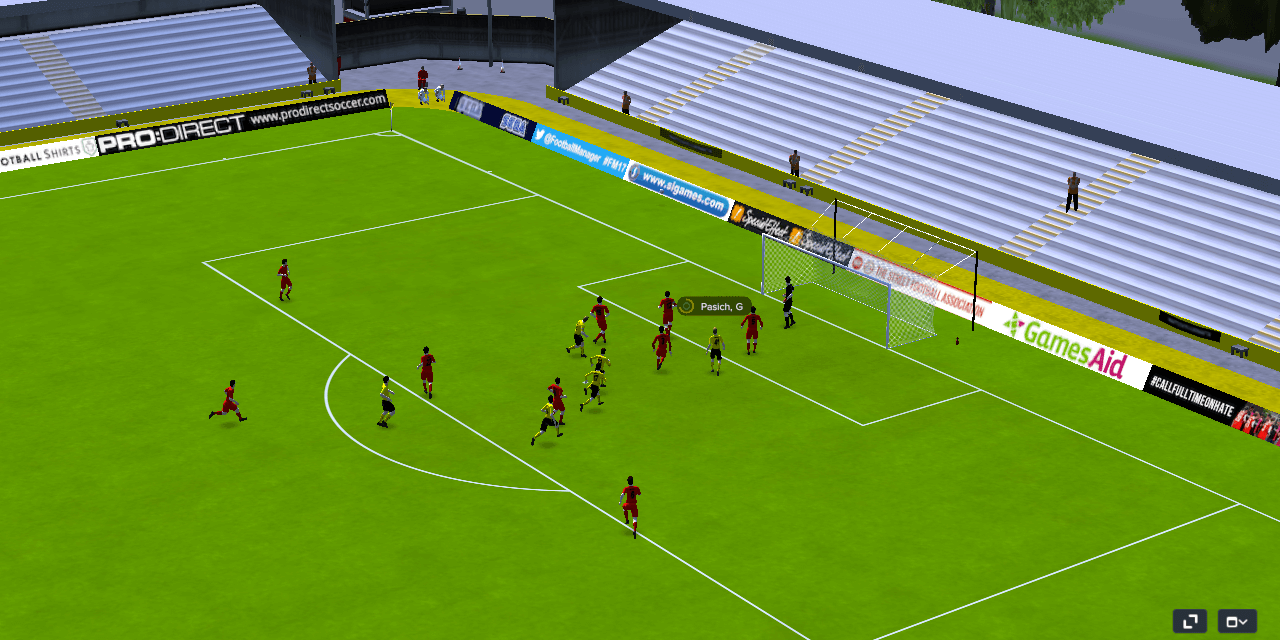 Why in the name of Yuriy Chonka are we paying stewards to supervise an empty bloody stadium?! 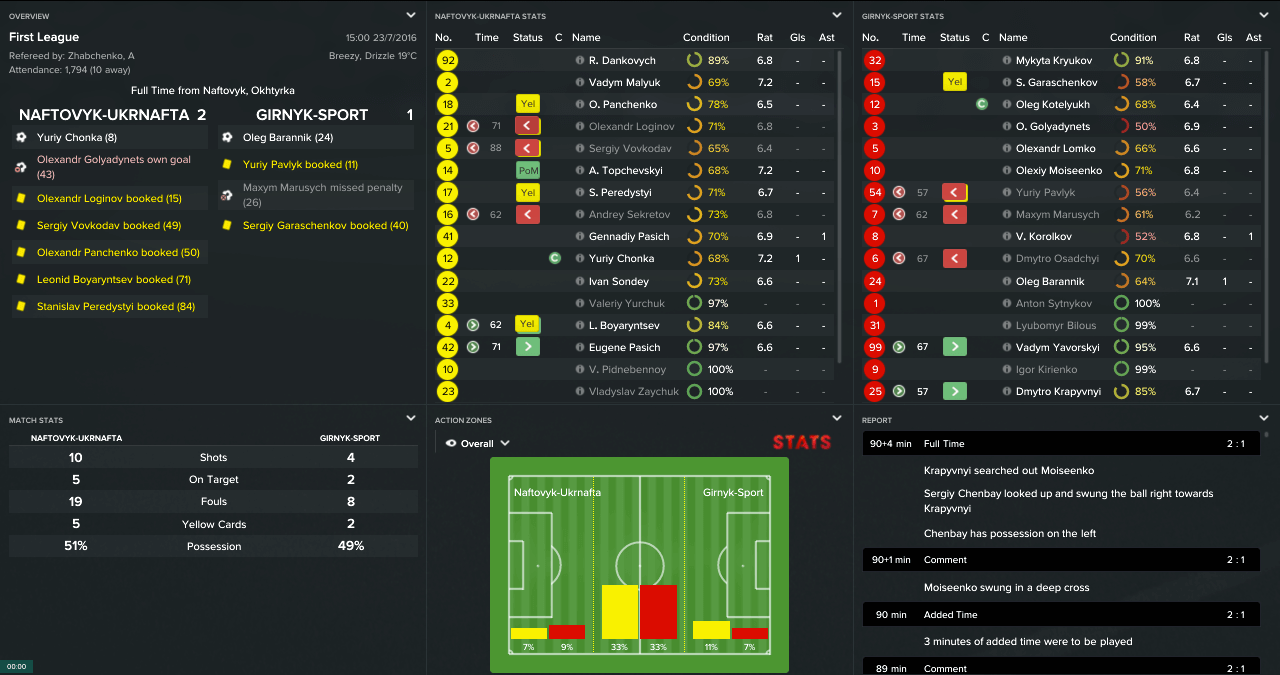 Next, we face top of the table Obolon-Brewer Kyiv, they’ve won three of their four opening games, conceding just two in the process, so this is a big test for us. We’re only a point behind them and we’re still unbeaten, which they are not. They’ve favoured a 4-2-3-1 formation so far and we’ll have to be cautious of their front man Vasyl Prodan, the little scamp has scored four in four – we’ll need a plan to deal with him. My assistant recommends a bloke that he knows who can ‘deal with problems’, I pretend not to hear.

The formation remains unchanged, although defensive calamity Panchenko drops to the bench for the refreshed Boyaryntsev and Semenyuk comes back in, meaning Malyuk goes back into midfield and Vovkodav is back at right back. This could be Ivan Sondey’s last chance to impress me up front, so far he’s done the square root of bugger all and I’ve just confirmed the loan signing of Dmytro Shastal who is sat on the bench, waiting… 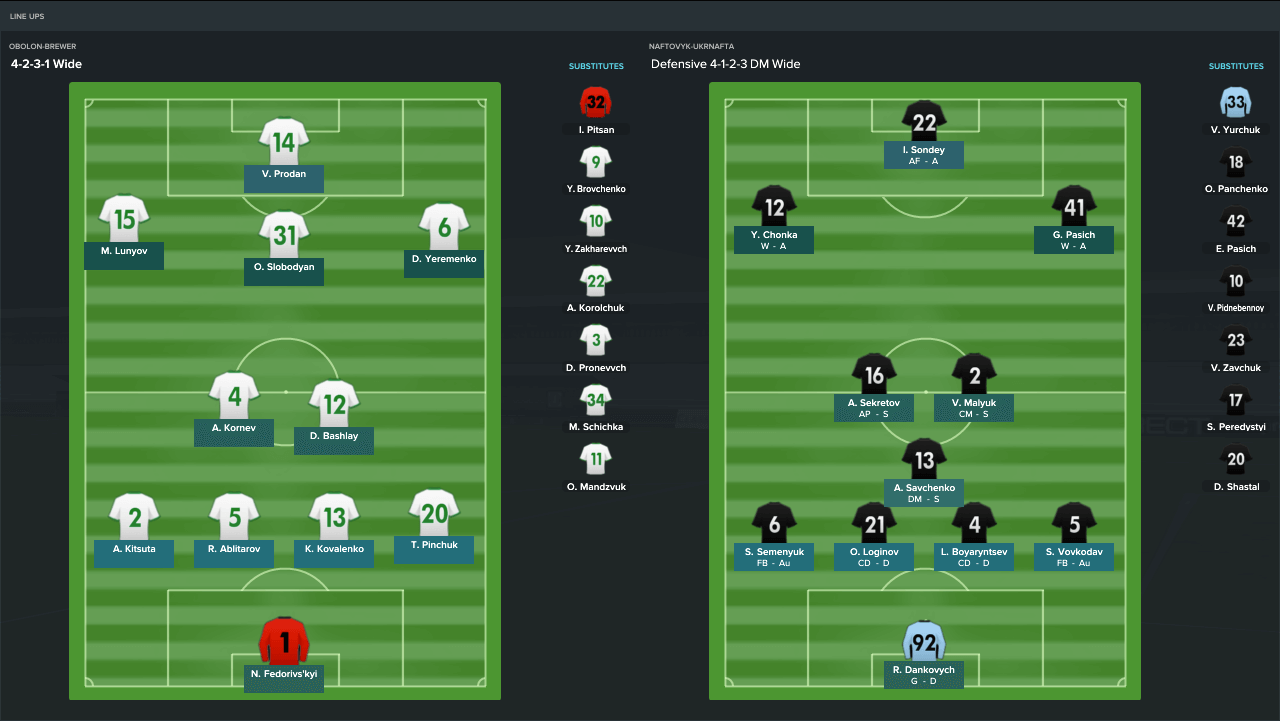 Christ alive, that wasn’t enjoyable. They start with furious intent and we’re only able to hold on for 5 minutes before an astonishingly piece of bad luck puts us behind. A thunderous strike from the edge of the box smashes into the face of Sergiy Vovkodav and flies into the net, putting the home side in front and  leaving Vovkodav seeing stars and only able to think of one syllable words for the next 20 minutes.

The first half ticks by and just as I’m thinking of second half changes, that bloody lovely man, Yuriy Chonka whips a majestic cross from the right wing for Boyaryntsev to slam home from close range.  The second half is backs to the wall stuff, we defend in numbers and ride our luck a hell of a lot. Brewer hit the bar, but my plucky boys hold firm and gain another point. 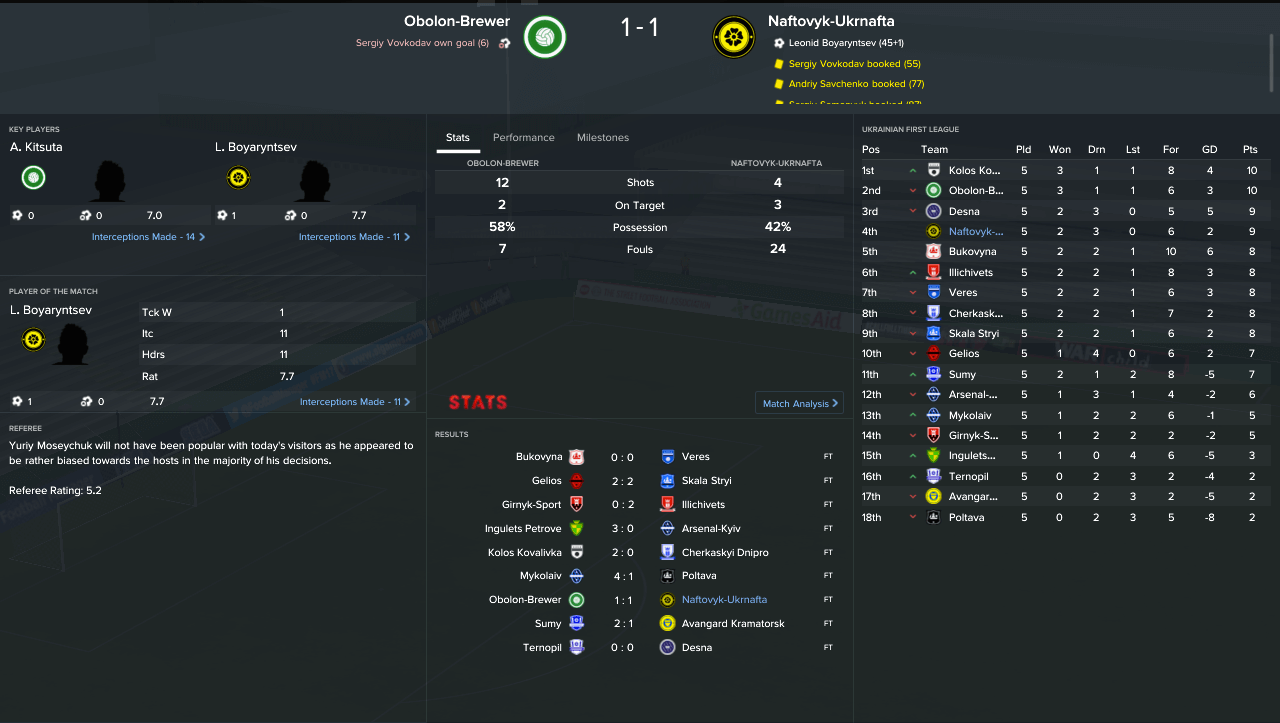 For our last game of the month, we take on Gellios Kharkiv. They are distinctly average and have drawn four of their opening five games so naturally they’re bound to stuff us.

I am trying to be optimistic; we’re at home and with Chonka in your team, anything can happen. There’s only two changes to the side for this game: Vovkadav has picked up four yellow cards, which is pretty impressive in 5 games, so he’s suspended and I’ve finally got fed up with Sondey leading the line. I’ve seen more incisive potatoes during my stay in the Ukraine, youngster Shastal replaces him and plays as a poacher.

Imagine everything that could go wrong in a game. That’s what just happened. That’s the nightmare I just witnessed.

For the first 41 minutes we’re on top, we spurn a couple of chances but we look comfortable. In the 42nd minute they score. For some reason we decided to leave their right winger in enough space to swing the biggest sack of cats you’ve ever imagined and his well-measured cross is tucked home by their centre back, who we also decided to give a wide berth.

Just before the break it gets worse. My assistant, who’s keeping a close eye on our players, reluctantly tells me that Yuriy Chonka looks to have picked up and injury.

“It’s alright though, he should be able to be nursed back to health.”

I’m taking no chances, Chonka is taken off at half time and wrapped back in his cotton wool protective suit. Vyacheslav Pidnebennoy replaces him.

Literally seconds after the kick off, Loginov gives away a penalty and they’re two up. I suppose I should be encouraged that my defence were actually getting close to the opposition now. Two goals and no Chonka, I knew this game was over. Not even a goal from younster Shastal can spark a come back. It’s bitter way to end the month. 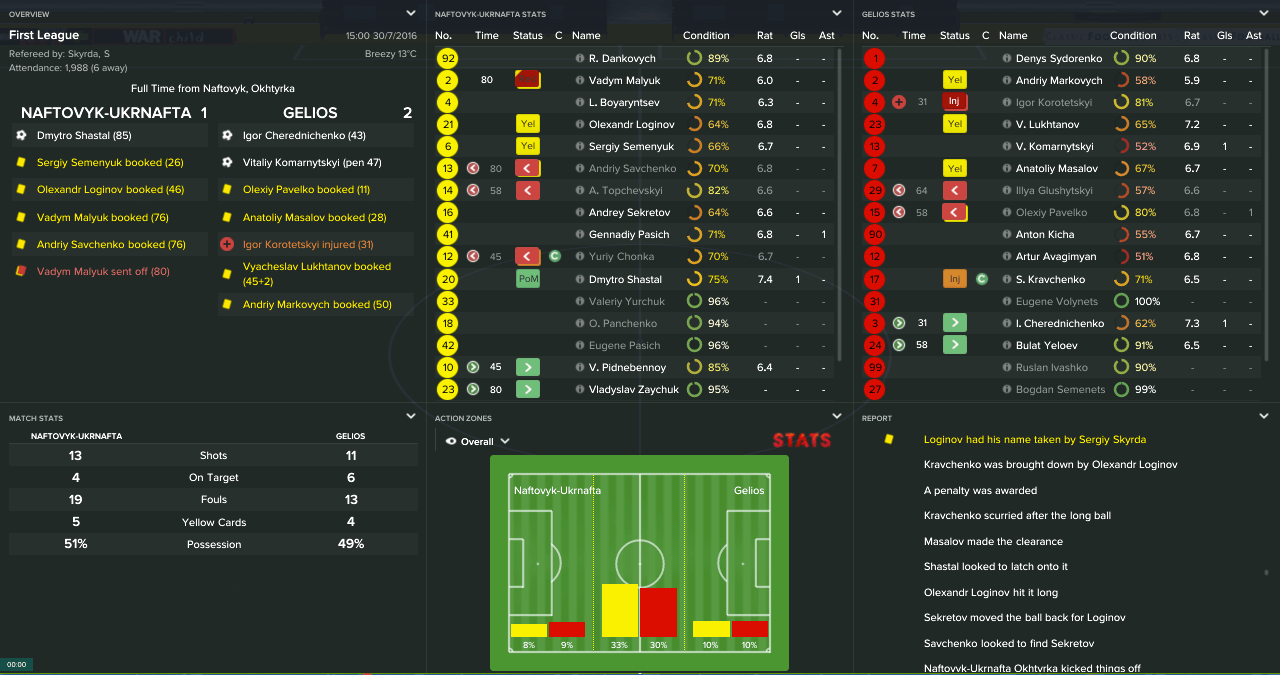 Still, we’ve lost just once in our first six so it could probably be worse.

‘Nursed back to health’ – my assistant is walking on bloody thin ice.

Like what you read? You can follow me on Twitter. Even if you didn’t, why not follow anyway? You can always just hurl some abuse. You can also read the same piece again on my site The Mazy Drivel – it’ll have more content one day.