I wake up on the first full day of Hapoel Ashkelon FC’s training camp in Berlin (why Berlin? What would have been wrong with training amongst the vineyards of the Judean Hills?) in the knowledge that I’ve decided two of the formations I want to train: an asymmetric diamond, loosely based on Sir Alf’s world cup winning team, and a 5-3-2 employing a sweeper.

I’ll get Rozental to lead the morning session. Weiss can do some much-needed fitness training and Rozental can do whatever Rozental decides to do: some gentle ball skills, I guess. But I’ll need to know my third formation by the time we settle down to a doubtless unappetising salad (do Germans do salad?) at lunchtime, because someone’s bound to ask, ‘So, gaffer. How are we setting up this year)’.

A bagel for breakfast, which I eat outside. As I relax in the morning sun (‘No, it’s OK, Ronen, I won’t join the fitness session, but thanks for asking’), I come to acceptance that the 3rd formation has been staring me in the face all the time. It’s obvious what it should be: it’s just that I don’t like it.

4-2-3-1 (where 3 = attacking midfield). We’ve got all these attacking midfielders, some of whom we’re paying handsomely. Might as well use them. It’s just that I don’t feel comfortable using it. It worked beautifully for me at Episkopi in the parallel universe of FM14, where I permed the 3 from Gonzalez, Ponce, Delaportas, and the unfortunately named D’Acunto. But never since.

I’m not temperamentally suited to being reliant on flair and skill, especially if it’s other peoples. It’s all so flouncy. I’d rather have Styles and Ball any day. Even at Episkopi we had Delibasis trudging round in midfield kicking people.

Stelios, if you read that, it wasn’t meant as an insult. Well, the ‘trudging’ bit was, but not the ‘kicking’.

My dislike of 4-2-3-1 is exacerbated by a deficiency in FM. Where do you put the 2? If you play them in a central mid, there’s gap for opponents to get into between midfield and defence. If you play them as defensive midfielders, they’re a long way from the attacking midfielders. You can stagger them – one DM and one CM – but if you play them both centrally the opposition will just by-pass them. I guess I could try moving one a little to the right and the other to the left.

This problem only arises with FM. I regularly see teams 4-2-3-1 ITRW – most recently, I think, Forest after Psycho had departed, taken his rigid 4-4-2 with him). Mancienne and whoever partnered him just played half way between defence and the attacking midfielders. Why can’t you do that on FM? 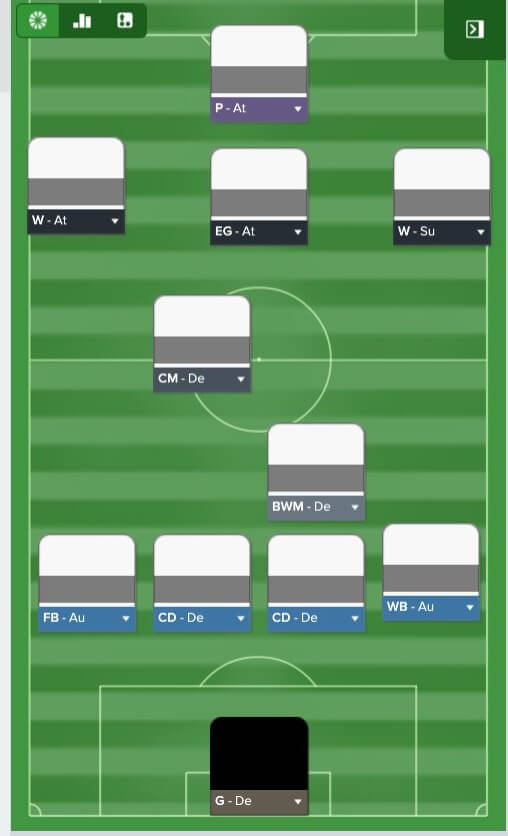