When Antonio Conte became manager of Juventus in the summer of 2011, he realised that the formation that would get the most out of the available players was 3-5-2. At the time, he was working with the classic Juventus back three, Andrea Pirlo and Claudio Marchisio in midfield, and Alessandro Matri up top.

He favours a back three (as we have since seen at Italy and Chelsea), and found that a packed midfield and strike partnership would serve his side well. In the three years of his reign, Juventus won the league every season, and Conte saw players like Carlos Tevez, Paul Pogba and Fernando Llorente fit seamlessly into this 3-5-2 system.

Juventus favour a 3-4-3 nowadays, but Conte’s 3-5-2 worked wonders, and this guide should show how this league winning formation can win trophies in FM18. 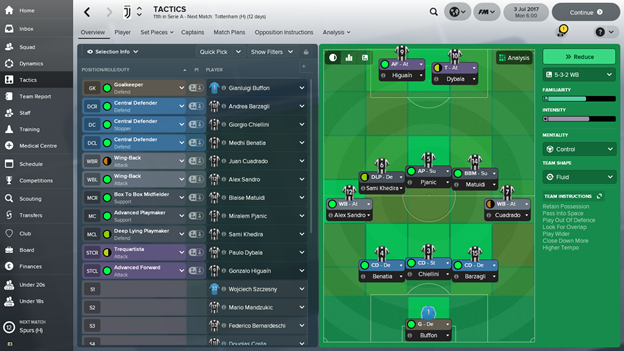 This is how the 3-5-2 worked at Juventus. Unlike the 3-4-3, those three centre midfielders provide much more cover for the centre backs. In this instance, Khedira can drop deeper while Juventus have possession. 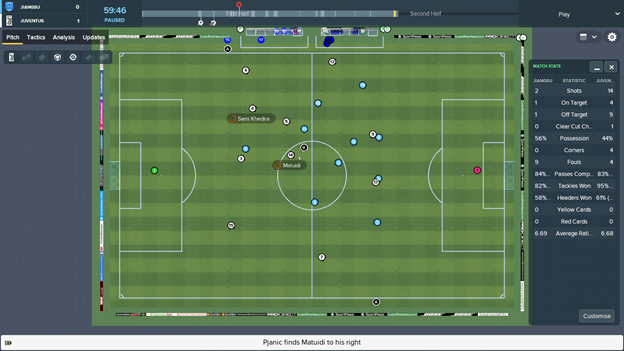 Khedira is sat between the LCB and CB, creating a temporary back four, while the pressure is off and the team is keeping possession (more commonly occurring while using the “Control” mentality). This gives the left wing-back freedom to charge down the opposition wing, which is vital due to the comparative narrowness of 3-5-2. 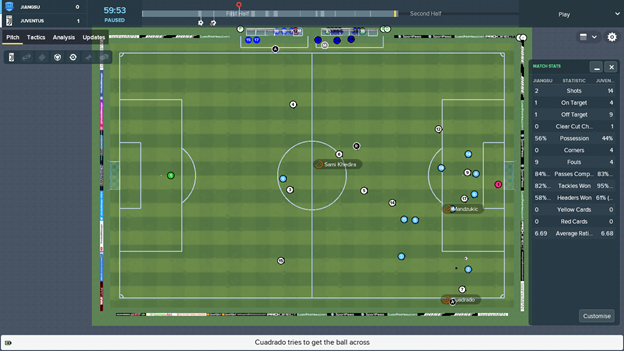 There are seven seconds between the above images. As Khedira (or any deep-lying playmaker) sat deeper on the left side, and Alex Sandro moved forwards, the play remained on that left side. But as the ball was moved to Cuadrado on the right wing, he had space to get down his line and whip in a cross.

3-5-2 facilitates this by having two players ready in the box at all times. What makes this so powerful is that this movement was started by Khedira sitting deep and Alex Sandro pushing on. If the ball out to the right wing-back falls short, four defenders are back to deal with it. However, if the ball gets through, as it does in this case, Alex Sandro is already steaming into the box to overload it. 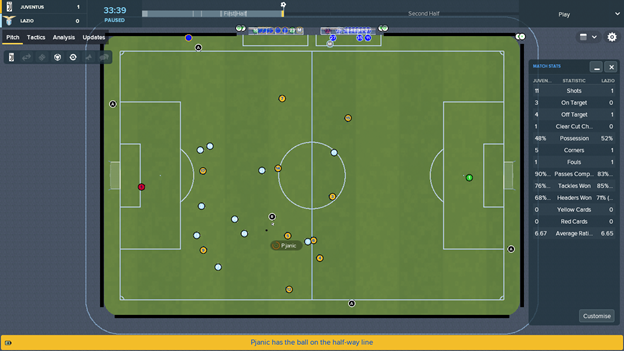 Here’s another example of the speed of 3-5-2, in particular the use of wing-backs. Higuain Is receiving the ball from Pjanic here, and remains in this exact spot for the remainder of the attack. Upon controlling the pass, his fellow striker, and wing-backs, immediately move into attack mode. 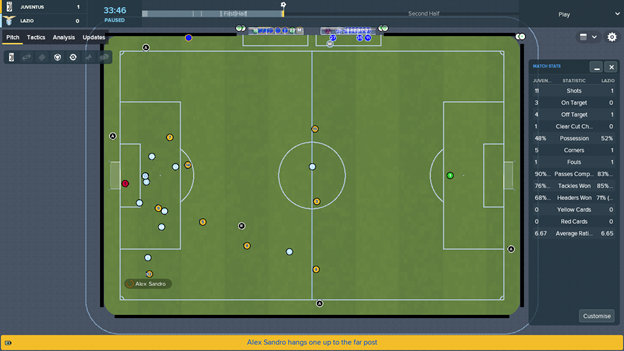 Seven seconds. From nothing to 1-0. Higuain is still on the edge of the box, but now both wing-backs are within the final third, and Mandzukic is ready for the cross. The transition from possession to attack is deadly.

Worth using with big strikers who can hold the ball up and can head a ball well. The midfield need to be able to keep possession, and it’s worth utilising a defender with a bit of pace and the “Cover” duty, in case the opposition striker turns out to be Jamie Vardy.

Two strikers mean that one is almost always available for a pass. The wing-backs won’t make their move until the ball reaches the final third, keeping the defence secure. The formation is relatively risk-free defensively, the midfield is dominating with three players, and two strikers give a huge boost to the attack.