Home Football Manager 17 FM Stories The Land Down Under VI

G’day, mate! I have a quick question for you Central Coast Mariners supporters. How many of you loyal fans threw five dollars at the team at the start of the season not expecting your bookie to be providing a return? With 1000-1 odds, there’s a bit of money to be made if we are successful, and as I said in the last post there was a realistic chance that our strong run could take the team from last to the top of the table.

We’re wrapping up the regular season in this update, so if you want to check out the other posts before continuing, feel free to do so.

We’ve had a strong run so far, as you’re all aware. It started negatively, with a run of seven matches with only two points on the table before our change in tactics. From the last match of November clear into February, we were on an unbeaten run and racking up three points at a time with the odd draw. That loss couldn’t hurt our morale or tempo, so we went right back to winning and now we’re sitting second in the league and about to take on the defending champions for the top place in the regular season. 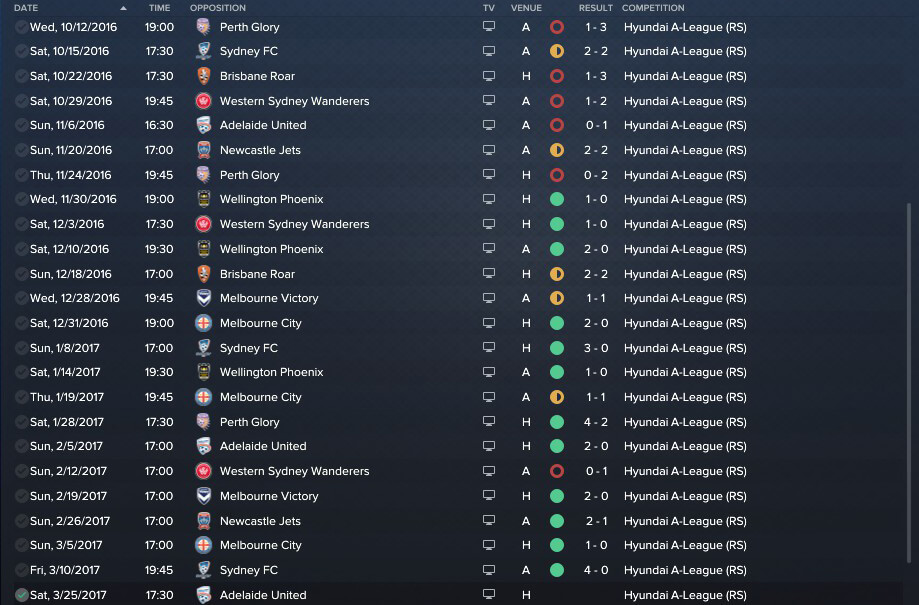 We only have a couple of matches left after this, so we need to keep the lads focused on the prize through the Adelaide match and the remaining three fixtures. This is our last meet-up with them for the season, so if we can’t overtake them outright in a win and they win their matches, we’re settling for second. 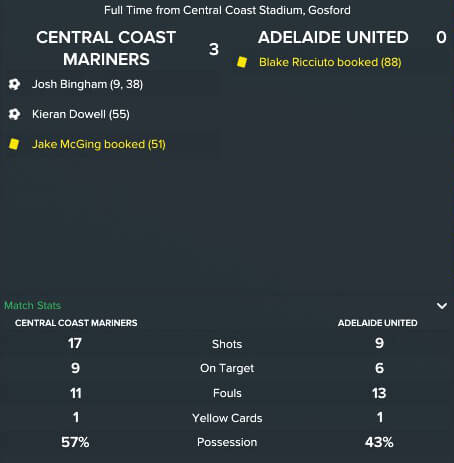 Josh Bingham, back from injury, and Keiran Dowell gave us three goals and all three points against Adelaide at our home ground. We were the better team, but Adelaide did their best not to fall over. At least 5 of their shots looked very dangerous and I thought with certainty that we’d concede at least a couple of goals. But, we didn’t!

With this victory, we’re top of the table, overtaking Adelaide United with three matches to go. It’s a fairy tale, really. I’ve had my share of successful runs with teams before. I have taken teams who were expected to be relegated to the top before in Europe, but this is the first time I’ve successfully turned around a mid-season last place position to take the top of the table.

Here’s our climb in the league, starting from match one and our last place streak. It took us three matches to climb up the table to eight, then it was a gradual climb towards the top. The white line is Adelaide United’s who, as I previously said, are defending the title this year and have been top of the table all season. 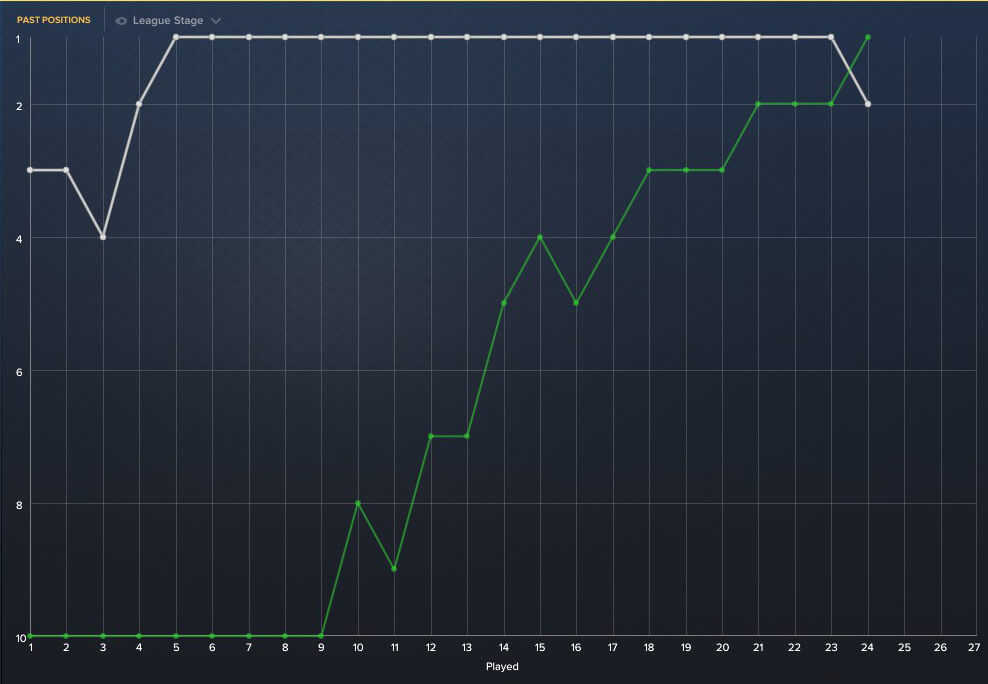 We may be on top of the table now, but there’s no time to be complacent. With three matches left to play, we can just as easily lose what we’ve worked so hard for if we don’t keep our heads focused.

Our next meet-up was the final home match of the year against Newcastle. This one ended in a draw, but Adelaide lost their match following a rough Champions League match, so we pulled up to four points ahead of them with one to go.

The Melbourne Victory match was a dead rubber, so it’s fair to say that everyone’s heads weren’t entirely in the game for us. Even I will admit to letting my focus drift more towards thinking of the champagne bottles popping once the curtain closed on the regular season.

Under normal circumstances, I would have complained about a loss, but the Victory have challenged us in the past before as stiff opposition, so I broke from the Hartman routine to be sympathetic and say they were unlucky. I can’t tell them off for not being focused if I was complacent enough to watch the USA-Venezuela friendly on my television now, can I?

With our team as good as it is with our current lineup and tactic, we’re easily the best team in the league for performance. Any team that’s in the top six and the Finals Series has a chance at the big win, but I’d favour us since we managed to climb so smoothly and convincingly up the table and defeat these other top teams. Anyone who can climb from last to first deserves a fair shot, I’d think.

That concludes this post and the regular season as a whole. In the next post, we’ll go over the structure of the A-League Finals Series and how the league table determines the draws, we’ll cover our own run and see if we can make it to the end, and we’ll cover the notable end of season awards and try to figure out what my plans for the preseason are going to be.