The squad is named for the upcoming fixture, Herolind Shala and Fanol Perdedaj will be big losses due to injury.

Two days before the fixture we get the news that full-back Benjamin Kololli has suffered damaged cruciate ligaments – 7months out! Stuttgart’s Samir Bahrami is called up as a replacement.

Georgia tend to favour a 4-4-2. We decide to line up in a 4-1-2-1-2 (diamond), the idea is that we will have enough numbers in the middle to prevent them building attacks and can hopefully break at pace on the counter.

It’s a breezy 16°C in Tbilisi with the stadium filled to its 25,453 capacity. The line-up is named. This is it. A chance for glory that must be grasped with both hands. 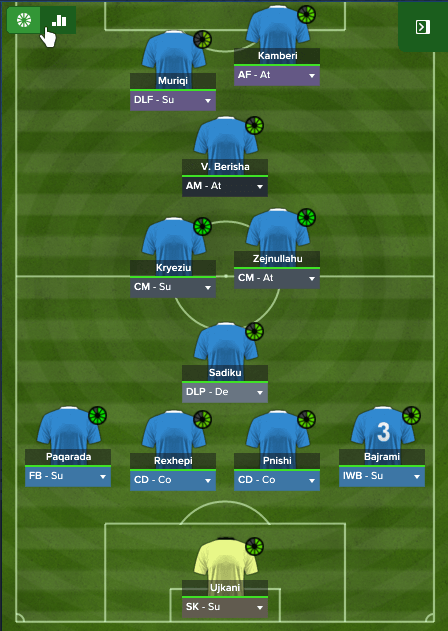 The pre-match analysis suggests this will be a close encounter, they’re anticipating penalties. Georgia get the game underway playing from right to left.

In the 2nd minute, Georgia build up an attack from side to side, full-back Kashia is on the edge of the box and rattles his shot against the post. Paqarada scrambles the loose ball clear.

Just a minute later and Georgia have a corner. A long ball to the far edge of the box is nodded back towards the near post. Qazaishvilli heads down into the ground but it goes narrowly wide.

It’s all Georgia as they have another corner on 24 minutes. It’s headed goalwards but the ball hits Bajrami on the 6-yard line and is hoofed clear.

Kosovo win a freekick near the byline on the right side of the box on 32 minutes. Valon Berisha takes it quickly looking for Muriqi at the near post, Muriqi’s header is well saved. Muriqi gathers the loose ball and knocks it back to Kryeziu whose shot is well blocked, it falls to him for a second opportunity and the ball is blocked again but only into the path of Eroll Zejnullahu…GOAL! Kosovo take the lead through a fine volley. 1-0 to the away side. 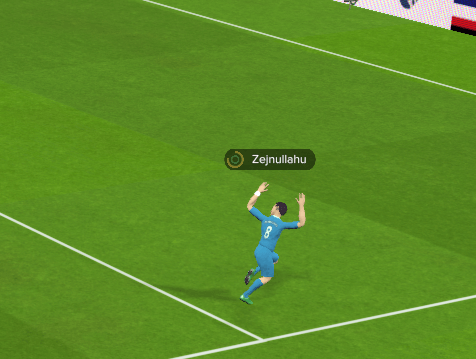 In the 39th minute, Georgia lead an attack down the right wing but are unable to find anyone from the cross. Kosovo gather the ball and break quickly. Kryeziu plays it wide to Paqarada who makes it to the touchline and crosses for Kamberi who heads agonisingly wide.

Kosovo win another free kick on 44 minutes this time it’s 40 yards from goal. Berisha again goes for the quick option and plays in Bajrami on the right-hand side of the box. Bajrami crosses to Kamberi at the near post who strikes home…GOAL! Kosovo double their lead. 2-0.

At the half time break, it is Kosovo in control on the scoreline, largely thanks to Berisha’s quick thinking from freekicks. 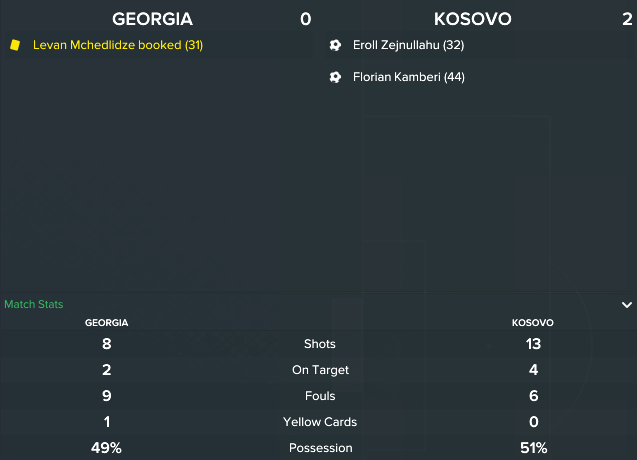 Straight from kick off Kosovo attack and Berisha receives the ball in the box but his shot is straight at the keeper.

On 48 minutes Kosovo’s front three lead an attack with Georgia’s defence stretched. The ball goes wide to Kamberi whose cross is a poor one but finds the late comer Zejnullahu with his back to goal. Zejnullahu swivels and passes to Muriqi who has the simple task of sidefooting home unmarked…GOAL! Kosovo make it 3-0. 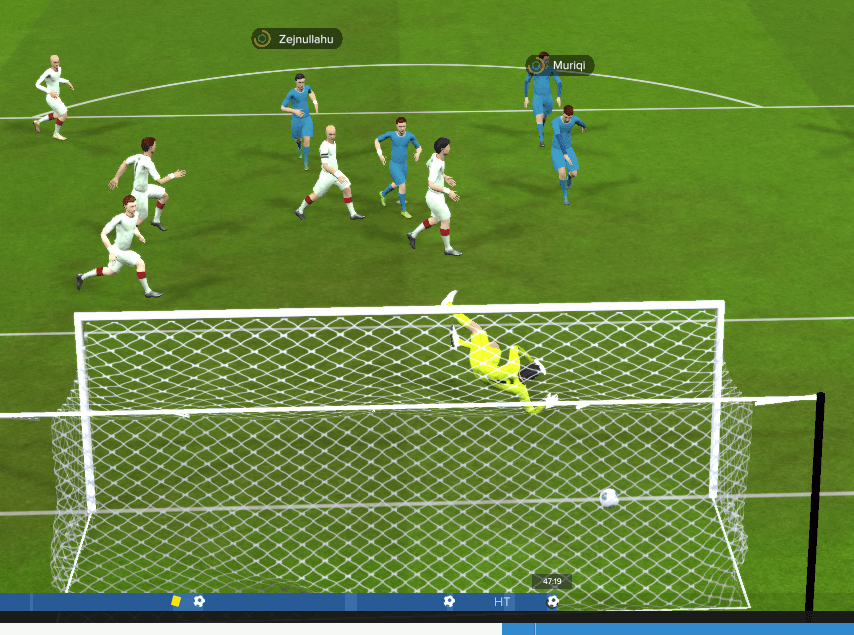 On the hour mark, Valon Berisha is replaced by Zymer Bytyqi in an attempt to keep things fresh and give Bytyqi a chance to impress again.

On 76 minutes Prishtina youngster Tahir Adjradini comes on for Eroll Zejnullahu to make his debut.

79 minutes gone and Muriqi gives the ball away in the Georgia half. Okriashvili advances to the halfway line and plays a delightful ball over the top of the Kosovo defence. Substitute Vatsadze races onto the ball on the corner of the box and lashes home an incredible shot…GOAL! Georgia give themselves a glimmer of hope with 10 minutes to go. Georgia 1-3 Kosovo.

On 87 minutes Georgia continued to push forward. The ball finds its way out to Targamadze on the right wing who plays a deep cross to the back post. Vatsadze peels away from his marker to hit it goalwards…GOAL! Vatsadze scores his second of the game to set up a nervy finish. Georgia 2-3 Kosovo.

There are two minutes of added time announced. Georgia’s goal kick is hit straight at Zymer Bytyqi who plays it to Kamberi. Kamberi shoots from the edge of the box and the ball hits the post and bounces clear.

Georgia take the ball up the opposite end from that attack and the ball reaches Targamadze with 91:36 on the clock. Targamadze picks his spot…GOAL! What a disaster for Kosovo to concede an equaliser with the final kick of normal time. 3-3 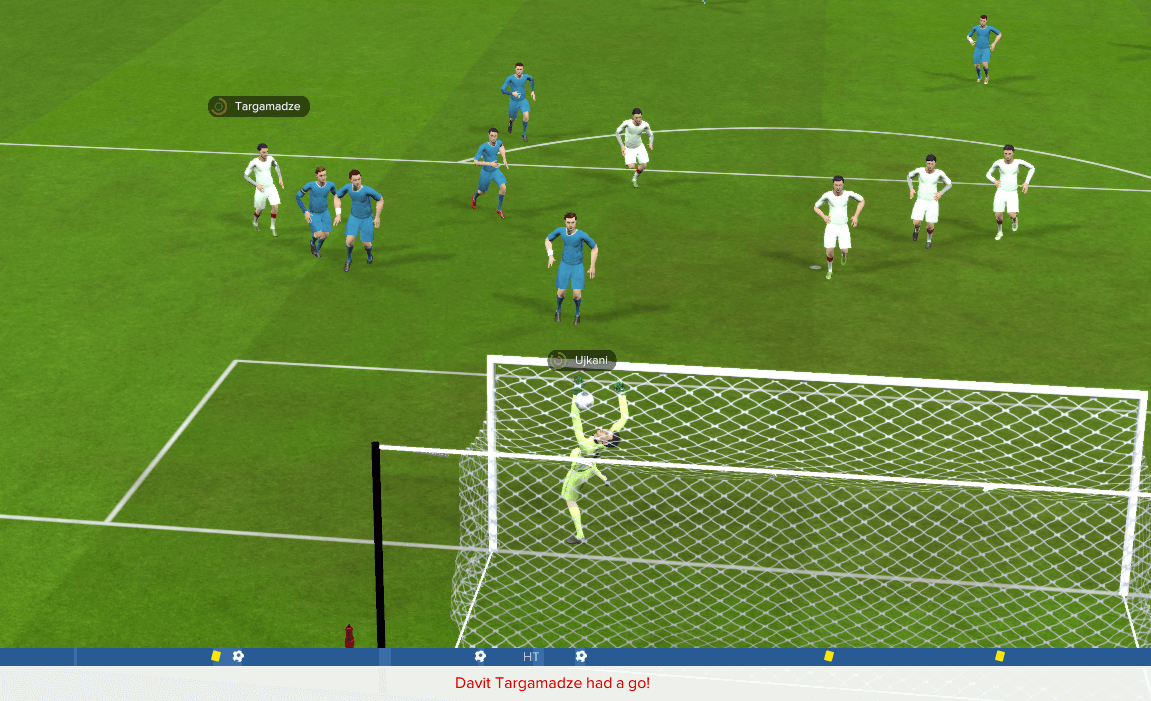 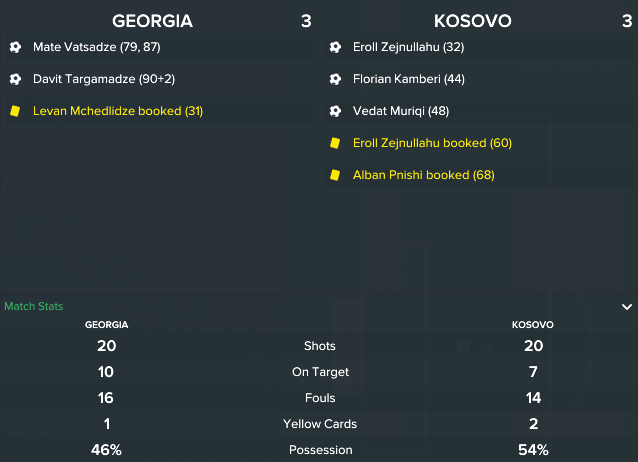 On 93 minutes Bytyqi gives the ball away in the middle, Targamadze receives the ball wide right, he cuts inside and shoots but it’s well held by Samir Ujkani.

Kosovo break immediately and Ajradini crosses from the right to Kamberi who smashes his shot against the post.

On 97 minutes Ilir Azemi comes on for Vedat Muriqi to try and give the game fresh legs.

Half time in extra time and the scores remain level at 3-3. 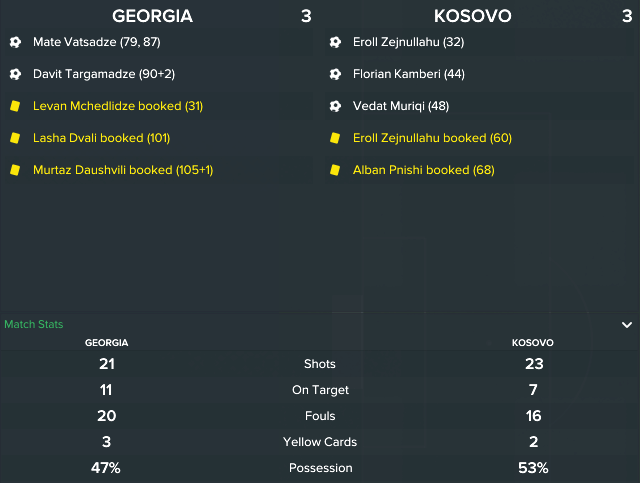 On 110 minutes Georgia launch a ball from wide into the box looking for Mchedlidze who heads narrowly wide.

A minute later Azemi’s poor pass is intercepted and Georgia break through the middle, Qazaishvili’s shot is well saved by Ujkani.

The sides can’t be separated in 120 minutes so the game will go to penalties! 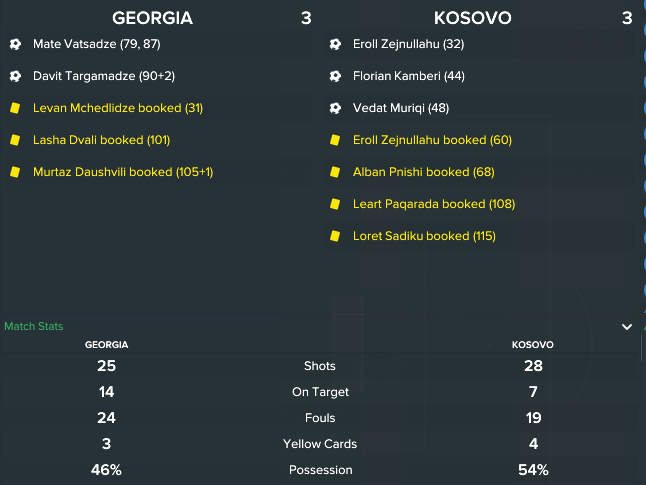 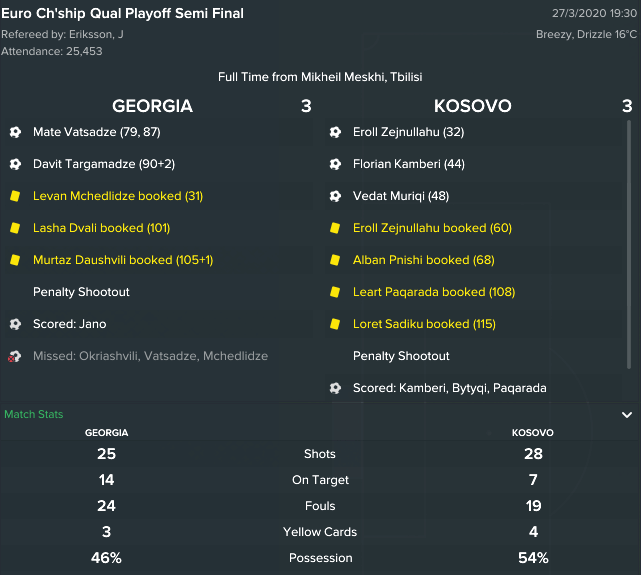 It was somewhat more difficult than it should have been but a delightful outcome for Kosovo who progress to the final of the European Champion Playoff and as such are now one match away from qualification.

The Final will be played against Belarus in the Borisov-Arena. Belarus qualified thanks to a 1-0 away victory over Moldova.

Join me next time for the biggest match in Kosovo’s history as we seek to qualify for Euro 2020!