After a rough start to the save in 2016, Southampton pushed on and finished in a respectable 8th place. Many would become complacent, what with the continually-developing youngsters in the squad, but I know that a club such as ours must always be striving to improve – continually innovating in the shadows of more wealthy competitors. That improvement mustn’t only be made in a management sense (tactics, squad management), but also during the transfer windows.

Going into the summer of 2017 transfer window, I have some goals:

Let’s look at the overview of our outgoing transfers. 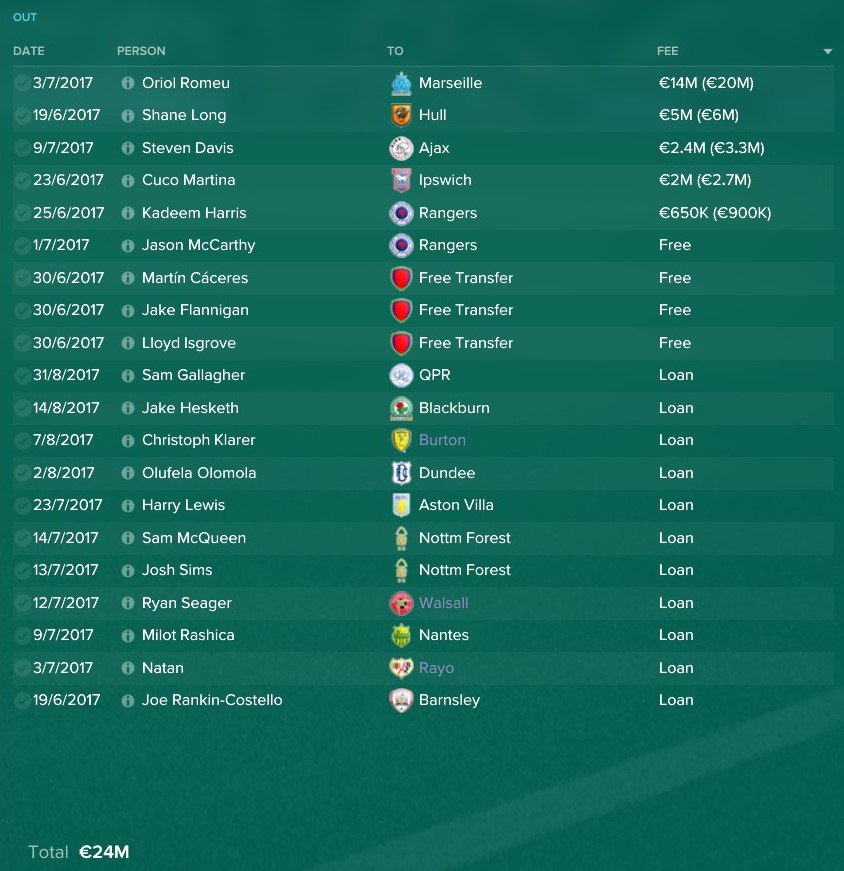 With the sales of three first team players and two fringe players, we’ve accrued a healthy €24m this summer. Shane Long and Steven Davis are both 30 or over and had both requested to leave due to lack of game time (despite the fact that both got long runouts in the team). I would’ve wanted more for Long, especially from a Premier League rival, but 5 million is better than an unsettled player.

Oriol Romeu wasn’t a player I went into the summer looking to sell, but when Marseille offered a cool €14m rising to €20m, I couldn’t pass up the opportunity. Romeu was injured for a few stretches last year and his average rating was consistently below 6.8. I have a good amount of midfielders in the squad still; Jordy Clasie will likely take up the defensive midfield role for most of the matches this season.

A profit made on both Cuco Martina and Kadeem Harris’ transfers pleases me quite a bit, especially with Harris. The winger wasn’t up to scratch as a backup for Redmond, but you’ll later see that I’ve replaced him well. Martín Cáceres demanded to be paid too much for a backup defender, so I let him go on a free. I’ve also loaned out quite a sizeable amount of youngsters, including high-potential Englishmen Harry Lewis, Sam Gallagher, and Joe-Rankin Costello.

Now, what you’ve all been waiting for – Southampton’s summer signings. 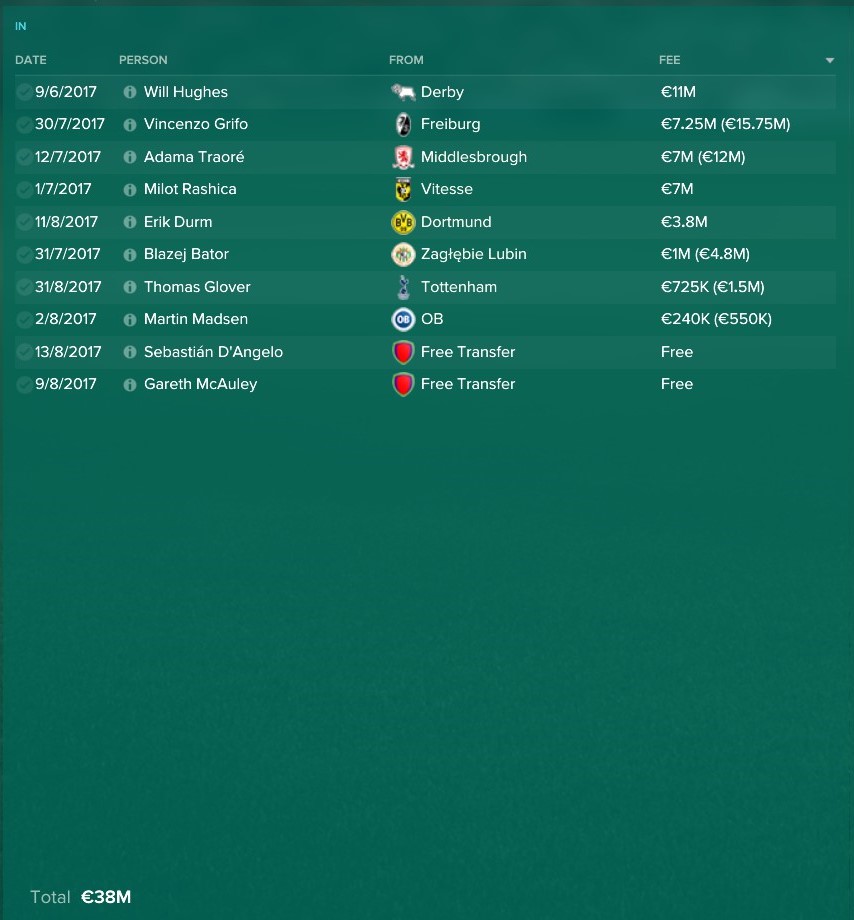 I teased the purchase of Will Hughes last article, and now he’s arrived. Bringing in a young, English midfielder for €11m is great, and I pulled off the signing without any additional future fees. Vincenzo Grifo, a player I highlighted as a possible future replacement for Dušan Tadić, has come in from Freiburg for about €7m (which could double in the future). The Italian is a supreme technical player and will take our set pieces for the foreseeable future.

Adama Traoré and Milot Rashica both join to add depth on our right-wing, although the Kosovan international Rashica couldn’t obtain a work permit and was loaned out to Nantes. Traoré, a former Barcelona youth player, will provide a spark with his great dribbling and pace off the bench this season.

Dortmund’s attack-minded right-back Erik Durm was on the transfer list, so I pounced at the opportunity to add a replacement for the backups who left this summer. While teenage sensation Yan Valery, our 18-year-old French fullback, is on the cusp of becoming a key player in our squad, I’d rather he get more time in the U23’s for a season.

Speaking of youth players, we signed three youngsters to add depth to our youth ranks. The most exciting of the three, Blazej Bator, is a 16-year-old Polish forward with massive potential. He’ll split time between the U18’s and U23’s this season, but don’t be surprised to see him in the lineup within a year or two.  Thomas Glover is a 19-year-old Australian goalkeeper who wasn’t highly thought of at Spurs, so I was able to pick him up for cheap. Finally, Martin Madsen is a 15-year-old left-back – he’ll hopefully add to our contingent of great young fullbacks.

Sebastián D’Angelo and Gareth McAuley were brought in for their experience to tutor our youngsters – they won’t be contributing to the first team squad on match days.

So, there you are. The squad has been cleared of some dead wood and we’ve added a lot of quality depth for the new season. We’ve held on to players like Virgil van Dijk, which bodes well for our chances to improve upon our already solid Premier League record. What position do you think we’ll finish in this season? Thanks for reading.