Lots to get through today before we head to Goodison Park later today for an 8pm kick-off.

The Premier League results saw Arsenal defeat Manchester United at the Emirates, a young man by the name of Alexis Sánchez scoring a goal in the 95th minute after Luke Shaw was sent off on the hour for Mourinho’s side. I don’t know what Arsenal would do without the Chilean. He’s now got 13 goals and 9 assists for the season as the Gunners sit in top spot. Let’s hope for all Arsenal fans they don’t consider selling him.

At one stage Leicester City looked certainties for relegation but have turned things around to now sit 17th, having defeated Bournemouth this weekend. Manchester City survived a scare to beat Crystal Palace 3 – 2 with all three City goals coming in the last half hour. They’re now 5th in the league under Luis Enrique.

West Ham United vs. Southampton was a boring 0 – 0 draw but a point apiece does mean that the Saints leapfrog Everton into 11th. In the Saturday late game on BT Sport, Liverpool came away from Wembley with a 1 – 0 win over Tottenham. Liverpool are 2nd behind Arsenal in the table, Tottenham struggling in 6th.

On Sunday Sean Dyche’s Burnley had the chance to put me in my place after suggesting they would struggle and go down this season, they went away to Brighton and it was a big game for them as I have pointed out, they play three top-six sides in their last six games. They needed a win over Brighton but could only secure a point for a draw.

Congratulations are due to our Under 23 Manager Cameron Toshack, who saw our development side secure a massive 5 – 0 win over Peter Beardsley’s Newcastle Under 23’s in the U23 Premier Division Cup Quarter Final. They go into the semis with potential opponents Bristol City U23, Middlesbrough Under 23 and either Burnley U23 or Norwich U23. Obviously, Cameron Toshack’s men have been taking inspiration from our own FA Cup exploits. I did allow Mael Davies to play but the star performer was Botti Bia Bi, who scored two goals after I identified him as a potential star of the future last week.

On Friday I talked about our own injury concerns, Everton are similarly under the cosh. Ashley Williams has a twisted ankle, Oumar Niasse has a dislocated shoulder, Nikola Vlasic a pulled groin and Davy Klaasen is suffering from a tight calf. Yannick Bolasie will not be seen in another three-to-six months due to damaged cruciate ligaments.

In Everton’s last five games, they lost the first three against Liverpool, Leicester and West Brom (an aggregate score of 8 – 1) before overcoming Burnley by one goal to nil thanks to a Leighton Baines penalty and then put Colchester United to the sword in the FA Cup sixth round. It’s worth noting that we do play Everton again in a few weeks to contest the FA Cup semis.

I do feel sorry for Wayne Rooney, his fairy-tale return to Everton has turned sour with only eight starts in the Premier League and five appearances as a substitute. He hasn’t scored a goal or provided an assist in the league, he’s been transfer listed and now finds himself in the Under 23 squad. 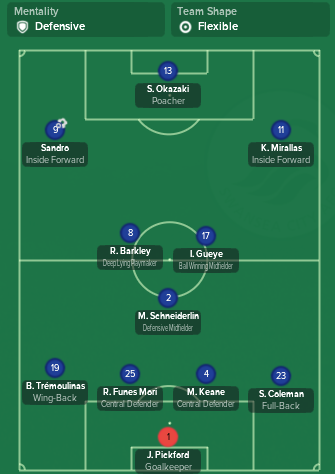 I’m not entirely confident in that lineup for Everton, I think Baines will start after his goal against Burnley and Sandro has more often than not been selected as the central striker.

In terms of our selection, it will be the tried and tested 4-4-2 with Tom Carroll partnering Renato Sanches in central midfield. I did wonder about playing Roque Mesa beside Sanches but I feel Carroll’s presence dropping back to sweep up will be necessary. Ángel Rangel looks fit enough to start only his fourth league game of the season.

Join us on @TheHigherTempo for live coverage, starting at 7:45pm with the teamsheets and kick off is at 8pm.