Later today, Charlie Tango’s Swansea take on David Moyes’ West Ham United and the Hammers are up in fifth in the Premier League. I’m pleased for Moyes, I didn’t appreciate the way he was treated at Manchester United (this also applies for Roy Hodgson at Liverpool) so to see him reclaim his reputation back is great to see.

Let’s go through the formalities. Firstly, the results of several fitness tests are in and the news is fairly positive.

Leroy Fer, Wayne Routledge and Renato Sanches have all passed their respective fitness tests, although it’s advised Sanches can only perform for 45 minutes. In my world that means less than 45, which means he’s a substitute. While Fer and Routledge can play, neither will start. Luciano Narsingh failed his fitness test as his twisted ankle hasn’t become un-twisted yet. Rangel still isn’t ready either, his hip injury still bothers him.

West Ham’s last game was a 3 – 1 loss away at West Brom, Lanzini equalised after James Morrison opened the scoring before Kieran Gibbs and a second from Morrison made the points secure for Pochettino’s Baggies. Interestingly, West Brom caused Moyes’ central midfield three to be almost on top of each other in their position map and Marko Arnautovic had to track back more than he is comfortable with.

I did think that the Moysiah would have just bowed down to Arnautovic as West Ham’s best hope of success but in contrast to what you would have expected, he has kept faith with Javier Hernandez up top as the lone front man.

Odds-wise West Ham are apparently ‘clear favourites’ according to SportPesa. The Hammers are 4-5 on, compared to 3-1 for us. Adrián won’t feature having suffered a slipped disc, Diafra Sakho has pulled a hamstring and Antonio is a doubt due to a pulled calf muscle. 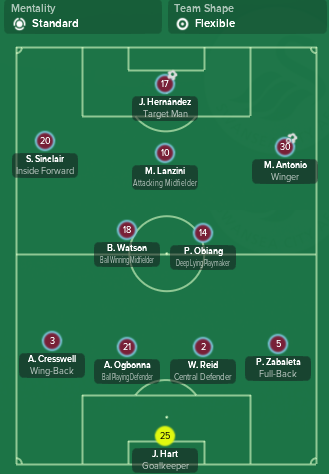 In terms of our selections U23 right-back Mael Davies continues in the side following winning your vote and putting in a good shift last week against Stoke City. It was a choice between Andy King and Roque Mesa to start with Sanches not passing that fitness test but I’m sticking with King, Bony comes in for Tammy Abraham after I panicked following reading about the team dynamics, hierarchy and social groups.

Join us on @TheHigherTempo at around 2:45pm for the full team news and we feature live coverage from there, kick-off is at 3pm. Wish us luck!