You could have been very mean to me this week, but alas you were kind. Thank you. At the heart of the #LetouDecide project has been interaction and the journey of a season with Swansea City, so to have votes taking place each day this week was something of an unprecedented move but you the readers, have put together a team that should see off Reading tomorrow on @TheHigherTempo.

Let’s run down the team sheet as we prepare to face Ryan Giggs’ eleven: 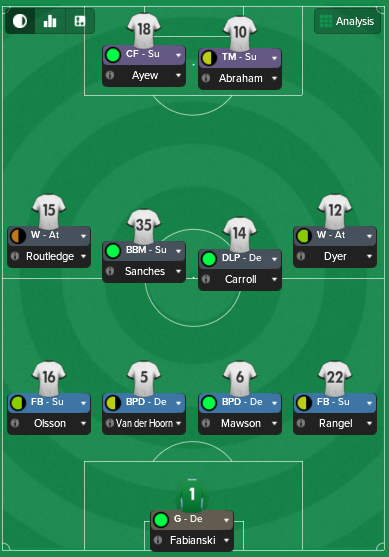 I should add, in addition to Kyle Naughton’s injury, André Ayew and Andy King are cup-tied. We sent Jay Fulton on loan to Reading in January so he can’t feature against us either.

I haven’t examined the Reading team or looked at them in much detail. If we’re struggling to beat a Championship side in 16th place then we really are in trouble. Ryan Giggs is managing Reading these days, Jaap Stam having been dismissed very early – the end of September. Giggsy got it until the end of the season and they haven’t lost a game since Millwall at home on February 3rd. In nine games they’ve won six and their aggregate score during that time is 16-4.

In their FA Cup run thus far they’ve dispensed with Swindon, Norwich City and Peterborough so we’re the first Premier League side they’ve come up against and I hope, the last. They did recently play Wolves away and won 1 – 0 so there’s some pedigree to consider. They should play a 4-4-2 with the most interesting aspect to my eye the positioning of Roy Beerens as an inverted winger, we don’t see many of those.

Kick-off is at 1:30pm tomorrow, live coverage will be featured as always on @TheHigherTempo. We’ll have teams from 1:15pm and a match review on Monday. My dream of leading this team out at Wembley is still on, here’s hoping we’re still in the FA Cup come the start of the coming week.