Before I have a look at the expected formation for Stoke City, I’ve actually just been given some good news. Both Wayne Routledge and Renato Sanches will get through 60 minutes of action and Leroy Fer could play if required. Considering I wrote Fer off completely, that’s a comeback on the scale of Lazarus.

Stoke have been playing a variation on 3-4-3 this season but I don’t have much faith in my scouts. The word ‘inept’ doesn’t cover it. So far in the last several weeks the only team they’ve got right is Portsmouth and that may well have been telegraphed it was so obvious. 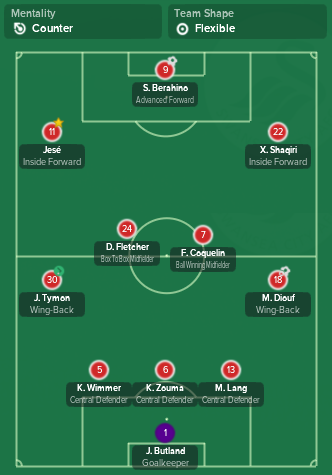 If Jesé plays it will be at 59% condition and 35% match sharpness so rule him out. I would guess that Maxim Choupo-Moting starts wide left. Joe Allen should partner Coquelin in central midfield, Erik Pieters is a better choice at left wing-back, Shawcross or Martins Indi should play alongside Zouma and Wimmer at the back. Other than that, great job guys [/sarcasm].

The Stoke positives are in jumping, creativity and the quality of their spine with Butland, Zouma and Coquelin. Their headers won rank second in the league and the majority of their assists in the last 18 matches have come from crosses. Of course they have.

Weaknesses are tackling (only 17th in the league), strength, passing, leadership and their recent away form ranks 16th in the Premier League. Some of those are a surprise (strength and leadership) but if you leave out Ryan Shawcross, what do you expect?

In terms of our team, thanks to your vote Mael Davies has been promoted from the U23 squad to serve as our right-back, retaining the 4-4-2 which has done so well for us. I’m not entirely confident in his abilities if I’m honest and should we lose to goals from his side of the pitch I will blame all of you.

The one thing I am clinging onto like a child to a safety blanket is that he will be up against whoever plays on Stoke’s left, which probably will be Choupo-Moting and not Shaqiri. I can’t tell you enough how highly I rate the Swiss maestro. I was surprised none of the big clubs came in for him in January because I refuse to believe he wouldn’t slot in like a hand into a glove in Chelsea’s team, Liverpool’s, even Manchester United’s.

Well feature live coverage of the game from the Liberty this afternoon from 5pm with kick-off happening at 5:30pm on @TheHigherTempo. Join us to find out if we can maintain the recent good form. I’m just praying for no more injuries. I went to Sunday school, I attended my local Methodist church for years. I put my time in, surely I can be granted a game without somebody breaking down?