Later today (kick-off at 5:30pm, live coverage on @TheHigherTempo) Swansea welcome League One side Portsmouth to the Liberty Stadium in the fifth round of this season’s FA Cup. It’s one I am desperate to win, although I’m not exactly sharing that fact with the players.

In fact, if you read yesterday’s press conference then you’ll have seen me ‘do a job’ in front of the media to repeat the same theme of preaching concetration and application, despite our tags as comfortable favourites.

Portsmouth got to this stage by putting out Mansfield Town, Bristol Rovers, Wigan Athletic and Burnley. They held Burnley at Turf Moor in the last round before knocking them out at an intimidating Fratton Park. By contrast we have seen off Championship sides Bristol City and Preston North End. Other good Premier League sides have fallen by the wayside and as I write this, Newcastle United defeated Manchester City in the Friday night game live on BBC.

Under Stuart Pearce Portsmouth are in good form. They’re second in League One and beat Blackburn Rovers 1 – 0 in their last game. They are some 14 points off runaway leaders Charlton but are in with more than a shout of second place considering they are one point and a game in hand ahead of Fleetwood Town.

Portsmouth are twice winners of the FA Cup and a capacity crowd expected at the Liberty, which is a nice little earner in addition to £250,000 television money. 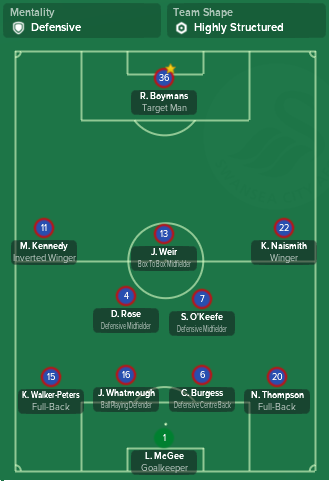 Of the Portsmouth lineup midfielder Danny Rose has been around the block, starting out at Manchester United before dropping into non-league football and working his way back. Jack Whatmough has been with Pompey for five seasons now and is a consistent performer.

In terms of the Swansea squad, Renato Sanches is our big miss but Leroy Fer will be equally as disappointed, he would have started had he not twisted his knee. Both Andy King and André Ayew are cup-tied. Portsmouth have Tareiq Holmes-Dennis out due to damaged cruciate ligaments and Tyler Roberts on loan from West Brom is cup-tied.

I will be rotating our squad around, which I think is understandable. Roque Mesa will continue in central midfield but there will be rests for Alfie Mawson, Tom Carroll and Lukas Fabianski. There is no right answer to the question of whether to play Jordan Ayew. Don’t and his recent form could be lost, do and he might have a stinker. I think I’ll stick with him and bring Tammy Abraham back alongside him.

I am more than slightly concerned about Kyle Naughton. Ideally I would like to rest him but with Olsson taking up a place on the bench and young Cian Harries coming in at left-back, I do want the added assurance that Naughton provides. I’ll start Kyle and look to bring him off on the hour. God, I hope I don’t regret that.