In this series, we will be looking at replicating a specific team’s tactics in Football Manager. We will do this by analysing how a side faces up to opposition in real life, then replicating that in FM. This can then act as a guide to FM, demonstrating how real-life football is represented in the match engine. So, the way a certain player moves without the ball, or what overlapping full-backs actually look like. It will also indicate which tactics are required to translate actual football styles into the game.

To kick things off, we will analyse the lowest rung of the so-called “Top-6”, Arsenal. The end of 2016/17 saw Arsene Wenger go with the flow and change his Arsenal side to a 3-4-2-1. This was the first time since the 1990’s that Arsenal had set up with three defenders, and has become the go-to strategy for the Gunners this season. 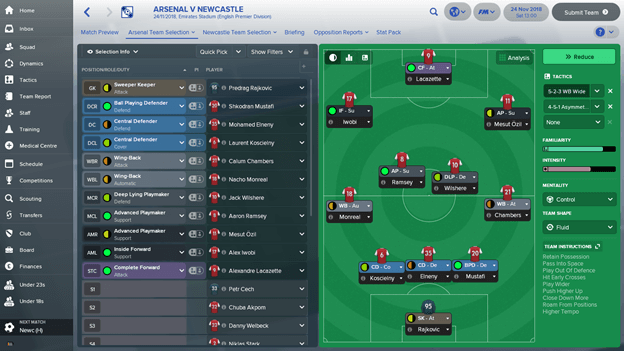 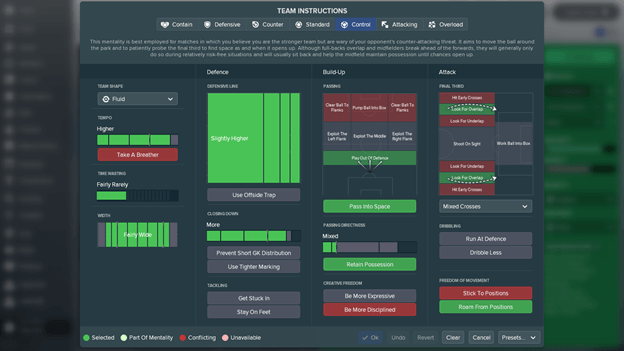 What makes the three defenders so critical, particularly to a side like Arsenal with marauding full-backs, is that there is always a solid defensive base, allowing the rest of the team to attack and stretch deep defences. The issue with the Arsenal 4-2-3-1 is that as the full backs push on to break down a particularly stubborn defence, the two centre backs are overexposed to a sudden counter-attack.

Take a look at this clip in the early stages against Chelsea. The defence is high, and Chelsea immediately fire a pass up the field to catch the Arsenal defence out. Two centre backs may be caught by this ball, but with three central players, two can hold their shape, while Koscielny (showing off the “cover” duty) can drop deep to challenge Pedro. This deep drop gives the wing-back time to recover, and eventually the attack comes to nothing.

This exemplifies how Arsenal like to defend. High up the pitch, pressing much of the football into the opposition half, to leave the creative attackers with as much possession as possible, to carve out a chance. Unfortunately for Arsenal, the tools to carry out this high press have departed in recent years, particularly the sweeper keeper, Szczesny. The following two clips, both from the 2013/14 season, demonstrate how Arsenal like to play, and how a mobile keeper facilitates that.

The first clip shows Szczesny arriving quickly to deal with a ball through the defence, even after the back four miss it. He is on his toes at all times, and as a result the Arsenal defence can push higher, safe in the knowledge that the space behind them is being monitored.

By contrast, the same defence cannot adapt to a keeper who is less willing to leave his box. Here, the red circle indicates where Fabianski should be when Jenkinson attempts to head the ball back. That is where a sweeper keeper would be, and takes the pressure off defenders when dealing with a counter attack. The header is poor, but indicates how an alert keeper can prevent goal scoring chances arriving from such mistakes.

Arsenal’s current keeper, Cech, is not particularly mobile, being less comfortable with both feet than Szczesny. As a result, the high line usually adopted by Arsenal has to take a few steps back, which frees up space in the midfield. The power of a mobile keeper cannot be underestimated, just ask Neuer at Bayern, Ederson at Man City or Bravo during the Barcelona treble a few seasons ago. This heat map of goalkeeper Rajkovic, a sweeper, demonstrates how much of the space behind a defence can be covered. 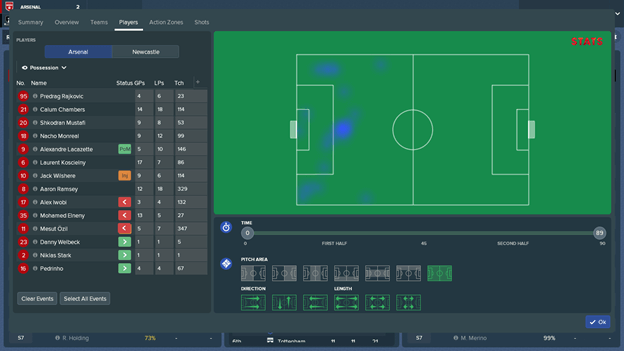 The unrelenting pressure that Arsenal try to put on the opposition defence is what earns them resounding victories against weaker sides, but requires a significant amount of discipline from deeper players should possession be lost.

Critics suggest that Arsenal lack a quality backbone to succeed, requiring a better striker, midfield pair and centre back partnership. Indeed, Arsenal prefer to utilise a shell, strong players in the wings and centre of midfield, with a world class CAM to organise this shell to score goals.

Ozil did this job to his supreme best in this clip. The rest of the attack played in their positions, and acted upon the ball as it came near them. Ozil roamed freely, forcing the play, resulting in an excellent goal from the waiting Lacazette. The German tends to start on the right, but picks the ball up on the left of Iwobi, the other CAM. Watch Iwobi, Wilshere and Lacazette, as they barely move throughout the clip. Defenders don’t know whether to follow Ozil or stick with their man therefore, until the ball is moved to the striker, and a superb goal is scored.

Rather than a study of Ozil, this is how Wenger likes his CAM to operate. Whether it is Fabregas, Rosicky, Wilshere, Ramsey, Cazorla or indeed Ozil, there is one man in the squad who is expected to vacate his space at any moment to link other players together. The heat map of Ozil in this FM game encapsulates how the advanced playmaker role is applied at Arsenal. 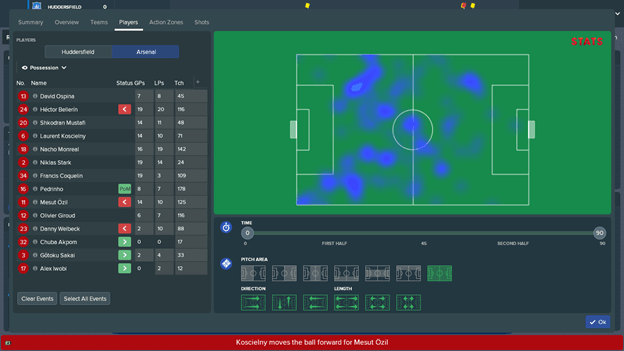 This technique works for Arsenal. It gives an air of unpredictability to their attacks, which is vital when the opposition are sitting on their own 18-yard box. However, if every attacker started flowing into one another’s positions to dazzle the opposition, this leaves little structure, so if the ball is lost and things go south, a counter attack can be fatal.

Arsenal’s midfield is based very much on this CAM making the play, but supported by runs from deep to score quick, incisive goals. This run from Ramsey exemplifies that, and can be replicated within Football Manager simply by instructing the centre midfielder to play with an attack role, and the CAM to use a support duty.

The lone striker with no recognised CAM behind him can lead to a lot of work required by the centre forward to find space for himself and make runs. Arsenal are wary about using wide areas for crossing the ball, unless it is Giroud waiting in the middle. Crosses generally find their way to the near post, as this is the ideal place for a striker like Giroud to pounce. These screenshots demonstrate how Arsenal can utilise the wide areas and the ability of Giroud to full effect. 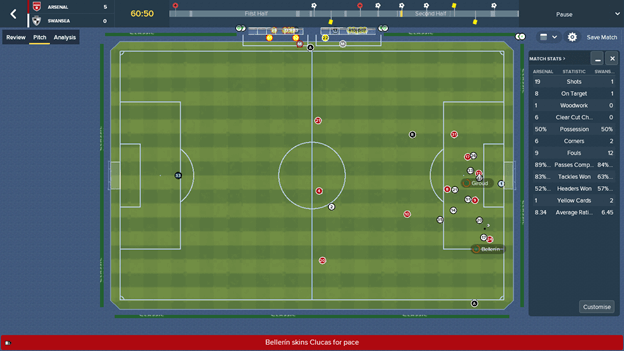 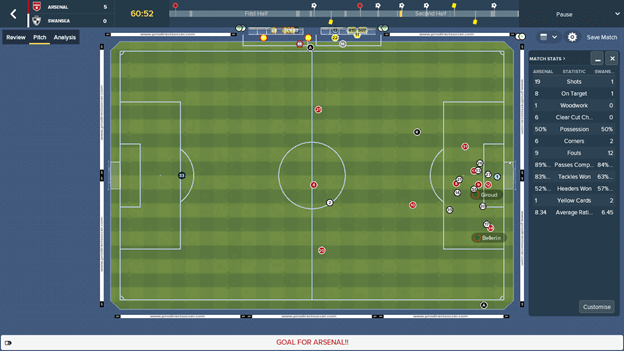 Giroud started the move in the central-far post area, and as the ball came in from Bellerin, he darts towards the near post in front of both the keeper and centre back. Simply setting crosses to be aimed at the near post from each full back will play into Giroud’s skillset. Giroud, a player with above average Strength, Off The Ball and Determination attributes, can respond to short, sharp crosses of this sort, as shown by this goal against Spurs.

Set pieces are not definite at Arsenal. Corners tend to be random, unless Giroud is in the box. Defences from corners tend to be aware of the Frenchman’s ability from the near post and stifle that immediately. Arsenal tend to be more strategic from free kicks, generally aiming for the far post, either looking for a knock-down or attempt at goal. 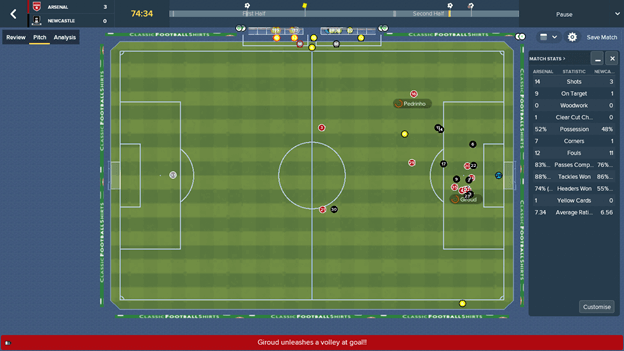 Many of the features that make Arsenal distinguishable can be simply replicated in Football Manager. The high defensive line, the increased use of full/wing backs and a CAM with no anchored role are the main features, and can be used to devastating effect within the game.

Some teams, particularly those with a high turnover of managers, also undergo a high turnover of playing styles. It would be futile, for example, to analyse a team like Everton at this time, because they have undergone such a distinct change of playing styles in the post-Moyes era. Conversely, a team like Man City have only been playing under Pep Guardiola for the last 18 months, but the playing style is so distinguished that it can be replicated within Football Manager.

Football Manager is an incredibly intelligent game, but you need to know the inputs required to work your magic. Hopefully these guides can help bridge the gap between real-life and the PC.