It’s a big game tonight against Newcastle United. It’s so tight at the bottom of the table that a win here could propel us up the table and more importantly, give us some much-needed breathing room ahead of consecutive games against Arsenal and Manchester United.

Huddersfield did us a favour by beating Watford 2 – 1 last night, that means we do have both a points and game advantage over the Hornets.

Newcastle have been solid, yet unspectacular this season. Looking at their results only twice since September have they won two in a row but they have won three out of three at home in the last few weeks. Admittedly two of those were Millwall and Brentford in the FA Cup, the other one was to bottom club Leicester, so it’s not all to worry about too much. 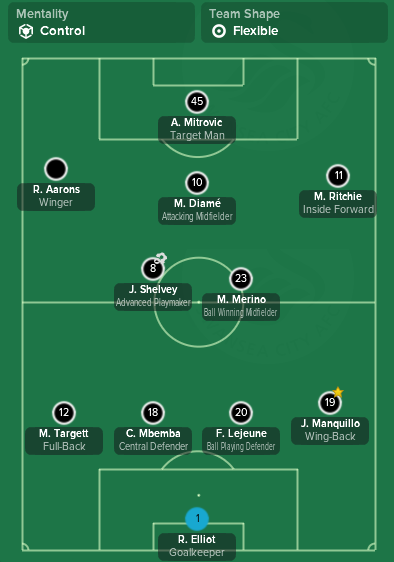 Again there’s a big gaping chasm between the defence and midfield, which is where we’ll look to exploit and in behind the two wingers. Neither Aarons or Matt Ritchie look particularly good going backwards, in fact, the two full-backs look more comfortable attacking than defending. Shelvey will roam with a lack of discipline, while Merino should be outnumbered. That’s the theory anyway.

In terms of our selection, we’re looking at keeping a consistent team with our last league game. Sam Clucas has worked very hard in training, he returns to the team because he offers better balance than Narsingh, van der Hoorn stays in defence, Fabianski and the full-backs return after being rested against Preston. Up front, I’ve decided to recall young Oliver McBurnie from a loan at Barnsley. With Bony and Ayew both not fit enough to start, he’s straight into the team.

McBurnie has scored six goals this season for a Barnsley side in mid-table in the Championship, which isn’t exactly overwhelming but needs must. It’s all hands on deck at this stage of the campaign.

Join us on twitter @TheHigherTempo from 7:30 this evening for exclusive live coverage of this vital fixture.