Time for the pre-match press conference and time to sort our tactics ready for tomorrow’s game against Leicester!

Reporter: It’s fair to say Swansea didn’t have the best of times against Tottenham, so are you looking for a reaction from your players in this game?

Me: The whole team wants to bounce back with a win.

Reporter: A defeat here could see Swansea fall into the relegation zone, so how important is a positive result?

Me: That’s a silly question. Have a think about it.

Reporter: History has shown that teams can generally stay in the Premier Division with 40 points. Is that the magic number for you and your team this season?

Me: I think it’s too early to say to be sure. We don’t know how things will go.

Reporter: Are you confident of reaching that target?

Me: I rate our chances highly. We know we’re likely to be involved in the discussion but we’ve got the players to make a real go of staying up.

Reporter: Recent reports have suggested that you are keen on making Tammy Abraham’s loan stay a permanent one. Are you prepared to go on record with your thoughts on the story?

Me: I won’t be discussing any transfer stories today, sorry.

Reporter: Despite pre-season hopes of a top-half finish in the league, Leicester find themselves in 19th place in the Premier Division table. We’re going to be in for a real relegation scrap here but are you confident of coming out on the winning side?

Me: I would rather focus on the game rather than needlessly discuss it.

As with Tottenham, Leicester are likely to play a 4-4-2 as seen below. 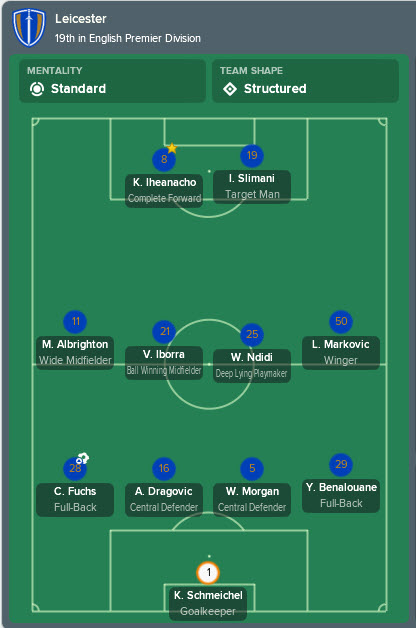 Since the plan for Tottenham so almost came off, we’ll be playing the exact same way – a 3-5-2 system that forces the wingers central and closing down the central midfield at every chance we get.

Joins us tomorrow at TheHigherTempoPress Twitter from 2.40 for live coverage!