It’s been a big week away from Football Manager and, amidst it all, I’m preparing for a new challenge. I don’t want this save to end but I’m keen on what I’ve got planned. Is it possible to run two saves together? I’m not sure. Let me know what you want to see, my Twitter is @Challies11!

Therefore, I’m keen to go out with a bang. A 100% start to the season has seen us accumulate a four-point lead at the top of the table and secure a superb victory in the Champions League against Inter Milan. We’re now in October- and the fixture schedule has not been kind at all. 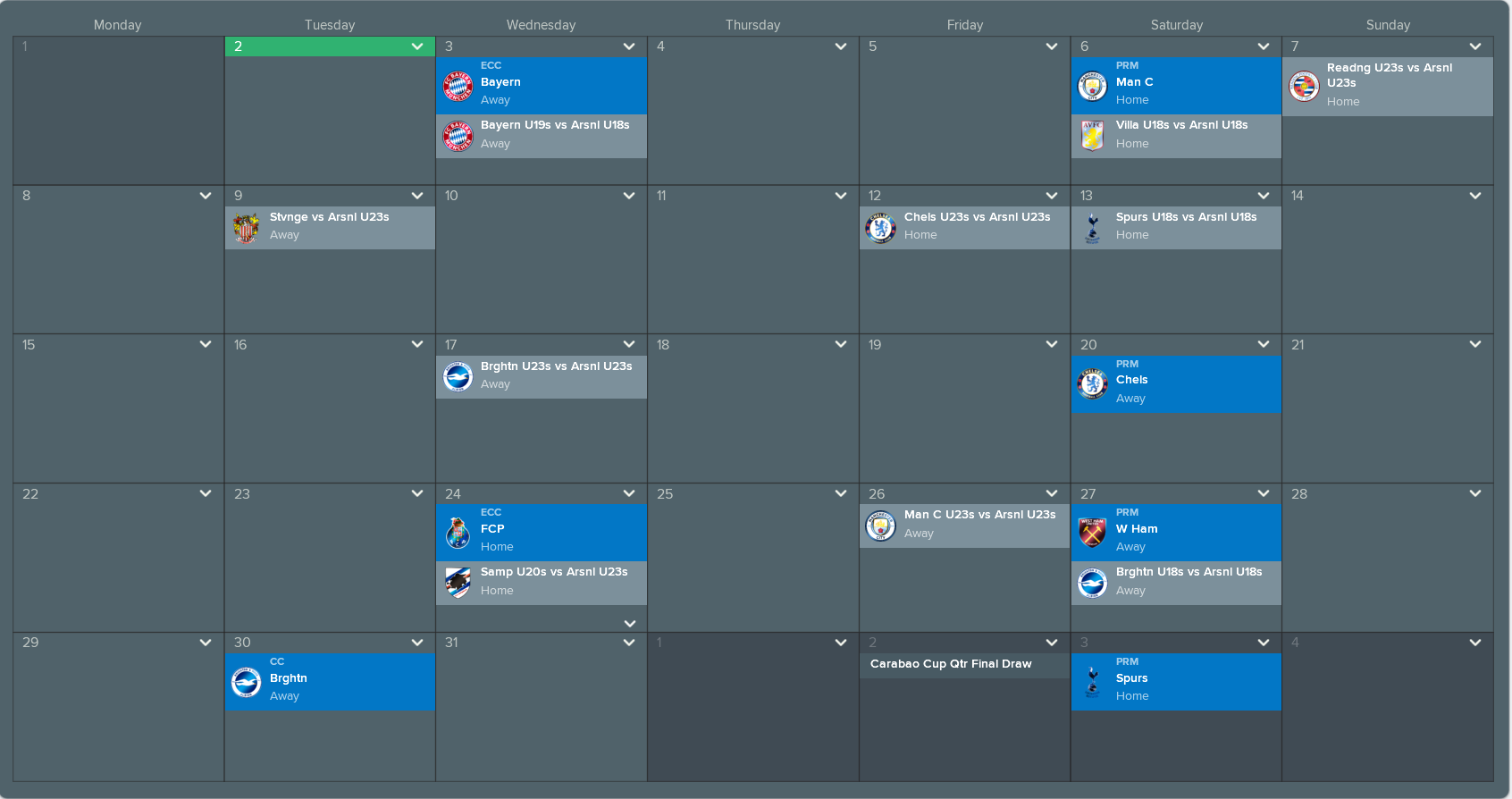 Mustafi is injured for the Bayern game, and likely for the next month, which is a huge blow and a big test for Chambers. At the Allianz, Lacazette opens the scoring but Arturo Vidal equalises ten minutes into the second-half. I’d be happy to take a point but Gelson Martins puts the hosts ahead before swiftly adding a second, so we lose 3-1.

Wilshere picked up a knock in that game so misses the clash with Manchester City and Xhaka is still carrying a problem, so Ramsey slots in alongside Coquelin. All is fine though, as three quick goals from Fekir, Lacazette and Coquelin have us flying. French Connection and all that.

Guess what happens? We do an Arsenal. Aguero and David Silva pull the Citizens back into the game, which is setting things up nicely for the neutrals. Not for me though, I’m furious- but Fekir is a nice bloke and scores again. Seven wins out of seven in the Premier League, not bad at all.

Chelsea are next and I’m glad to see Xhaka back, though Hazard puts the Blues ahead early on. Iwobi does equalise and Lacazette scores a penalty, so we lead 2-1 at the break. Fekir gets in on the act in the second-half but Morata keeps the game alive, with Willian equalising soon after.

Welbeck’s 50th league goal of his career makes it 4-3 but Fabregas then scores, tying the scoreline once more. It seems it will finish level but the Spaniard nets again, handing us our first league defeat of the season- and our first in 11 Premier League games.

The positive is that teams below us also slipped up, so our lead at the top stands at three points. Our next task is against Porto in the Champions League, where I’m keen for us to win. We do, with Iwobi and Welbeck on the scoresheet, rising to first in the Group of Death.

Back in the Premier League, it’s a trip to high-flying West Ham. An awful start sees us fall behind early on to a Javier Hernandez goal and it gets worse in the second-half, with Andre Pierre-Gignac doubling their lead. Back-to-back defeats see us drop to second on goal difference, behind Spurs of all teams- who we play next in the league.

Before that, it’s the Carabao Cup with Brighton. I rotate very heavily, handing Justin Kluivert his debut, but Michy Batshuayi (Yes, I don’t know either), puts them ahead. Thankfully, Rob Holding equalises and Giroud nets from the spot. Pascal Gross’ deflected free-kick pulls it level but Elneny restores our lead, so we win 3-2.

November is again full of challenges, starting with the North London Derby. Ten minutes in, Lacazette does what he does best, with Holding then scoring for the second time in a week- though Koscielny puts it into his own net, making it 2-1. Bellerin scores after the break, with Lacazette, then chipping in again. 4-1, three points. Mind the gap.

Champions League action against Porto follows and victory will really boost our chances of securing a spot in the next round. It doesn’t start as planned, with Javier Aquino opening the scoring and then notching his second. Koscielny does pull one back but Aboubaker then restores the hosts’ two-goal advantage.

Iwobi nets, setting up a thriller, and Xhaka then snatches an equaliser. 3-3 and it’s only half-time. It does settle down after the break and finishes level, so, we stay top of the group with a two-point advantage.

An incredibly difficult six weeks now comes to a finish with the small matter of Manchester United at Old Trafford, without Iwobi due to international duty. Again, we start poorly as Lukaku gives the hosts the lead, before Martial doubles the advantage and Kolasinac is sent off. We’ve been woeful.

When Lukaku adds a second, the game is over. It leaves the title race wide open and makes it clear that we have work to do. I didn’t expect us to win the title this season but the performances in our recent defeats have been sub-par, which I make very clear, though the loss of Mustafi in defence is noticeable.