Some teams are simply not blessed with wide players. This generally isn’t the case with club sides, as they tend to ensure they are fully stocked in every position. National sides, however, have to work with what’s available. In some cases, this can lead to an abundance of players in one area of the pitch.

4-4-2 diamond is the obvious answer to an overreliance on central players. And one national side that can’t move for central attacking players is England. 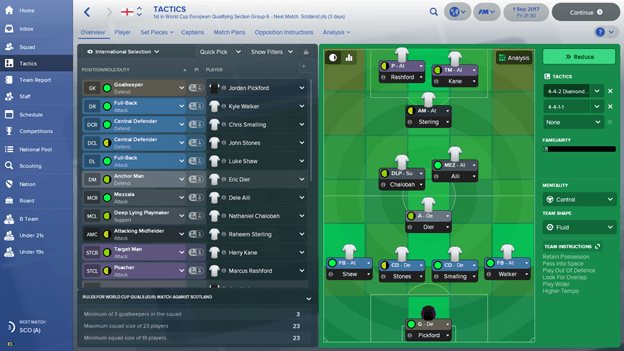 As this screen shows, the diamond can provide total domination of the midfield. The only areas of the pitch vacated by the diamond are the wide attacking areas. However, the attacking full-backs do a lot of the work in this instance, providing deeper crosses than natural wingers may provide. 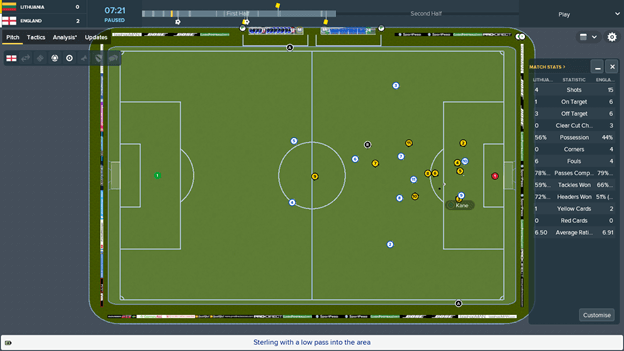 This image shows the formation working perfectly. The CDM acts as a shield for a counter attack, the full-backs cover the wings, while the midfield three dominate the central area. The two strikers occupy the defenders, and luckily one of them is Harry Kane, so is strong enough to force himself in front of the CB.

This formation is similar to 3-5-2, in that the full-backs act as wing-backs, the midfield is packed out and a pair of strikers lead the line. The difference between them is the CAM. 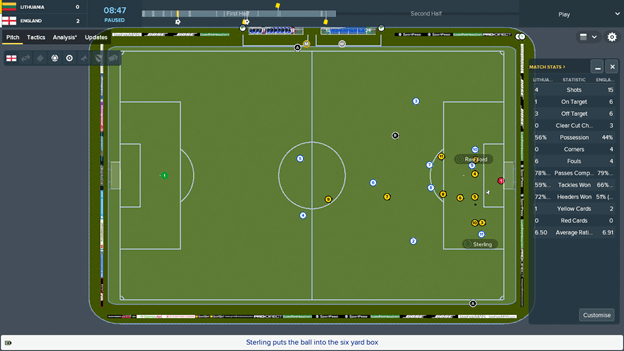 Sterling, filling the CAM role here, can drift wherever he chooses. In this instance, he pulls wide to receive the ball, before floating in the cross.

The lack of anchor on Sterling, supplemented by the strong midfield cover behind him, means that opposition defenders and CDM’s can’t track him. In this instance he pulls away, and the strikers are queueing up to make it 1-0.

4-4-2 diamond is indeed very central. However, to combat this, one of the CM’s can be played as the mezzala, a new role in FM18. This utilises the half-spaces, by the CM pulling wider. This exploitation of the wider areas by (just one of) the midfielders means that more ground is covered when attacking, while maintaining that midfield dominance.

The that dominance is only useful in defence if the full-backs maintain their position. With no wingers to cover, if he is exposed by the opposition, there may be no way for the defence to cope. 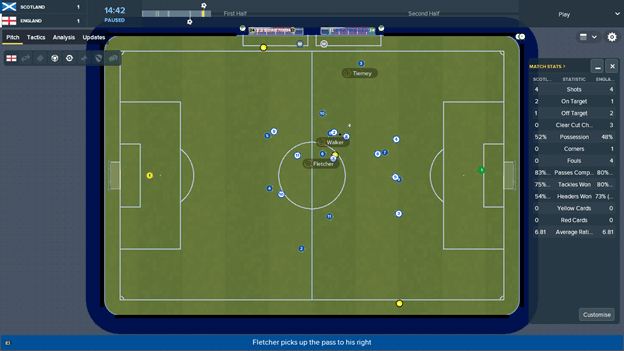 In this image, Walker has come in to tackle the midfielder, leaving the defence way too overexposed.

This demonstrates the drawbacks to the flat back 4. If playing against a side with full-backs and wingers, there can be an unrestricted overload on the wings. To combat this, full-backs can be set to close down less, which will prevent them being dragged out of position.

The diamond is impossible to defend against, but worryingly easy to attack. Consider using it against midfield-heavy teams, or against weaker sides who will be unable to mount decisive counter attacks.