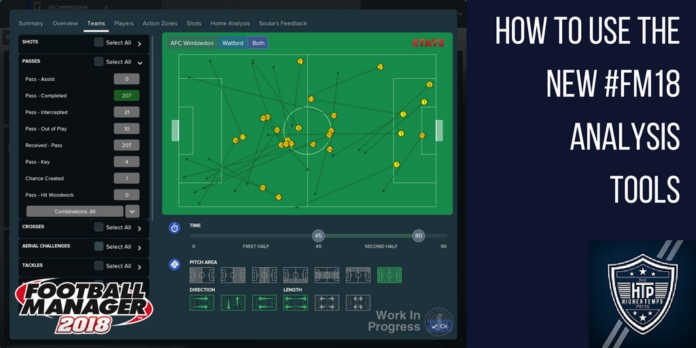 The role played by analysis in football today is seemingly ever expanding as teams drill down in to the available data in an attempt to gain a competitive edge on the opposition. Alongside this more data driven approach we have seen data analysts and technical recruitment departments at clubs get more exposure in the media as interest in their role in football grows.

In keeping with the efforts made by Sports Interactive to have Football Manager mirror the real life game the release of Football Manager 18 sees the introduction of even more analysis tools to enable the player to drill down in to their tactics and see just what is working and what is not.

The introduction of analysis tools in the first instance added an extra layer to the game with players now able to take an even more realistic approach to their management style. The purpose of this article is to look specifically at three of the new analysis options that have been included within Football Manager 18. 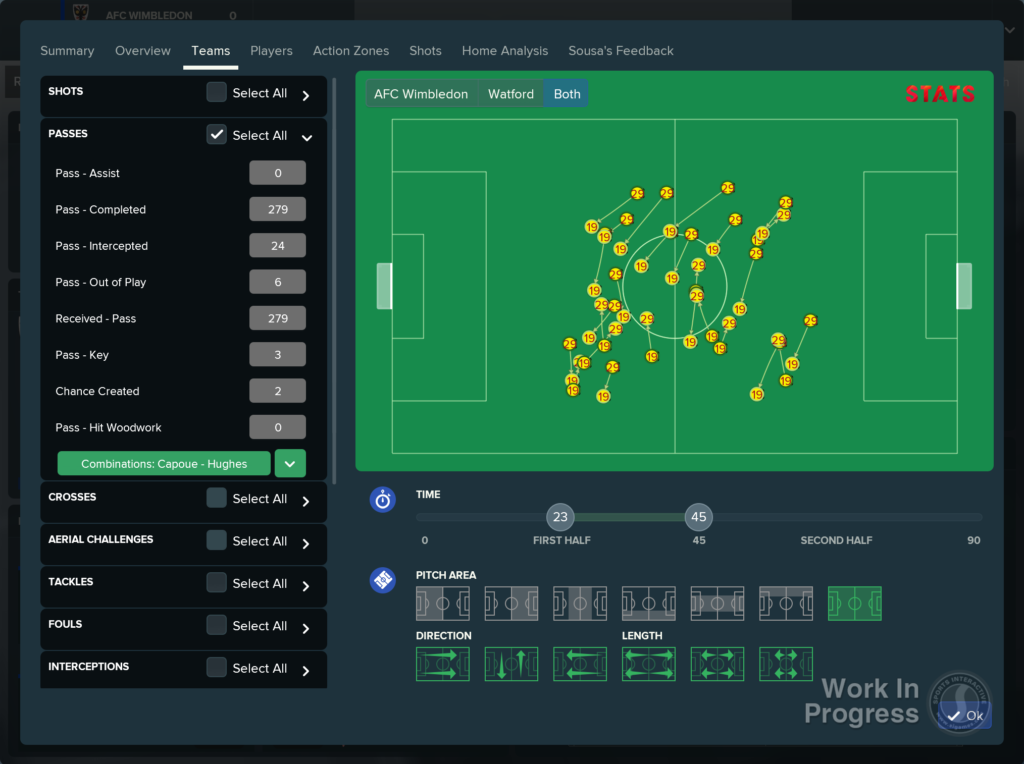 The first of the new analysis tools that we will cover is the addition of the pass combination table and maps. This gives us the ability to drill down and isolate two players with an overview both of the number of passes between the two selected players and then a map of where on the pitch these passes occurred.

The table in the first instance is set to show the amount of passes completed between each play with the pair with the highest number of successful passes at the top. Whilst that information is interesting to give a general overview it is the ability to show these combinations as a visual on a map that gives the most value.

This map gives you an immediate picture as to where on the pitch the two selected players have been combining. This is especially important when analysing your tactics to give you an idea as to the partnerships between individual sets of players.

For example you can isolate your wide attacker and centre forward to see where they are combining. This will obviously be dependent on the roles assigned to these players with a False 9 and winger behaving differently to a complete forward and inside forward. If you are struggling to penetrate in to the opposition penalty area however and you see that your centre forward is dropping too deep to combine with a teammate then amending his role and instructions will change the dynamic of the tactical structure.

At the same time if you have two players who you would expect to combine failing to complete many passes between one another then you can identify the issue and make changes accordingly. For example if you are trying to play from the back and your central defenders and defensive midfielder are not combining as expected then there is either a disconnect in the player instructions or the opposition are covering the pass out from the back and forcing you to play longer. The pass completion tool can allow you to identify that and make changes to counter the AI.

Filter By Pass Length And Direction 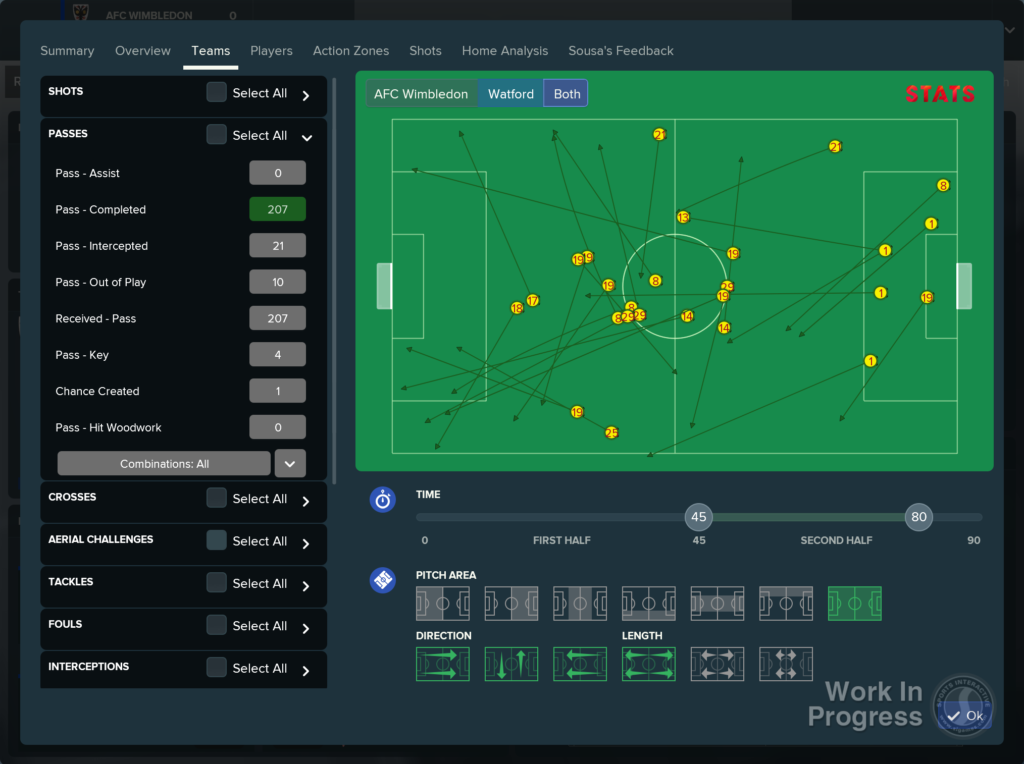 Another of the new analysis tools available to the player to identify issues within their tactical structure is the ability to filter by pass length or direction from the passing menu of the analysis screen.

This option is relatively self explanatory; you can filter by length choosing short, medium or long passes and by events that occur when attacking left or right or when the ball is passed sideways.

The ability to filter by length first of all is another tool that can illustrate where there is a lack of support for players in possession of the ball. If you find that one player has a significantly lower pass completion ratio than his teammates or if you identify within the match engine that one of your players is constantly losing possession then the pass map is the first analysis tool to check. You will be able to identify if this player is constantly looking for the longer pass rather than combining with teammates in a more sensible manner that there is either an issue with his player instructions or with the roles of the players around him not offering suitable support.

Filtering passed by direction gives a similar option. The ability to isolate the passes played when attacking in either direction or that are player across the pitch offers the opportunity to see whether your sides build up play is too slow to penetrate the opposition or whether you have an individual player who is slowing down the pace of your attack.

If either of these are the case then you can quickly identify the issue with any individual role and adapt their role or player instructions to better fit with the framework of your tactical setup. 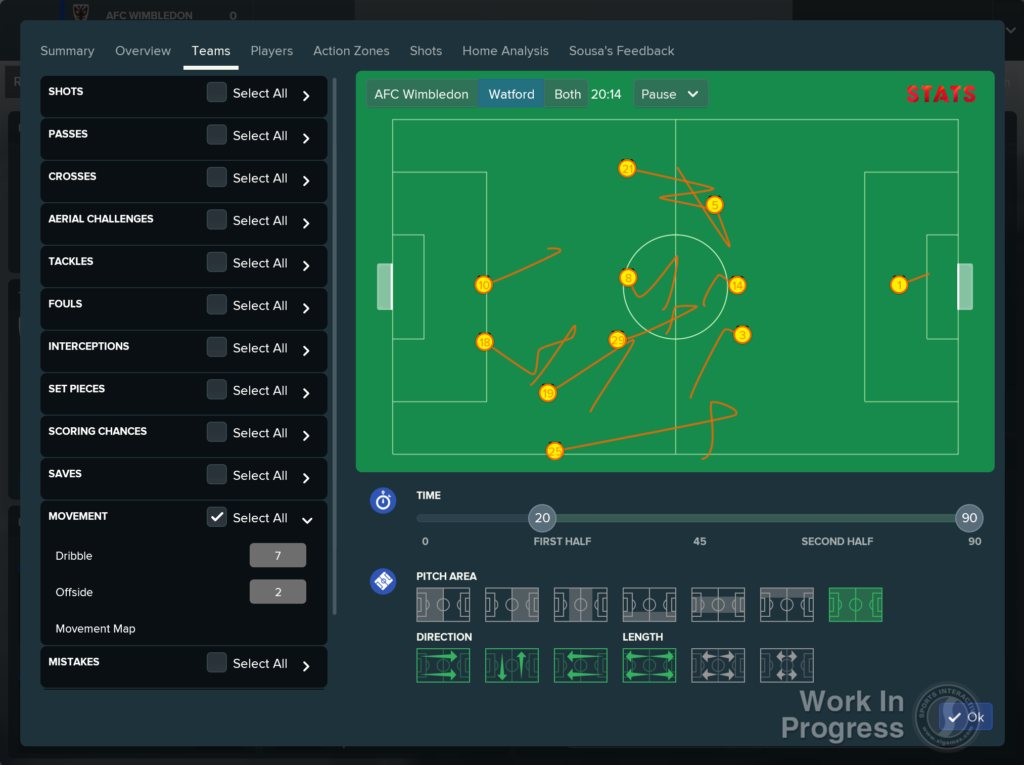 Another addition to the analysis options in this year’s game comes in the form of spaghetti maps. These are designed to give you a clear picture of player movement in your tactical structure to allow you to check that all of your players are moving and behaving in the manner that you expect. Another helpful addition to this analysis screen is the ability to increase, slow down, pause or run in real time the movements of the players at any given moment.

This allows you to check that players are moving in a coherent manner with no gaps that could lead to your attacking phase breaking down or your side being hit by a quick counter attack from the AI.

The spaghetti map analysis is also helpful in looking closely to see what happened to the overall structure when a goal is conceded or indeed when a goal was scored. Being able to pause the movement from your players at any time in particular will give you a much stronger understanding of any inherent strengths or weaknesses your side or your tactic has.

So there you have it, three new additions to the analysis options that you will have at your disposal to ensure that you have all the information at your fingertips to lead your team to glory.