Everton emerged winners in an entertaining and tense battle between the two struggling teams. Swansea dominated possession in the early stages but struggled to find space to shoot, before the deadlock was broken in the 19th minute when Sandro belted home a goal of the month contender.

Swansea manager Stuart Reid reacted not long after changing formation by taking off Sam Clucas in the 27th minute for striker Tammy Abraham. Swansea began to come into the game a bit more but went into the break behind. 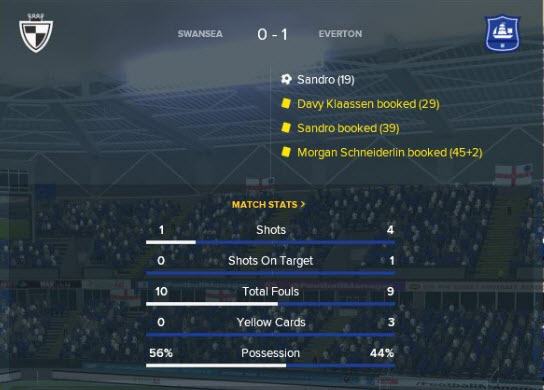 After the break, it was much of the same, with Swansea seeing plenty of the ball but lacking the final end product to stick the ball into the net. Everton were lucky to end the game with 11 players on the pitch after repeated tackles by Morgan Schneiderlin and Davy Klassen, but at the end of the day, it was the Toffees that went home happy with all 3 points – immediately heaping pressure on the new Swans manager.