Home Football Manager 17 FM Stories The Land Down Under XV

G’day, mate! The regular season has come to an end and we’re getting ready for that Australian winter and our downtime for the year, so let’s get to work covering our regular season exploits.

First off, I said in the previous post that I’d provide an update on the Australia situation. I was the favourite already, so it didn’t take much more than having to say “hire me” and I was employed.

I don’t intend to cover the Australia angle too much right now. It would be a lot more posts and detract from the main purpose of the series. In the next couple of years I’m going to focus more on the national angle, but right now I’m going to be working more on developing my club talent.

As far as national team policy, as I said previously, it is my intention to focus on a strong team based on domestic players. I’ll make use of players worldwide if it makes sense to, but I’m always going to make sure the core of the squad come out of the A-League and that the younger players have a chance at the team.

On to the regular season, we really cleaned house this time around. We took the title by a very large margin, proving that the Mariners are the team to beat in the league. 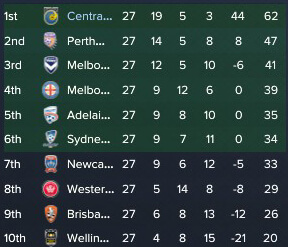 As you can see in the detailed team stats, we were the best about being on target, with 47% of our shots being on point. We scored 57 goals during the domestic season while only conceding 13 of our own. 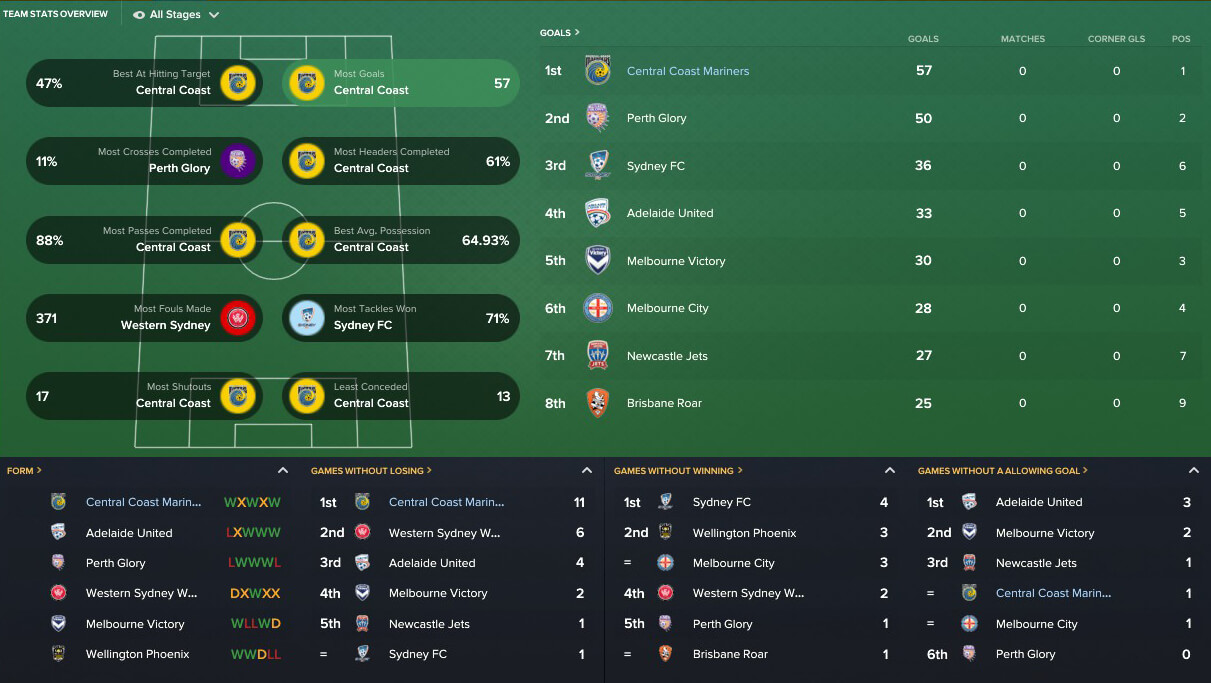 In fact, our fabulous record with goals scored and conceded leads us to the set of stats for the players themselves. We set a record for shutouts with 17 matches completely shut-out. Paul Izzo, our ever-present goalkeeper was personally responsible for 15 of them.

The top goalscorer for the regular season was Ivica Buric, the young 15-year-old Croatian-Australian who joined us from the youth intake a few days before his sixteenth birthday. He was able to net 13 times and outscore Taggart and Keogh, the usual top scorers. 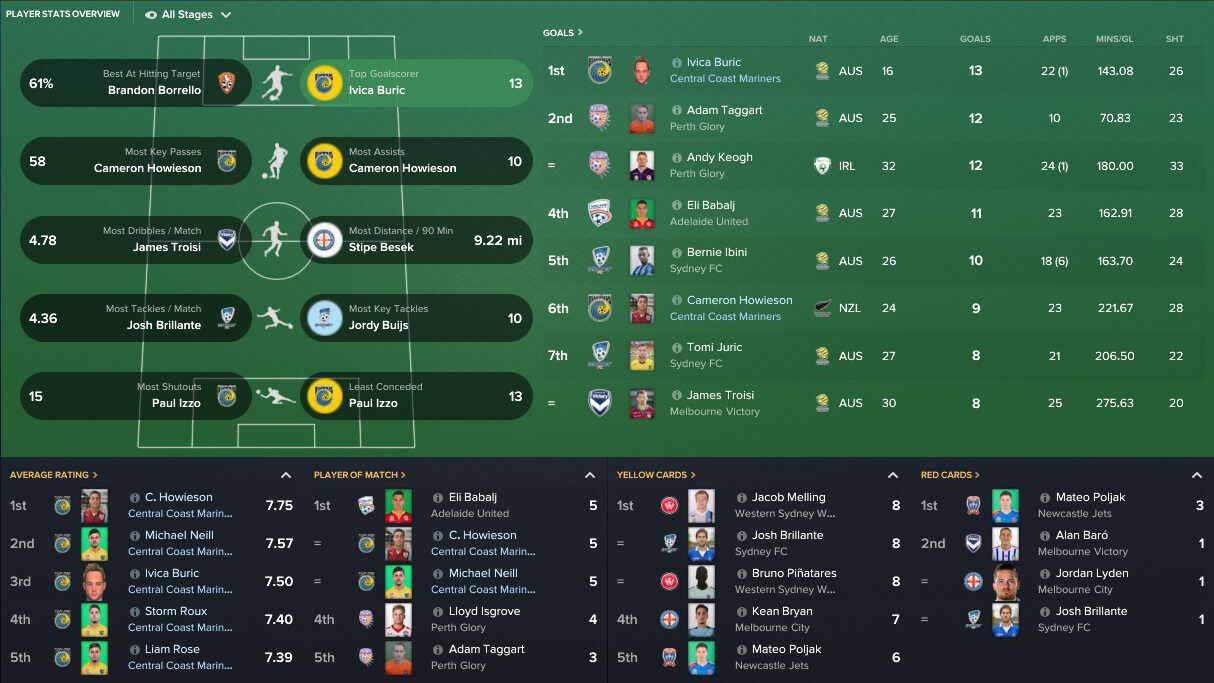 I was in charge of two international friendlies during the season, and during my first match in charge of the Socceroos, I called up Ivica Buric to the senior national team to cap him in the match against Jordan. He was playing as well as the senior players while on that youth contract, and like I said in the previous post, I was determined to call up him and Ozcan Gunes to the national team someday.

I am happy to report that young Ivica is developing nicely and performing far beyond my expectations, given his young age.

He scored in the Champions League, he’s scored many times in the regular season, and as you see, from his two caps for Australia, he returned a goal as well. He’s improving nicely on his physicals, and his mentals have been on the climb as well. His determination, in particular, is on the climb, jumping from 6 to 11 under the tutelage of Rhys Williams, his mentor for the season.

He’s certainly going to develop into an Australian star at this rate. He’s outperforming many players in the league, and will definitely be featuring regularly in the national team if he continues to develop over the next coming years like this. 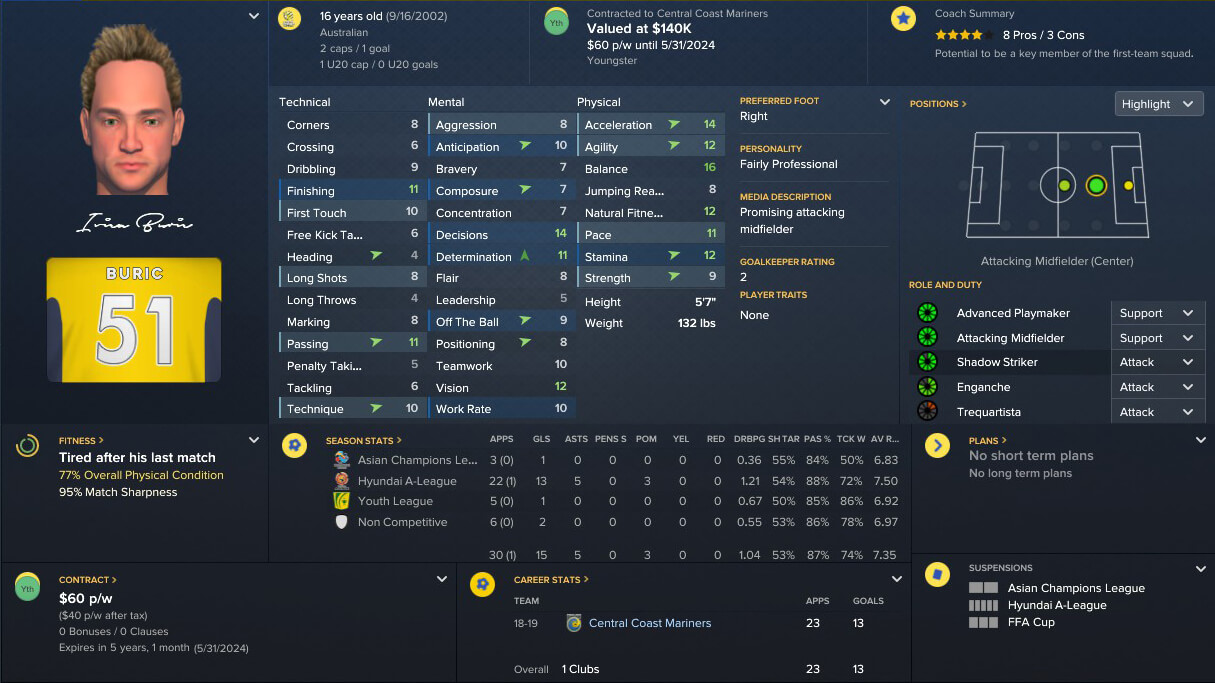 Ozcan Gunes, my other promising attacking midfielder and one of the stars of the show, has been absent for the second half of the season. He wanted a new deal on professional terms, and I figured I’d give it to him since the wage demands were reasonable and I was way under my budget anyway. Unfortunately, there was something I overlooked! By taking a senior contract he was now supposed to be included on the team registration papers, whereas he was previously exempt from registration as a youth player. He signed that contract two months after registration closed for the second half of the season! To make up for it, I started him in each of our four Champions League group matches we played, but I had to let the youth team have him since he couldn’t play with me for the remainder of the season.

This update is shorter than usual. There’s not much worth sharing since it was a foregone conclusion that we’d win the league with this setup. I’ll spoil things ahead of time by saying that we qualified out of the Champions League group stage with two games remaining, but I’m not going to go over the competition until the next update since the last two games will run during the Finals Series.

In the next update, I’m going to cover the scores and results for the group stage, go over the Finals Series that I expect a win from, and then I’ll cover the Second Round, which is expected to run after the Grand Final like last year.