Alright guys and girls! The first season of Slack FC – a team based on some of the FM Slack community members (see @fmsamo on twitter for more details) – has come to an end. When I left you last time (and that was a long time ago, my apologies), quite a few of Heskey’s lads had left for pastures new to further their careers – or perhaps better management. However, there’s still a good core contingent at Slack FC rapidly progressing towards the National League South title.

Can they do it? Let’s just straight into the update and find out.

4th March 2017 – we kick off the update with some good news! Slack FC have officially secured a playoff spot in the National League South. This was achieved by beating Welling United 2-0 at home with goals from Danny and Pichichi, both lads continuing their fine form. Their reward is to feature in the team of the week, and also an all expenses paid trip to Thorpe Park.

As you can see below, the lads now have 8 games left to play with an 8 point lead. Only Eastbourne Borough realistically stand in their way of a league title…

Michael Laudrup, the current manager of Burnley, has expressed keen interest in signing midfielder Joe Timms… let’s see how that one plays out.

11th March 2017 – Let’s not forget the FA Trophy, as the boys are also in the semi-final of the competition. Amazingly, Slack FC record a 3-0 home win against Gateshead. Danny and Pichichi are the pick of the players again (starting to sound like a broken record here), but a solid performance defensively prevents the away goal from happening.

A double is on the cards. Lawrence Davey has to ask what that is. How sweet.

Yeah, the squad will take to the hallowed turf of Wembley Stadium in the FA Trophy final. Despite losing 1-0 in Gateshead, the home leg result is enough to see the team through. Lincoln await in the final.

Club captain Kinna has been the subject of some transfer speculation too, this time from Everton gaffer Ronald Koeman. Lots of managers are sticking their noses in to club business right now…

21st March 2017 – In a crunch match at the top of the table, Eastbourne Borough and Slack FC share the spoils. Heskey rotated the squad, and with little creativity in the side, arguably a draw is a fantastic result. It’s Angel Bastardo who gets the goal for Slack as the game finishes 1-1.

25th March 2017 – …But is this causing the Slack empire to crumble? A rare defeat for the boys as they lose at home to Oxford City 2-1. Heskey makes some bizarre team selections in a much changed side and appears to have backfired.

Mr Davey has torn his knee ligaments during training, and will be out for 3 months. Davey has been a rock in the heart of the defence this season, and we wish him a speedy recovery. Will this affect his chances of a transfer in the summer?

Winger John Goddard is also out for 5 weeks. Not now… not right at the end of the season. Is this it for the

Bouncing back from a rough week, Slack absolutely dominated Hemel Hempstead Town to keep their league dream alive. Mike Pearson gets a rare goal as they win 3-0, making it four wins in the last five home games.

Danny, Stuart Reid and Pichichi are all being considered for the National League South Player of the Season award.

9th April 2017 – Midfielder Adam Pengelly has caught the eye of Eddie Howe and Tony Pulis. Pengelly is said to have found the news DELIGHTFUL.

15th April 2017 – A huge win for Slack! For some reason, the boys were extremely up for this one. Perhaps it’s the lure of the league title, or perhaps it was Heskey promising to take them all out to Nandos after the game, but Slack run rampant over Hampton and Richmond Borough.

Pichichi achieves a 10.0 rating for this match due to his hat trick as he helps the team win 4-1. Everyone apart from goalkeeper Ian McLoughlin receives a 7.0+ rating. Perhaps there’s a goalkeeper in the ranks that might be able to challenge McLoughlin for the number one shirt…

There’s even better news too – Eastbourne Borough lost against Bishops Stortford. Can you do the maths?

Angel Bastardo gets the extra hot sauce on his Nandos after the game after being egged on by his teammates. He fails to turn up to training the next day.

20th April 2017 – Heskey takes the squad to Wembley on a day trip. They visit Wembley Stadium to get a feel for where the FA Trophy final will take place.

It’s a bit of a nightmare outing. Ewan Beattie becomes so nervous he vomits in a bin. Keysi Rensie gets lost round the stadium. Barnet loses his phone and can’t contact his mum, and Chris Eadie and Severin Lambiel engage in a game of “odds” throughout the day resulting in the latter nearly breaking his neck jumping from the top of a staircase. 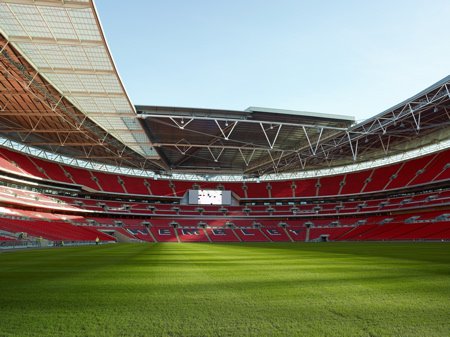 DrPoods doesn’t even go on the trip.

They’ve done it! On a warm spring afternoon in Truro, Slack sealed the National League South title in glorious fashion. A 3-0 win was enough to win the title in front of 423 spectators. Pichichi struck early on for his 18th goal of the season, whilst a young striker from the academy named Danny Barron grabs his first goal for the club.

POODSWATCH – DrPoods plays a game for Slack FC, but fails to keep a clean sheet. However, a 6.7 rating is fairly respectable at a time when players may have downed tools.

24th April 2017 – Mike Pearson has turned down a contract at Slack FC. It was Pearson that was subject of transfer speculation with Antonio Conte at the end of the last update, and Liverpool and Tottenham have also joined the chase for the young midfielder.

29th April 2017 – The season draws to a close with a 1-1 draw against Hungerford. This result keeps Hungerford in the National League South – aren’t the boys good for being nice and keeping Hungerford in the division. Nothing to note here, other than Pichichi claiming Player of the Month for April.

The final league table ended up as follows.

4th May 2017 – it’s a race against time for kinna. The skipper has picked up an abdominal strain and is set to be out for 3 weeks.

The FA Trophy final against Lincoln is on the 21st May. Will he be fit in time?

14th May 2017 – Pichichi wins the Vanarama National League South Player of the Season award. He made 32 appearances in the competition this year, scoring 19 goals and making 11 assists, with an average rating of 8.13.

There are over 25 English clubs interested in the striker. Expect to see him move on in the summer.

Despite the television cameras being present to record their first ever televised match, the occasion did not get to Heskey and his boys. Slack FC came back from a goal down to win 2-1 to lift the FA Trophy and achieve a Non-League double.

Kinna did not pass fitness tests in time to be included in the match day squad, but barnet took on leading the back line with ease. Keysi Rensie picked up man of the match in the final with 2 assists, and with Reid and full back George Williams getting the goals (in fact, Williams has 4 goals in 15 games for Slack this season). 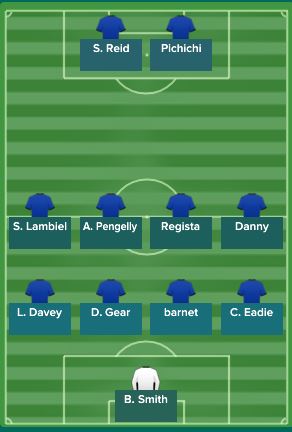 It also looks like the Slack FC board are really gearing up for league football, as they have announced plans for the construction of a new 11,000 capacity stadium, known as the Slack FC Stadium. This should be ready in time for the 2018/19 season – will the club be in League Two then?

And that brings us to the end of season one of Slack FC. Sorry this took so long but I will try to get updates out on a more regular basis from now on. It’s been a fantastic season for the team, but there is plenty of interest from clubs around the world for all of the lads in the squad. Slack FC are the name on everyone’s lips at the moment, but how long will it continue? Stay tuned to The Higher Tempo Press, and follow me on Twitter (@registafm) to find out when the next instalment of Slack FC is released.

Until then, take it easy and be champions.