Home Football Manager 17 FM Stories The Land Down Under

Hello, Tempo readers! Allow me to give a quick introduction before we begin my inaugural post on Tempo and my professional debut for the team starts in earnest. My name is Damon, and I’m a 24-year-old American soccer (I do want to apologize in advance for using soccer and football interchangeably) fan who’s been playing since FM14. I got into the series more out of my love of management sims than for anything else. I didn’t know a thing about the sport and was learning on the fly how to play because I wanted to get the most out of this unique game about the management aspect of a sports team, and needless to say, I have a new addiction! It was a blast learning how big the sport was and how it was a lot more international and connected than I thought, being used to our strictly domestic major national leagues, and I pretty quickly came to appreciate the game was a lot more than just people running around kicking a ball with no effort or skill needed. Serves me right for being an ignorant American, I guess!

If you want to get to know me better, I am on the FM Slack as @EricSnowmane, but it’s time to move onto the meat of the post. With Chris’ Islanders series serving as the exception, there’s not a lot of coverage for the other end of the world in Football Manager on the blog, with Europe being where the core of the posts are from. I happen to love managing in different leagues, so I approached Chris and was invited to come along to write a series about the Australian A-League. I’ve got some experience in the league from Football Manager 2015 where I spent a half-decade or so at the helm of Sydney FC, so this series will be part story/part tutorial about the unique aspects of management in the A-League with the hope that I can influence some players to try managing our antipodean brethren. 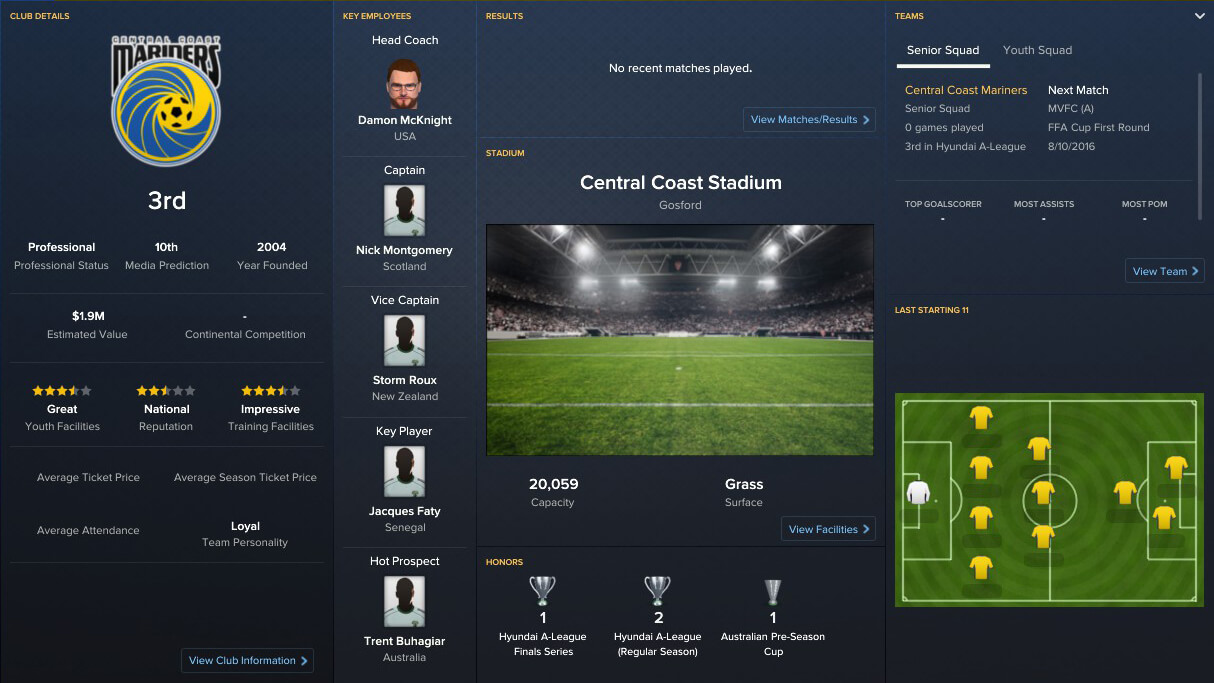 For this series, I’ve taken charge of the Central Coast Mariners, who are predicted to finish last in the league. This post will give a brief introduction to the competition format for the A-League, and the future posts will get into the team itself, scouting, and competition in the A-League.

Similar to the United States’ Major League Soccer, the league is a closed set of franchises. There are ten teams that compete in the league – nine from Australia and Wellington Phoenix from New Zealand. Australia is part of the Asian Football Confederation and the nine Australian teams can compete for slots in the AFC Champions League, with the New Zealand-based Phoenix ineligible for the competition since they’re not based in Australia.

The league competition is set up very similar to Major League Soccer too. Each team plays each other three times for a total of 27 regular season matches, with the winner of the regular season dubbed the Premier. After that, the top six clubs enter into the Finals Series, a knock-out competition where the winner is declared Champion of the A-League Season.

There is also one cup competition, the Football Federation Australia Cup (FFA Cup) that serves as an equivalent to the FA Cup for the Australian teams to compete for.

Transfers are in some ways similar to Major League Soccer, but in a lot of ways are a lot more traditional. The teams compete under a salary cap of AU$2.6m ($50,000 per week), though exceptions exist for Marquee Players, the Australian equivalent of a Designated Player.

There is no draft system in place and there are no trades, with the transfer set-up being a lot more European in nature. Each team has a transfer fund from the board, and they can sign in players or bring in youth from the team’s academy. Similar to MLS, this is a fairly balanced and competitive league domestically, with any team capable of either doing really well or really poorly in any given season based on who they sign and how they play them.

There are a couple of things to keep in mind for squad registration, however. There is a minimum requirement of fifteen players per team and a maximum of twenty-three players per team, with a reserve goalkeeper required for the bench on match day. With an emphasis in the league for the development of Australian talent, there’s a maximum of five foreign players in the team during the competition, and teams can not directly purchase players from other teams in the division. There are only two Marquee players allowed per team, with the board alone being able to make the determination of whether or not a player can take on a Marquee contract. It’s not something you can select on your own in contract negotiations.

In practice, the rules for transfers in the league meant that during my Sydney FC tenure two years ago and during my Central Coast Mariners stay, most of my scouting will be for Australians playing abroad who have developed in bigger competitions to bring their reputation back to the league, and for players who are in the lower regional leagues that look promising to bring up to the A-League. Otherwise, as I’ll usually do in a Football Manager save, I’ll look towards my own academy players to find promising targets to bring up into the senior team for development.

I think I’ve got the core rules touched on now, at least briefly, so I’ll lay out my objectives for the next couple of seasons:

(1) I want to build up the Mariners team to consistently compete for the Premier and Champion spots and eventually for international competition in the Champions League. As far as club development, I want to develop my own academy players and improve my facilities to allow me to bleed in my own players and train them to an elite level to compete domestically or abroad, with the top players eventually earning spots with the Australian National Team.

(2) For a secondary, long-term objective, I’d like to eventually assume control of the Socceroos as the head coach to try my hand at international management.

The goal here is to teach you, readers, how the A-League works and to see how I can raise the stature of Australian clubs and players.

I’ll touch in more detail on events related to the management of my team and the competitions in the future as they come up, but this post was meant more to give the briefest overview before moving into the series proper.

In the next post, I’ll review the team in more detail and we’ll start scouting for potential talent to bring into the team ahead of the regular season.