Welcome back to the Spin-Off Story where the summer of 2021 sees big Mohamed Yattara take over at Hertha Berlin (if you hadn’t already guessed from the title).

[For those who aren’t regular readers of *shameless plug alert* my FM stuff on my own blog (The Long Ball), Mohamed Yattara was an unexpected goalscoring machine for Osasuna who was only stopped by the implosion of a Toshiba laptop.] 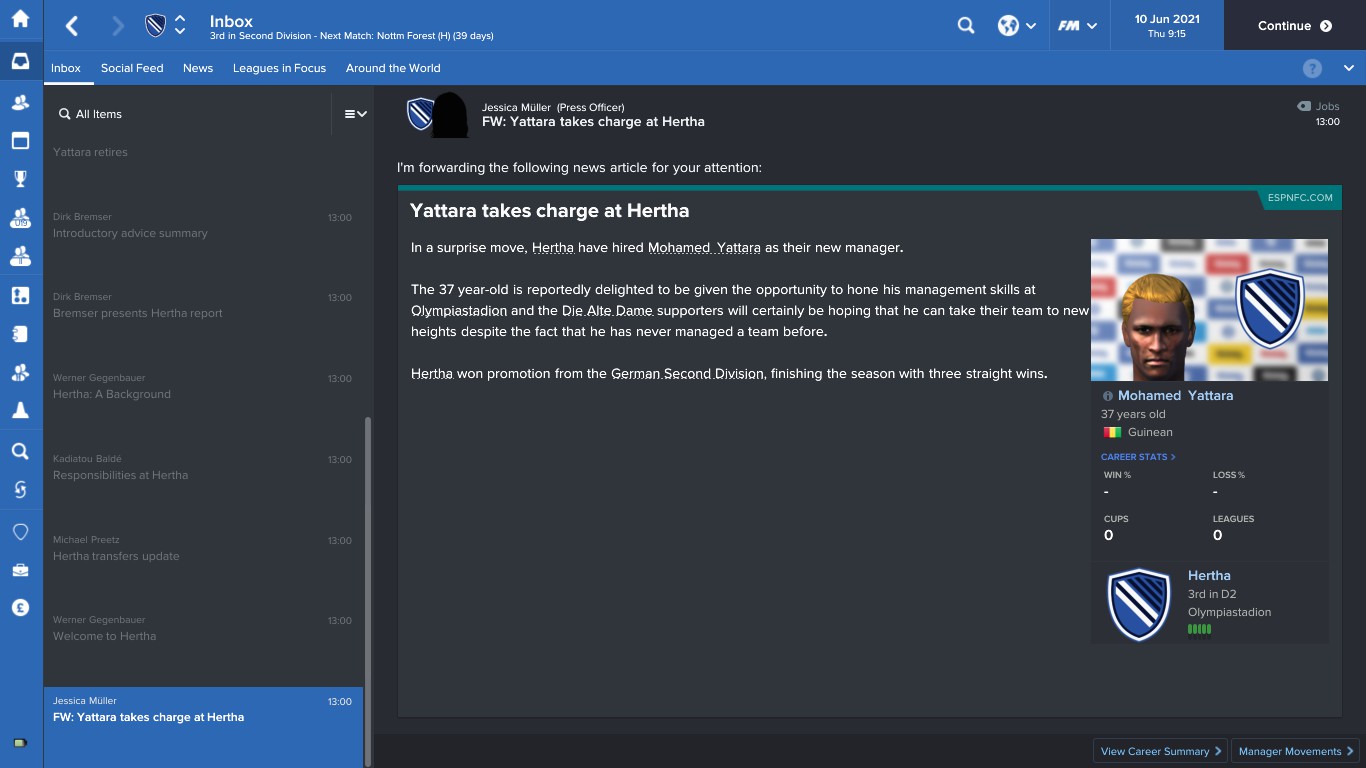 Just like in the in-game Hertha surged from nowhere to eventually take the glory from a virtual despondent Bolton and Lille. I was preparing myself for a move to France in all honesty but the rise of Hertha was a pleasant surprise.

What wasn’t a pleasant surprise was the balance of their squad. Quite how they got promoted with one natural senior centre back is commendable although the lack of central midfielders was curious though. That being said, there was £25 million to play with and some very sell-able assets to shunt out the door. At this point, I would show you the actual squad up to date but I don’t think that far ahead so no dice.

I did play up until the start of July and there has been a couple of bits of business. On the outs, we had the usual spate of releases leaving the club with notable names including Swiss defender Fabian Lustenberger after 14 years at Hertha and former Bayern man Sinan Kurt who had lit up the fourth tier in the reserves.

Coming in then was a familiar face for readers of the Salernitana Story – Shaqir Tafa. Yes, I know, I’m not going to sign every player that I managed in Salerno but I will be tempted to bring in the ones I know are reliable and quality. And Tafa is just that with over 150 games under his belt and experience in Serie A meaning his £2.2 million price tag was a bargain.

Then, before I decided to write this, clubs in Germany released players and look at who popped up without a club… 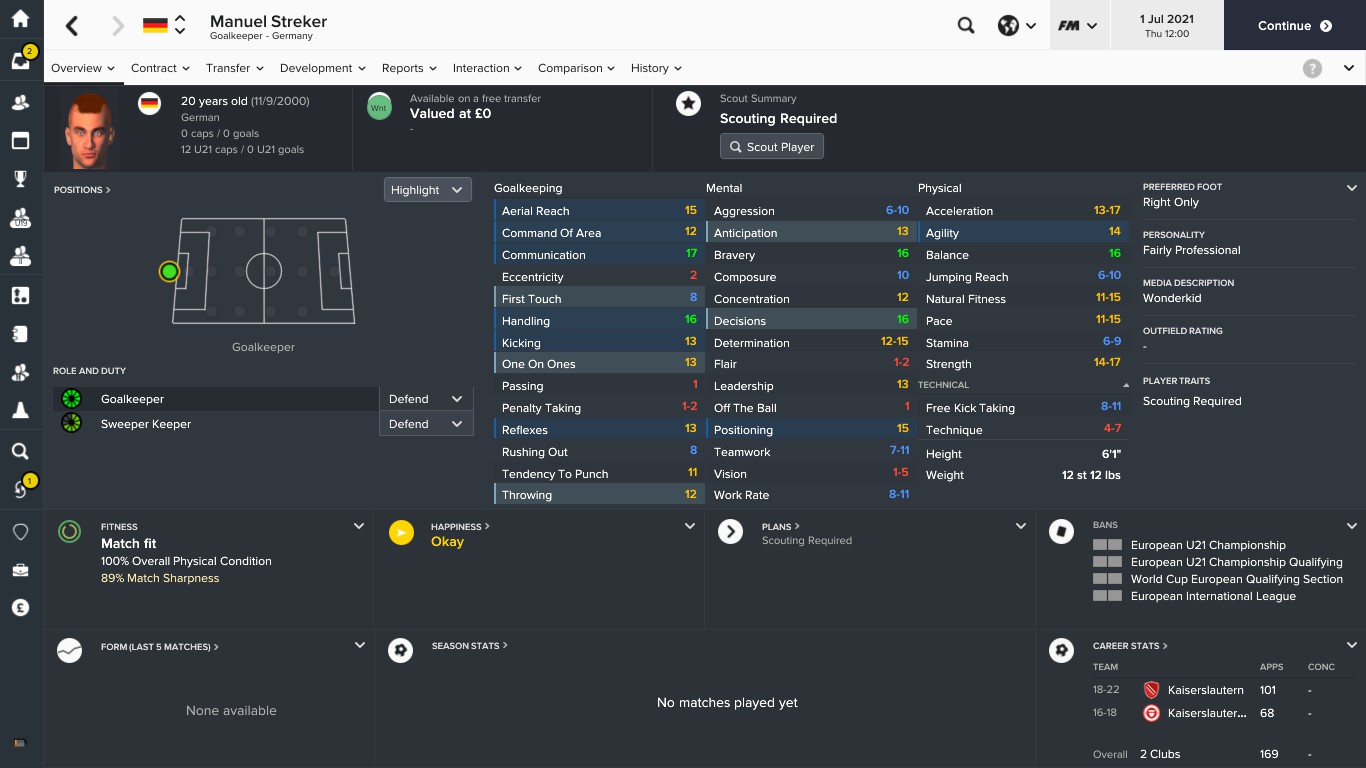 Oh. My. Word. I have seen some things but that is a new one for me. A wonderkid free agent is not something that comes along every day so I’ve already jumped in with a contract offer. Annoyingly other (slightly better) clubs have followed suit but I’m hope… 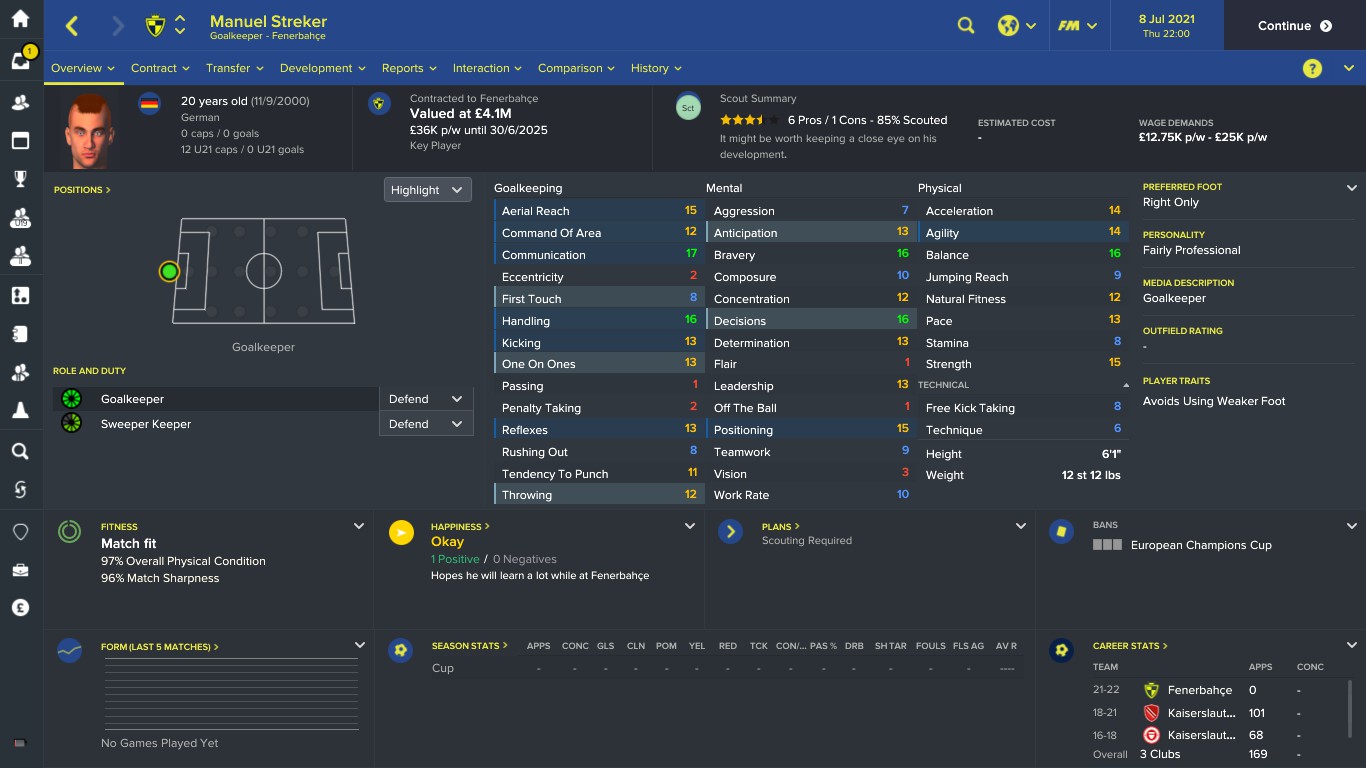 Sike! Stupid Fenerbahce and their successfulness. He does have a release clause though so I may be tempted if we stay up/do well this season.

Anyway, that’s about all I can really say for now. I can tease you for the next part by saying I’ve been on a hunting mission for the standard ridiculous regens and found some brilliant ones, even signing a couple. Plus there’s another familiar Salernitana face. But mostly come for the regens, they’re quite good.

Until next time, don’t forget that Manuel Streker is the enemy.