In Part 2, I showcased my criteria for players in every position. In this piece, I hope to give you a better idea of what I’m hoping to accomplish tactically. As I’ve previously stated, I am certainly no tactical genius. However, I have taken Ajax to the Champions League Final in 2021 so I can’t be completely inept, can I? I guess we’ll find out together.

The board has made it very clear that they want the team to play attacking and possession-based football. This would ordinarily be a large challenge but they’ve just gone and chosen my two favourite styles of play! I love to play a pressing game on either control or attack, and I usually try to keep the ball as much as possible with whatever team I am managing.

I’ve created three individual tactics to start the save. The first one is very attacking and will be employed in home matches that we’re favoured in or against smaller sides. The second will be used to take on the giants of the Premier League and Europe and is quite a bit more conservative than the first tactic. Finally, the third tactic is a wild card; I will likely be using it to experiment with different formations as the story moves on, having it in my back pocket in case my other tactics fail me. 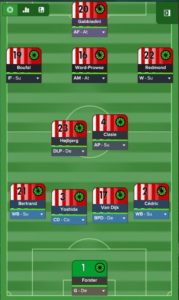 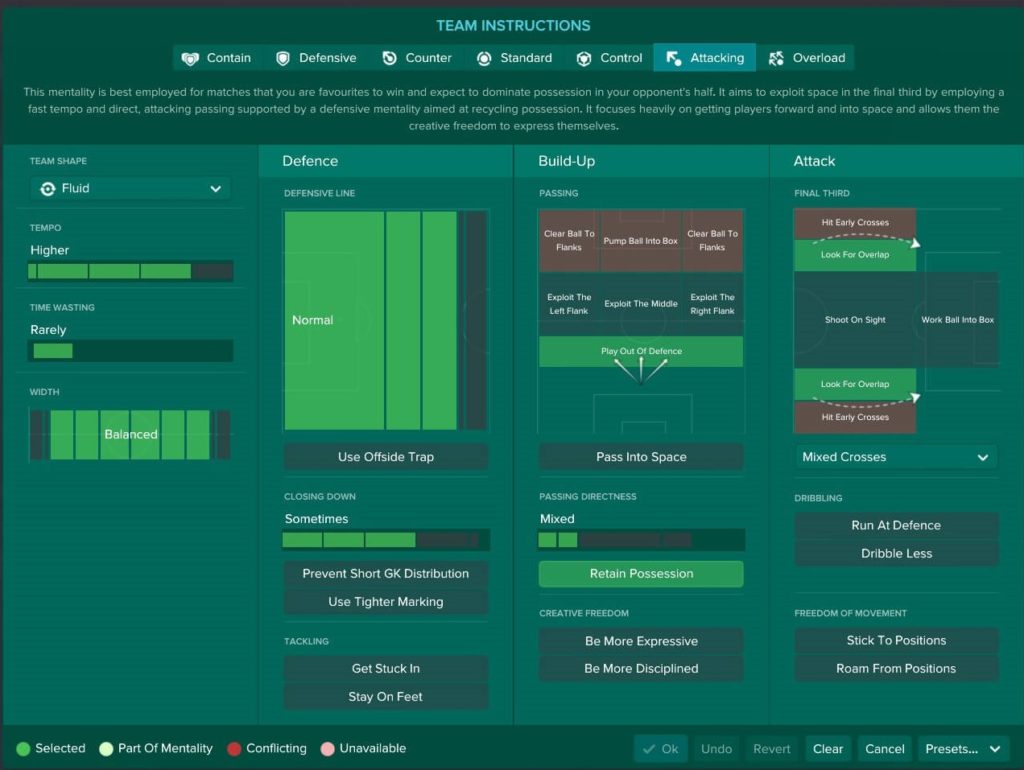 I call this the Ajax formation because it is what I’ve used for so many years on FM with my favourite club to manage. It has no defensive midfielder because I’m trying to basically suffocate the opponent in their half. Because it’s so attacking, I decided not to put close down more or tight marking on, but that is subject to change (as is everything). I went for pretty minimal instructions, as you can see: higher tempo, retain possession, play out from the back, and look for the overlap. I hope this tactic will see us overcome some of England’s slightly smaller clubs. 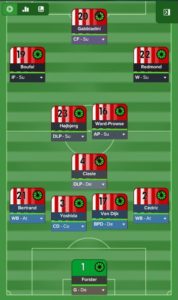 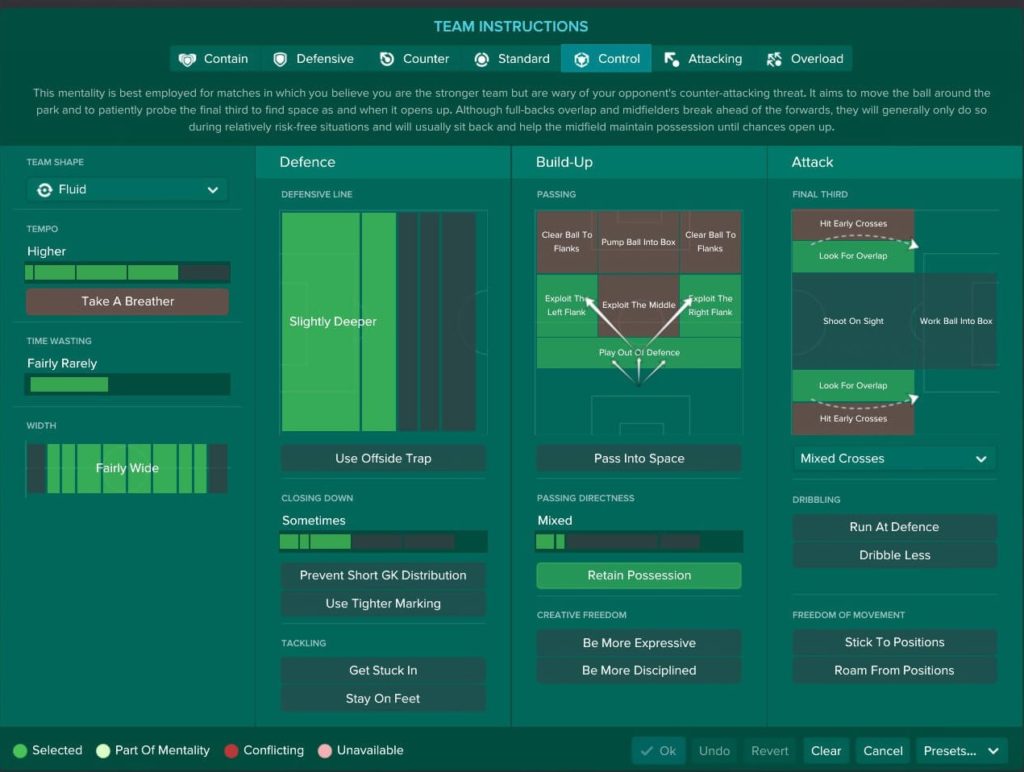 This is another tactic I’ve used with Ajax before. I kept all of the previous instructions from the first tactic but added: exploit the flank (to make use of the attacking wingbacks), slightly deeper defensive line, and fairly wide width. My thinking is that we will force the play wider to try and create openings in the opposition when coming up against more favoured sides. I may even look to play on attacking instead of control with this formation in the future, but for now, I’ve kept it conservative. 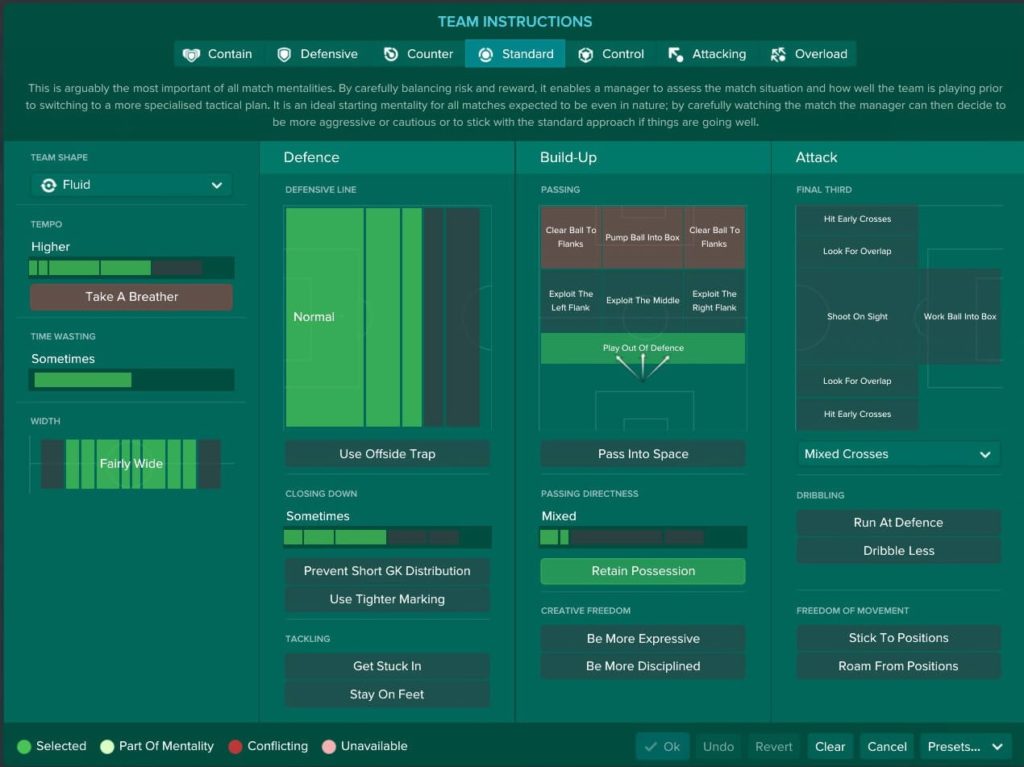 Ah, the standard 4-4-2. I’ve never had much success with it before but I put it in as my experimental tactic because of how many good strikers we have. When compared to Tactic 1, I took off ‘look for the overlap’ and added ‘play fairly wide’. If you haven’t noticed by now, my constant instructions are to keep possession, play out of defence, and higher tempo. I feel that these are crucial to the possession-maintaining, highly attacking philosophies that I must achieve during my time at Southampton.

That’s it for now. I don’t want to expand too greatly on these tactics because they are subject to change; I’ve already tinkered around with all of them throughout the beginning of the season. Next update, we’ll delve inside the Black Box itself. What’s inside it, and how will I use it for my transfers?

As always, you can contact me on Twitter @adiek22. I’ll be happy to answer any questions you have. Thanks for reading and go on Southampton!