….but that’s alright, hey? Well, it’s the way it’s going right now so I am going to run with it. Yesterday’s game time was a lot of fun for the most part and, importantly, pretty damn successful.

Catch up on all of the series so far here

That’s if you call getting promoted six games before the end of the season successful, of course. 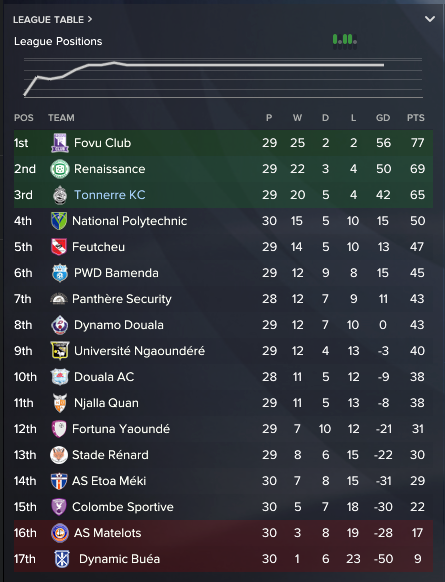 Yeah, we did it and if we had managed to beat Renaissance in the last match of the evening we might have been able to pinch second from them. Three games to go, I cannot see them dropping four points.

But, I still say that promotion might be as much of a curse as it is a blessing. My team are young, raw and only have one lap of professional football run in their race of a career. OK, a couple of the lads have been around a couple more times, but having taken a bit of a look at some of the Elite I sides, there are some experienced boys in that division. We might be lambs to the slaughter, which poses the obvious question around recruitment – do I change my policy?

Now, the immediate answer is NO of course – we laid out some ground rules at the start. But, if you look at this like you would a business, you need to have the ability and agility to adapt when things change, otherwise you might get swallowed up and disappear. A confidence destroying relegation battle might scar some of my young talent before they’ve got going. The board might lose faith in me long term and give me the boot. Getting beaten every week, if indeed that were to be the case, might see fans stop coming to the ground. So, would it not make sense to bring in some more experienced heads?

On the flip side of the same coin, bringing in a few late-20’s, early-to-mid-30’s doesn’t guarantee that we will stay up anyway. Plus, if I manage to keep the squad intact over the winter, who would they replace? By dropping anyone from the team that has defied the odds in going straight up, I would be undermining the policies of the club – building the future. What if players do move on over the winter, though? I kinda took an FM vow that if anyone moved on, the first place I would look for a replacement would be the subs bench or the team below, so I should honour that. Now, if I feel that none of the potential replacements are ready, that is different. There is no point sticking to principles and making us weak. So, with that in mind, I need to spend some time when the season ends looking at where we are weak (if I were to lose our first choice player in that position) and then see if there are any potential external solutions that may become available to me.

There will no doubt be some change at the end of the season. I would imagine the club will turn professional, which will mean everyone at the club needing to move on to a full-time contract. My initial thoughts around that would be to run some analysis on each player and grade them A-B-C.

I’m already running the kind of analysis I will do in my head – thanks to fmfutbolmanager in Slack, I learned how to print screen and export into an excel sheet the other week, so I can finally quickly do all the things I love doing at the end of the season – build a proper profile of what good looks like when the team is playing well. Next season will be tougher, so to have some stats to mind that show me what numbers we were hitting when we were winning will help me have a clear idea of where the gaps are when struggling. It can also be used in the recruitment. Hell, I’ll probably chuck in some radars too, as they are fun if not a little time consuming.

Anyway, back to the fact we got promoted.

Marcelin Zeutsa continued his electric form, netting 21 in 17 starts before breaking his ankle – he will miss the start of next season.

Fortunately, Landry has continued scoring, also with 21 beside his name to date.

Halilou Abdel Latif has got his shirt back and has 11 in 14 starts.

And, of course, if these boys don’t keep scoring I have Dibs and Marko in the junior sides who have scored well over 120 goals between them this season, so they are always pushing for the first team squad.

Promotion was cool, but my proudest moment of the season so far was leading the U18 team to their cup final. We played three Elite I U18 sides along the way, beating the favourites in the semi-final 2-1, having been a goal down. Sadly, our luck ran out in the final when Union Doula beat us 2-1. Still, it was a fine effort.

We had our first Youth Intake – there appear to be a few decent prospects in there, but I will talk more about them at the end of the season when I do some analysis. My gut feeling is purely based on attributes, and I hate judging a player purely on attributes. Hopefully they’ll get some game time in the U18’s between now and the end of the season and I’ll form a better opinion. The U18’s sit a very comfortable second in their league with four games to go.

Financially, we are going from strength to strength still, over €250,000 in the bank which is going to mean a bit of a tax-bill at the end of the season unless I can persuade the board to spend some of it on facilities. However, I cannot see that happening.

So, a handful of games to go and then the real work starts. What happens between now and the start of next season will set a the framework and templates for longer term success at Tonnerre.

Stick with me guys, this is going to be fun – oh, and if you have any questions on how I do things in the save, things you’d like me to write about in more detail, drop me a line.