It turns out that the first seven games of the MTN Elite II have been rather good to us. 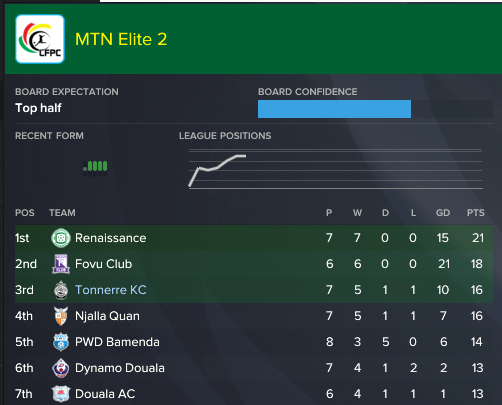 Considering Renaissance and Fovu Club are the clear favourites for the title, I am very pleased we have made such a good start – our one single defeat being on the opening day to Fovu.

The squad is settling down nicely.

Seven games is about enough to start forming some opinions. So far I have learned:

Early days, obviously, but I am keeping a close on Mbondi’s progress. The two AM’s are pleasing me so far and the goals the back-up strikers are scoring are insane, so it is good to know we have cover there as well. The U21’s sit 5th in their league and the U18’s sit 3rd. So far, so good.

In terms of training, I am doing everything as I am the only member of staff at the club bar my Chief Scout.

We are set-up in my usual way – fitness/low and then each player on an individual training scheme. When it is a young player, I always choose the player role that touches the most attributes, regardless of what role they actually play in a match – a good example would be I will always train a young DM or CM as a roaming playmaker as it covers everything, and then I add in tackling as well. I am sure some of the FM gods would disagree, but I have noticed over many, many hours of playing that I get far less injuries and players improve their attributes by having this training set-up.

Scouting wise – well, the Chief Scout is covering Cameroon but, realistically, he is only there so I have someone to do some targeted scouting when the time comes. Unless we lose people in the next transfer window, which is unlikely, he will really come into play when I start to analyse some stats towards the end of the season and identify young targets that have already been playing or identify young targets who are likely to be released by bigger clubs. However, the squad has a nice balance of players right now that need time to mature, so I will not be making too many external signings – time and investment is going into the youth coaching set-up.

Seven matches in and I am happy. However, we have another twenty-seven league games to go, so being third now means very little indeed. It’s going to be a long season of development for us at Tonnerre.