The first week of November and we are in FA Cup action. Wycombe Wanderers are our opposition in what is the first round proper. The week leading up to the game began like any other normal week. Training on the Tuesday followed by the Thursday session in which we get down to the nitty gritty of the opposition, except this time there was a slight drama. Having sent Meady down to check out Wycombe, I asked Jake how he thinks we should set up. I was already thinking of keeping the same system which is bringing us luck in the league, but Wycombe are a well drilled League Two side. Jake is looking rather puzzled at this point, its a shame really as I kinda like the fella but unfortunately it seems he hasn’t quite got the tactical know-how, to take us to where we want to be.

I call Jake into the office and decide to offer him a settlement on his contract, which he duly takes, and so my next task is to wish him well and set about finding a decent number two, one who can add a bit of spark to the backroom team.

For 78 minutes I thought the magic of the FA Cup was going to shine on us. Miller, with the neat finish from a half cleared corner just before half time, saw us in a good place. With just over ten minutes on the clock, Wycombe’s full time fitness showed, and they managed to save the tie. A 1-1 draw away from home is a decent result, Jim is already rubbing his hands at the prospect of a money spinning replay.

The response from the advert for the vacant Assistant position takes a turn for the better. My phone rings and I notice the caller is calling from Norway. Brede Hangeland, ex Fulham, Crystal Palace and recently retired centre half, calls to say he is very interested in the position. We chat briefly and it seems he is looking to further his coaching career, and where better to start than Crabble. Brede, is due to fly in tomorrow.

The trip to Solihull Moors was as uninspiring as the weather. A drab contest in which I felt a 2-1 scoreline slightly flattered us a little, although I am certainly not complaining. Three Points and no injuries, I will settle for that even if the performance was of Sunday League level.

Hangeland is enthusiastic and energetic on his arrival at the office. Mind you, he soon changed his tune half hour after being in the meeting room. That reminds me, I really need to order some Febreeze. His experience at both Premier League and International level, will be invaluable to the club.

Over 3,000 punters, made their way inside Crabble for our cup replay. Some of the players must have had stage fright as they misplaced pass after pass in front of the biggest crowd of the season. Wycombe were well organised and despite us scoring in the last five minutes, never really looked like being beaten. We exit the cup, dreams all but faded, the 2-1 defeat will wrangle with me for a while as I believe we could of turned them over. Brede was meticulous in his approach to the game. Opposition players scouted and each player given set instructions. We will do well to hold on to him for long. We still have the FA Trophy to play for, I expect the team to really challenge for this trophy as I believe we have a great chance of winning it.

Guisely have been playing well above expectations in the league, as have we, and visit Crabble. I tell the boys that although the cup was a decent performance, the league is our bread and butter. To Ricky Miller, its his bread, butter and dessert. Everything he touches goes into the net. A hat trick in a 4-1 victory, secures another three points for the ever impressive forward. 22 goals in all competitions and we aren’t even half way through the season yet.

The end of the month sees us play three games in a week, due to the FA Cup replay over taking one of our fixtures. Something or a rarity happened during a Dover game, a 0-0 draw. Woking battled hard for their point and poor finishing, for the second time this season, cost us.

Two away games against Macclesfield and Sutton United, respectively, ends November for us. Parky, is shown red for a horror tackle away at Macclesfield, but a lone Miller goal, is enough to see us through. Worse was to come though as Miller limps off in the dying second. Further inspection on the coach home is that he will miss the Sutton game, but thats all.

Remember the home match against Sutton, earlier in the season? Well I thought we was going to have a repeat performance. Chances galore, missed by a Ricky Miller less side, until Moses popped up to nick us a 1-0 win. The plastic pitch proving rather more difficult than first thought. The win was enough to send us to the top of the National League, yes you heard me right, top! We are certainly punching above our weight, being part timers, but if we can avoid the knock out blows, then maybe, just maybe, we can reach the promised land of the Football League. 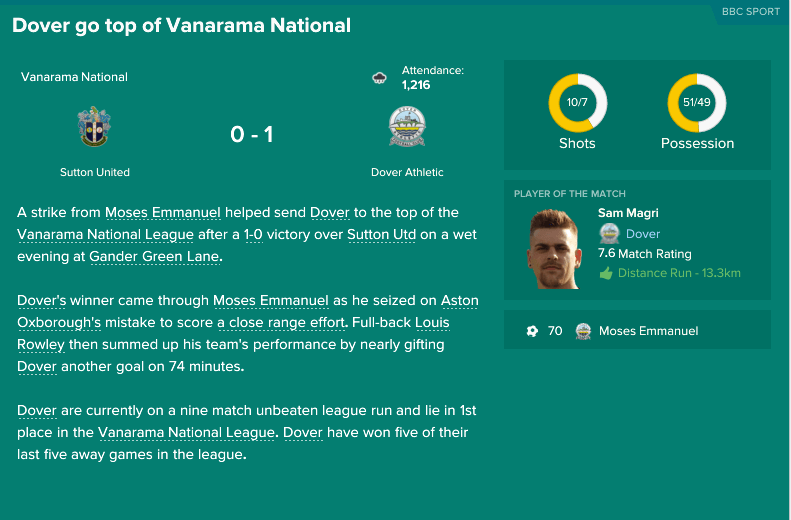