Home Football Manager 17 FM Stories The Land Down Under VII

G’day, mate! The atmosphere is buzzing around Gosford and I’m glad you’re able to get in to join us!

As you all know, we just got through the end of the regular season and finished as the season’s premier against 1000-1 odds. The season isn’t over, however! The season doesn’t end when the points are tallied up and the winner by points is decided. We have to enter into the Finals Series, a knockout competition culminating in the Grand Final that determines who the league champion is. Being champion is more important than being the premier, so we’re going to want to do our best here, naturally.

This series wouldn’t be much of a tutorial if I didn’t explain the format of the playoffs to anyone who’s unfamiliar with it, so we’ll do that before we cover the actual results.

First thing’s first, we need to take a look at the league table, since the final regular season league positions determine who are drawn together.

The top six teams compete in the Finals Series. We sit in first. Adelaide United sit in second. Melbourne Victory is third on goal difference against fourth place Perth Glory. Brisbane Roar and Sydney FC round off the top six. 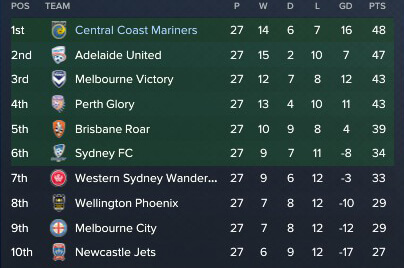 This is the Finals structure, taken right from the source at the A-League website if you want to check that out for more information.

In the first week of the playoffs, we eliminate two teams from the running. The premier and the runner-up get a bye to the semifinal, so CCM and Adelaide both sit out this week.

As we can see in the following image, Melbourne Victory will host Sydney FC and Perth Glory host Brisbane.

Victory and Glory advance while the other two are eliminated.

In the second week of the Finals Series, the premier will host the lowest ranked winner from week one, while the runner-up hosts the highest ranked.

It’s not indicated in this particular image, but we won our match against Perth and Adelaide won against Melbourne.

The drawing for slots isn’t terribly complicated to understand, so while you can’t know who wins each match until they happen, you will have an idea of who you could go up against based on your position in the league table relative to the others.

Onto the Grand Final, it’s the underdogs against the defending champions, so how did we do?

It was a pretty close result, but we used our home advantage to take a 3-2 win and secure the final trophy of the season. As the winner of the Grand Final, we’re going to finish this season as both the premier and champion of the league. We’re eligible through our accomplishment to participate in the AFC Champions League.

I am absolutely ecstatic at this result! It’s a strong finish to a season I thought would end in heartbreak.

I won’t highlight all of the awards, but there are a couple of note. With 7 goals and 8 assists, Andy K is the Young Player of the Year, despite being a January signing.

The Manager of the Year award naturally went to me, making this my first personal award as a manager.

We had a couple of players in the Team of the Season and A-League All-star XI, but not as many as I would have thought given our season.

Moving on, this is our club Team of the Season:

Paul Izzo is between the sticks as our ever-present goalkeeper. Poscoliero, McGing, and Faty are the three centre-backs. Michael Neill and Storm Roux are the wingbacks of the season. The two Liams, Walsh (on loan from Everton) and Rose are the central midfielders. Finally, Andy K, Bingham, and Ferreira are the three shadow strikers of the year. 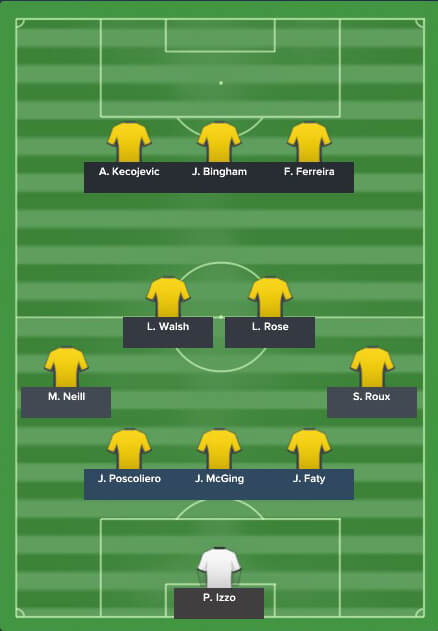 Looking at our goals for the offseason and going into the next season, we need to strengthen the squad and do our best to repeat this victory. A lot of these players, I’m willing to give second chances to. I do want aging players like Jacques Faty to hit the road so I can bring in youngsters to the squad, however. We also have a lot of registered players who saw either no playtime or just a couple of matches of playtime that will go. In the offseason, I am going to want to be moving them away from the club to find people better suited to the team who will see playtime in our formation.

This season we failed out of the FFA Cup earlier under a tactic the team wasn’t suited to. I don’t think I am being overly optimistic when I say I want to make it to the final for the FFA Cup.

In the regular season, I want to win both trophies once again. We did it once from a last place start, so we should have no difficulty starting on a strong beginning step.

We’re eligible for the AFC Champions League, as I said earlier, and that should start in the second half of the season if memory serves me right. I have no particular goals for the competition aside from working to meet whatever goals the board has in mind.

I participated in three Champions Leagues with a domestically strong Sydney FC in Football Manager 2015, and it was the one competition that I never got to win with the club. There’s going to be some good opposition in the competition, I know that for sure. Our goal, for me at least, is to be competitive with our team and see exactly how far we can go. I want to use our first run as a gauge for subsequent runs.

Curtains are down on my first A-League season, and I can’t say anything other than that it was a resounding success and that I hope the coming season builds on this to be something amazing.

We’re going to be having some great times in the Land Down Under, so I’ll be back to share the preseason with you in the future.