People enjoy playing Football Manager for different reasons, such as signing players, managing their favourite clubs or winning major trophies. Personally, I consider the tactical side of the game to be hugely rewarding, and it adds a completely different element once it’s understood thoroughly by the user. Often though, users are prone to judging the tactical aspects of the game as fruitless, unrewarding and strenuous; I think this is due to a lack of understanding. Frustration can easily develop in a user’s mind after spending endless hours building a tactic only to discover that once it’s used, it doesn’t work.

From what I perceive, one of the most common flaws and frustrations in users that struggle to build their own successful tactic is balance. Balance, is defined in the dictionary as:

‘An even distribution of weight enabling something to remain upright and steady.’

Obviously this is too general, so in order to adapt this standard definition to relate to Football Manager, I propose replacing the word ‘weight’ with ‘mentality and positioning’. So my FM adaptation of the generic definition of balance would be as follows:

‘An even distribution of mentality & positioning enabling a team to remain upright and steady.’

Overall, tactical balance is primarily about stability; having a setup that allows your team to attack, defend and transition at relatively equal measure without overloading in one of those areas.

Tactical balance in FM17 relates to a number of aspects, including basic common sense, but the two I’m going to focus on are mentality and positioning. Regarding positioning, this refers to the formation of your tactic; where your players will be with and without the ball. Secondly, mentality refers to the roles and duties of your players within your formation; their primary intent on the pitch and what they’ll seek to influence.

I should probably point out that I don’t know who created the tactics that I’ve featured so apologies if yours is one of the negative examples. 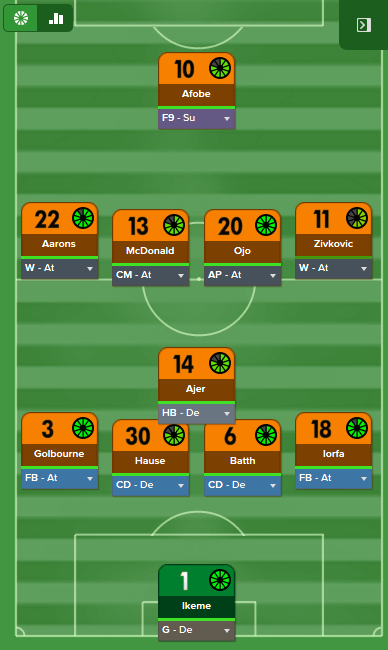 Example #1 is unbalanced. In terms of the formation, there’s no issue, as it’s a fairly common 4-1-4-1 setup. However, when focusing on the roles and duties, the problems become apparent. Regarding duties, this tactic features six players on attack duty, including the whole of the midfield, with not a single player on support duty except for the lone striker. If you portray this concept in real-world terms, imagine every player in a four-man midfield running forward and being exclusively interested in attacking, without any primary thought as to what might happen if the ball is lost. Also, both FBs are on attack duty, thus shifting their focus to influence the game in more attacking areas alongside the wingers, meaning the tactic is providing virtually no cover on the flanks. Regarding the roles, I’d be able to question a few but I’m going to focus on two to keep my analysis brief. I’d firstly question the Half-Back, as if all four midfielders are marauding forward on attack duty, surely you’d benefit more from having a player who’d try to manage that space? Rather than having a HB who is going to slot deeper and almost act as a third CB. Secondly, I’d have an issue with the wingers and the FBs working together, as having all of them on attack would result in them striving to operate in the same space, provide the same crosses and aiming to hug the same touchline. 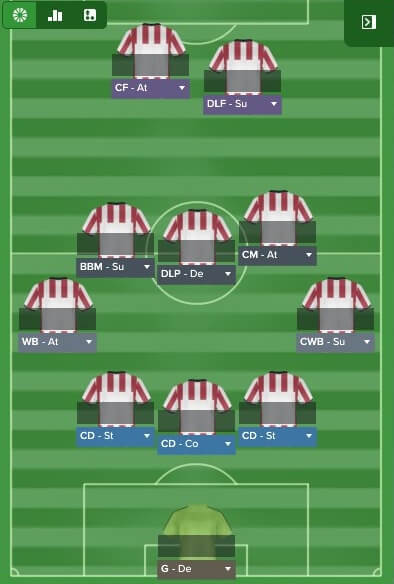 Example #2 is balanced. In terms of the formation, it’s again fairly common as it’s basically a 5-3-2, so that’s fine. The roles and duties are quite complex but compensate each another very well, resulting in the tactic having a solid overall balance. Firstly, the tactic incorporates two more aggressive CBs on stopper duty, with the central CB on cover duty to sweep up any through-balls that the other two CBs miss. Secondly, if you separate the left and right side of the pitch, the tactic allow the team to attack equally on both sides but in different ways. On the left side, the tactic encourages the WB to get forward with an attack duty, but compensates that attacking mentality with the midfielder who’s also on that side; a BBM operating on a support duty who’ll therefore be able to provide cover should it be needed. On the right side of the pitch, the tactic instead utilises the attacking prowess of the CM, as this player is on attack duty and will therefore get forward. This attacking CM is compensated by the CWB and the striker on the same side of the pitch, as the CWB on support duty will provide sufficient cover, and the DLF will drop deeper on support duty allowing the CM to run beyond and make those penetrating runs. 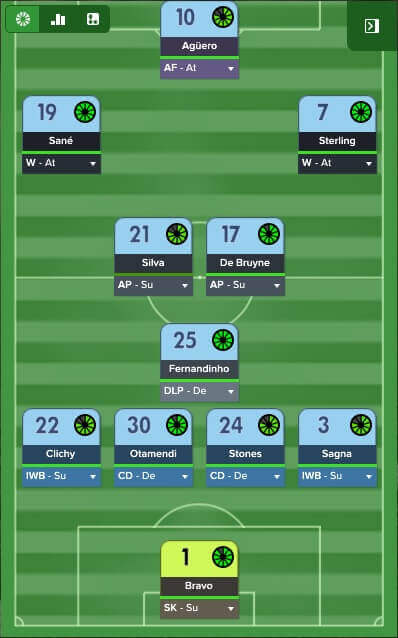 Example #3 is balanced. Some of you may recognise this tactic, as it’s one of my own that I’ve previously written about; a recreation of Pep Guardiola’s tactic at Manchester City. Firstly, the defensive shape of the tactic is a 4-3-3 with a DM, which is widely accepted as modern and stable. Regarding the roles, each one collaborates extremely well, by working to form a completely different shape with the ball to the shape that’s picture above. When in possession, the IWBs slot in centrally to allow the APs to move forward and operate in the vacant space between the two wingers with safety knowing that the DLP on defend duty and two IWBs are behind them providing protection; the graphic below represents this with the average positions of my players.

An easy mistake to make would’ve been to place the APs on attack duty because I obviously want them to attack, but doing so would’ve slightly unbalanced the tactic and made it vulnerable, as too many players would have too much attacking intent. The main attacking weapon of this tactic is crosses, so the two wingers are on attack duty so that they have the mentality to penetrate from wide areas, and as the IWBs are on support, they won’t occupy the space that they wingers want to operate in.

When developing your own tactic, it’s not going to be effective over the long-term unless you achieve balance and stability. If your tactic is inconsistent and works well against some teams, but awfully against others; it’s probably unbalanced. To provide some generic guidance for FM users who struggle to achieve the desired balance, I’ve formulated a few basic steps to keep things simple.

To conclude, there are many elements within the tactics creator that influence balance, but the two most common that people struggle with and arguably the most important in my perception, are mentality and positioning.

A tactic that is unbalanced will overcommit to attacking or defending, and ultimately will not work long-term because of the flaws in the setup, which can often leave users frustrated and confused.

A tactic that is balanced will compensate and manage itself well both with and without the ball; it’ll have an even distribution of mentality spread around the team through player roles, positions and duties.

Hopefully, with the demonstrations and steps I’ve provided, users reading this will now have a better understanding of what balance is, and how to achieve it.

Follow me at @DistanceCovered on Twitter for more, and if you’ve got any questions or queries please don’t hesitate to ask for assistance.