The build up to this match was dominated by the talk of Reading FC having the chance to win the Champions League for a sixth time in a row. Considering no side had managed to retain the trophy in the modern era this accomplishment would be all the more incredible.

The turnaround in fortunes for Reading on the pitch revolves around long serving attacking duo Danny Loader and Liam Kelly with the two English forwards having spent their career at the club as their performances have impressed consistently over the years.

Manager Keysie Rensie deserves the credit for turning what was a ‘good’ Championship level club when he took over in to one of the most dominant sides that European football has even seen.

This match saw the side from England installed as clear favourites from the end of the semi final fixtures with opponents Paris St Germain facing an uphill battle despite their significant spending power.

The biggest question facing the French side was whether they could find a way to negate the threat that Reading posed in the central areas through the aforementioned Kelly and Loader. 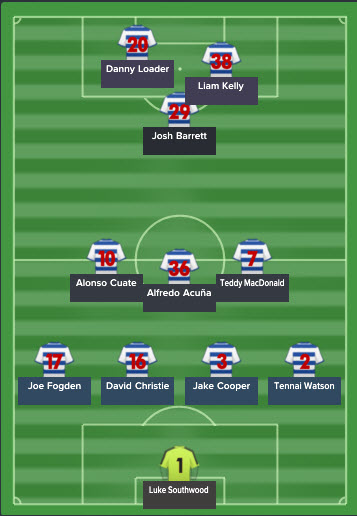 The Reading side for the final provided little in the way of surprises with Luke Southwood continuing his storybook rise from League Two to the Champions league in goal for the English side. The midfield for Reading had something of a Latin feel with Alfredo Acuna performing the more defensive role at the centre of the narrow three man midfield whilst Alonso Cuate is giving more creative freedom to attack down the left sided half space to link in with the forward players and Joe Fogden attacking from left back.

The key to the attacking gameplan for Reading however remains their attacking threat with Danny Loader and Liam Kelly joined by Josh Barrett attacking from a deeper central position. 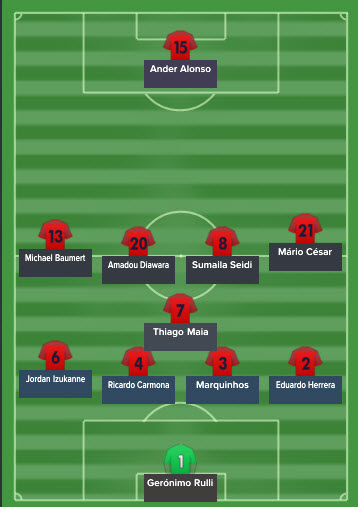 The French side chose to adopt a remarkably defensive shape to start this match with their focus obviously firmly on negating the attacking threat of Reading.

Their deep 4-1-4-1 system would see limited service and support for Ander Alonso in the lone striker role. In midfield the continued presence of Amadou Diawara and Thiago Maia would at least provide the opportunity for creativity in the central areas but it remained to be seen whether PSG could translate this deep creativity in to attacking opportunities.

The early stages of the match were dominated by Reading as they pressed PSG back in to their own half and enjoyed the numerical superiority in the centre of the field. 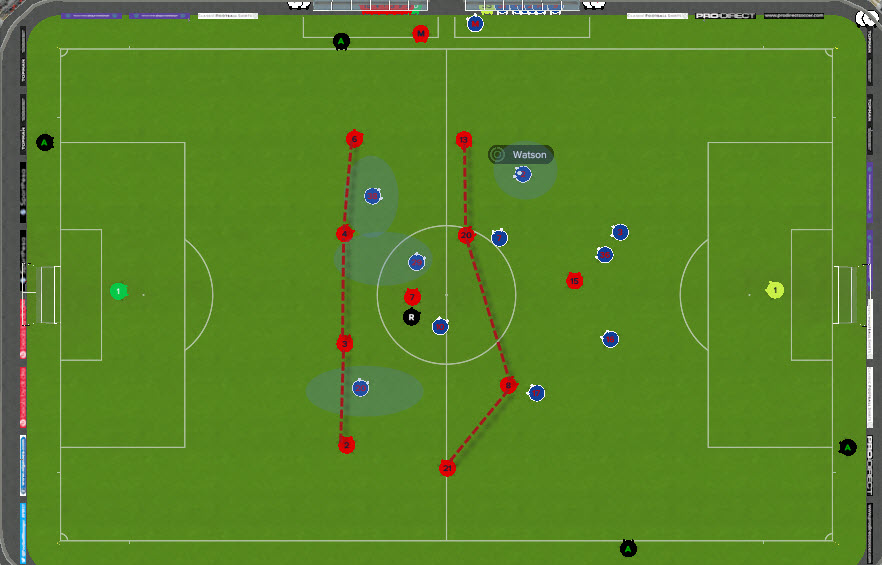 The system used by PSG in the early stages of the match was designed to keep the game tight and prevent Reading from finding space in the final third.

Unfortunately for the French side their zonal marking system played almost entirely in to the hands of Reading as the English side dominated the central areas of the field.

In this example we see Watson on the right of the field for Reading in possession of the ball. It is indicative of the narrow shape favoured by the English side that Watson and Fogden are narrow in the attacking phase as opposed to moving wide to exploit space.

Thiago Maia at the base of the PSG midfield has immediately been isolated and overloaded by the Reading midfield with two players moving in to the central advanced zone. Also note the positioning of the two strikers for Reading who have drifted in to space between the central defender and the fullbacks in a move that essentially stretches the connections in the PSG back four and creates space centrally.

Reading combine through the centre to score first

The first goal of the match for Reading was indicative of what we would see for the entire 90 minutes as the English side combined beautifully through the centre of the pitch to score. 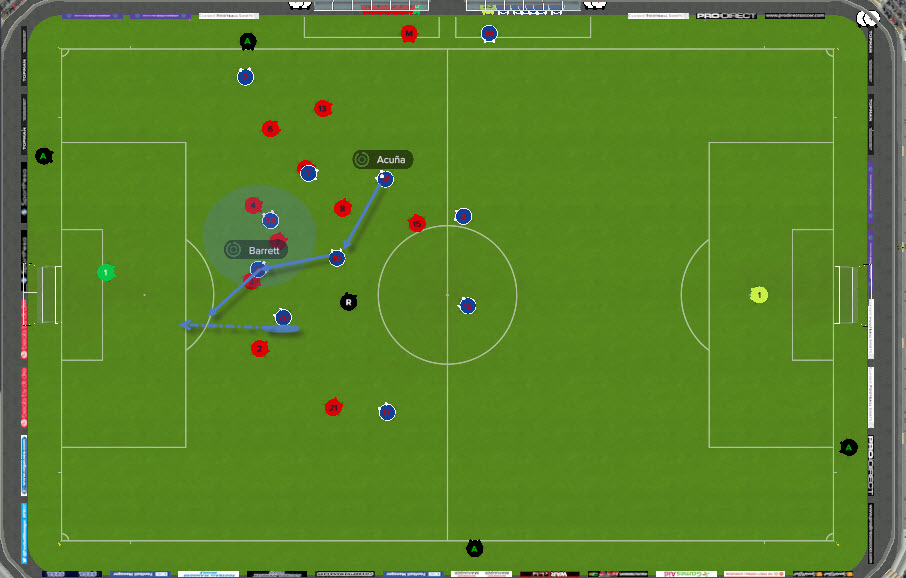 This example again highlights the interplay around the attacking players for Reading in the centre of the field that PSG struggled to cope with.

The key is in the highlighted area just outside the penalty area where we see Liam Kelly and Josh Barrett pinning three defensive players for PSG, one of whom is the defensive midfielder Thiago Maia.

As the ball is played forward by Acuna he finds a teammate in acres of space in the centre of the field. The ball is then cycled in to the central area where Barrett takes possession before turning and playing the ball in behind the defensive line for Danny Loader to run in and finish.

The positioning of Kelly and Barrett occupies the two central defenders and Maia and Loader is allowed to drift back in to the gap between the fullback and the central defenders. When the pass is played in to the area there was no doubt that Loader would finish.

In an attempt to get back in to the game in the second half of the match we saw PSG sacrifice a midfield player for an extra striker which just played even more in to the hands of the English side as they were allowed to completely dominate the central areas. 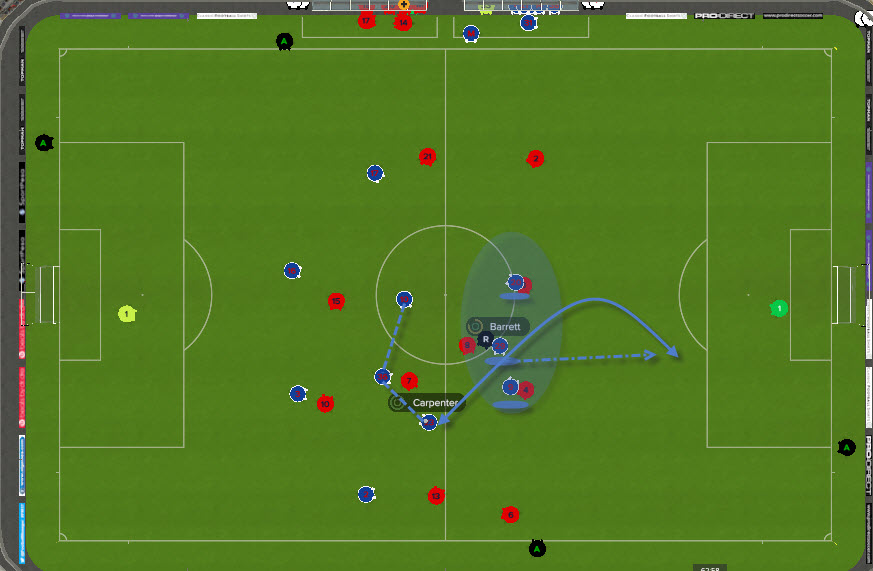 Here you can see the disjointed shape that PSG shifted in to in order to chase the game. With two attackers the spaces that they left in the midfield were huge allowing Reading to access the final third centrally with ease.

On this occasion as the ball reached Carpenter on the right of the central midfield we saw three Reading attackers narrow in the final third.

Josh Barrett had moved goalside of Thiago Maia as the Brazilian lost focus and Carpenter was able to lift the ball in to the gap between the defensive line and goalkeeper for Barrett to move on to before rounding the goalkeeper and scoring. 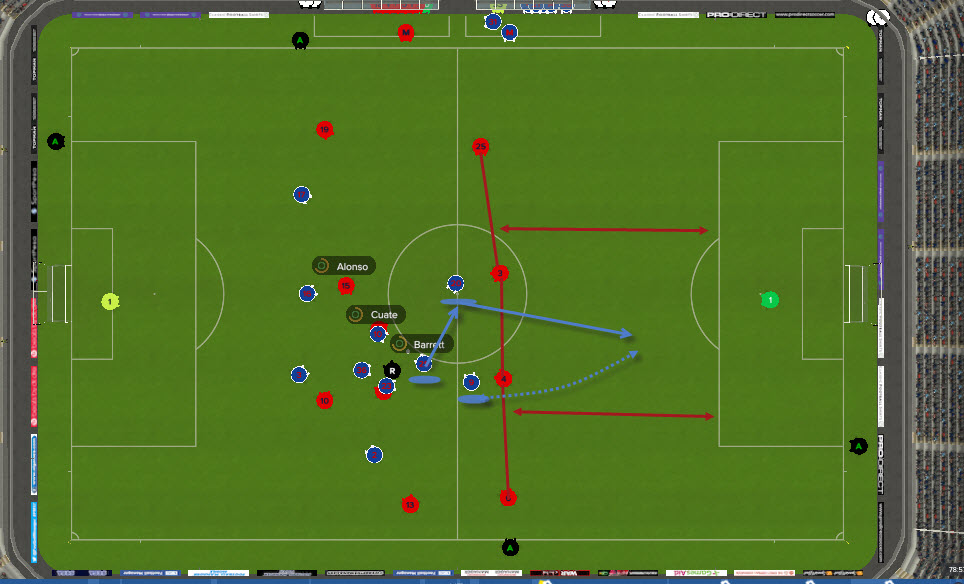 The French side showed no hint of learning their lesson in this match. Again in this example we clearly see that PSG have pushed up and committed players in to the final third of the pitch in order to chase the game.

Once again the keys to the attacking movement are Barrett, Loader and Kelly. As the ball comes to Josh Barrett in the first instance the combination play is quick and direct with the first pass finding Danny Loader and the striker immediately splitting the defensive line with a through ball behind the defence.

Liam Kelly is then able to run on to the ball before finishing the chance easily.

In truth from the early stages of this match the result was never in doubt. Indeed the score in the end of the match of 6-1 does not even flatter Reading who showed the ability to play to their strengths throughout the match.

PSG tried to play reactively in order to negate the strengths of Reading but in the end they simply capitulated and allowed the English side free reign in the centre of the pitch. 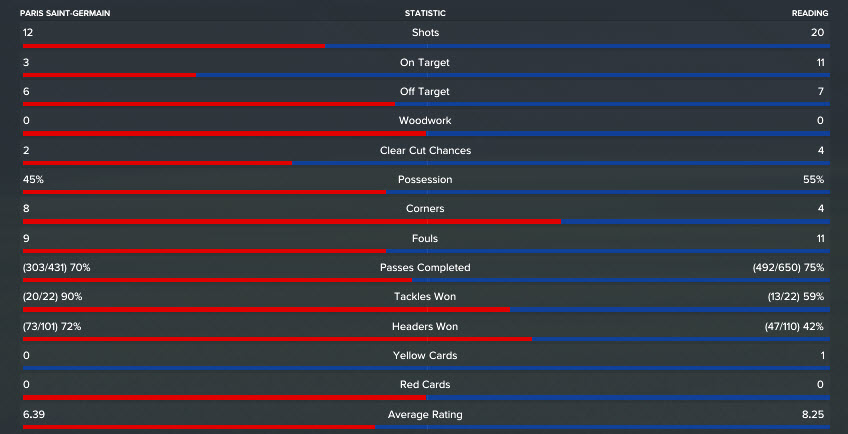 In the end Reading only enjoyed 55% of possession over the 90 minutes but they showed themselves to be ruthless in possession with the creation and the finishing of chances.

On the strength of this performance there are not many who would bet against Reading retaining the trophy again next year round.