Home Football Manager 17 How to Build a Perfect Squad

When embarking on your journey to Football Manager glory, it is fundamental to your success that you get everything right. Critical to this is establishing a coherent, organised, and achievable plan that can guide your every move. The core of such a plan is squad management. This post will detail what a squad should look like; covering areas such as squad size, age and career paths.

Well, the obvious answer here is 25. Over the course of a standard 40-50 game season, this may be realistic, but longer or more congested seasons (Brazil, for example) will need greater squad depth.

For now, let’s assume we are managing an English team. Some managers are keen proponents of a lean squad. Guardiola is such an example with his squads tending to be particularly versatile. Other managers, like Benitez, have a history of building large squads. He had at one stage 62 players [1] on the books but, some of those players were loaned out.

Both are higher than the 25 I proposed. With the 25 I am only talking about first team professional players and excluding Reserve/Youth players. Two players per position plus three versatile players capable of covering many positions. The rest of the team is then made up of Reserve/Youth players who are not yet good enough for a starting position but are capable backups.

The key here though is ability, not age. Too many clubs have deadwood in the side. While I am saying all players should be good enough to start, I am not saying they all need to be of equal ability. This would imply equal wages which become a waste if a player may only be making 5-10 appearances per season.

It is worth considering a rotation policy as well. I prefer to rotate as little as possible but do so based on fitness. I use as little players as I can get away with. When injuries happen I promote a player up the scale. My backup player becomes my starter and a youth player becomes my backup. When my original starter returns, I will usually reintegrate him back to the starting line up. He would then be a backup to build match fitness with substitute appearances until he’s able to be my starter again.

I have these policies in place so that when a crisis happens, your squad depth is of a good quality to minimise the impact of the loss. An example crisis would be your star midfielder getting injured.

Injuries are unavoidable hence why versatile players are so important. James Milner plays in a variety of positions for Liverpool and whilst he is not a star player, he is of high enough quality to cover where needed. For example, I like my wingers to be able to play central attacking midfield. I prefer my defensive midfielders to be able to drop to centre back or move into the centre of midfield. My full-backs should always be adept as wing backs and vice versa.

Here is why I said a squad size of 25. Having players who are versatile means you might have two or three backups per position. With a squad size of 22, it is possible but it’s harder to rotate enough because of fixture congestion. Due to the rarity of good versatile players, having a bigger squad gives you this chance.

A bigger squad size has some worthwhile benefits; injury issues are not as significant and you will have options if a player’s form drops. The higher wage budget per player is a benefit that means I prefer a lean squad.

Of course, 25 so happens to be the limit for a Premier League squad – convenient! This doesn’t mean you can’t have more players at the club. Having a 22-year-old who isn’t benefiting you but the club is paying £10,000 on their wages isn’t worth it. When a player is young (U20, for example) it is acceptable, they are developing, but it is less acceptable as they get older.

A question I always ask myself: is this player too old? Should I only be buying players aged under 24, under 27, under 30? Well, that all depends on what type of squad you are trying to build. I have rules for buying players and so should you. My number one rule though is if it is a good deal – take it. Never say no to a good deal. The player might be 32 but if they’ll make an impact on the pitch, sell a few shirts or make a good tutor they might be worth it.

This provides a “perfect” balance of players. A younger squad may be your preference or it may not.

If you happen to manage a ‘selling club’ then you’ll want to shift those figures higher to the left (younger). If your club is hitting form and you do not want to sell your favourite players, then your ages will shift to the right (older).

But situations at clubs can change. You need to be flexible with how you structure your squad. You will want to stick with your original idea if that happens to be youth development. This doesn’t mean the average age of your squad cannot increase or decrease. Be flexible, a club legend may want to stick around or the perfect tutor might become available.

The idea behind this is that you need consistency, or stability, within the club. A defined career pathway for young players to follow is necessary to keep your club steady and progressing. The biggest crime in football isn’t stagnation, it is in regression.

So how do you build a career path? It is a personal thing how you document and implement it. I like strict career paths to follow with few players being the exception to the rule. I have for the purposes of this guide tried to document the career path I am using during my Norwich save. It is still a work-in-progress though, as all good plans are. The return of the flowchart: 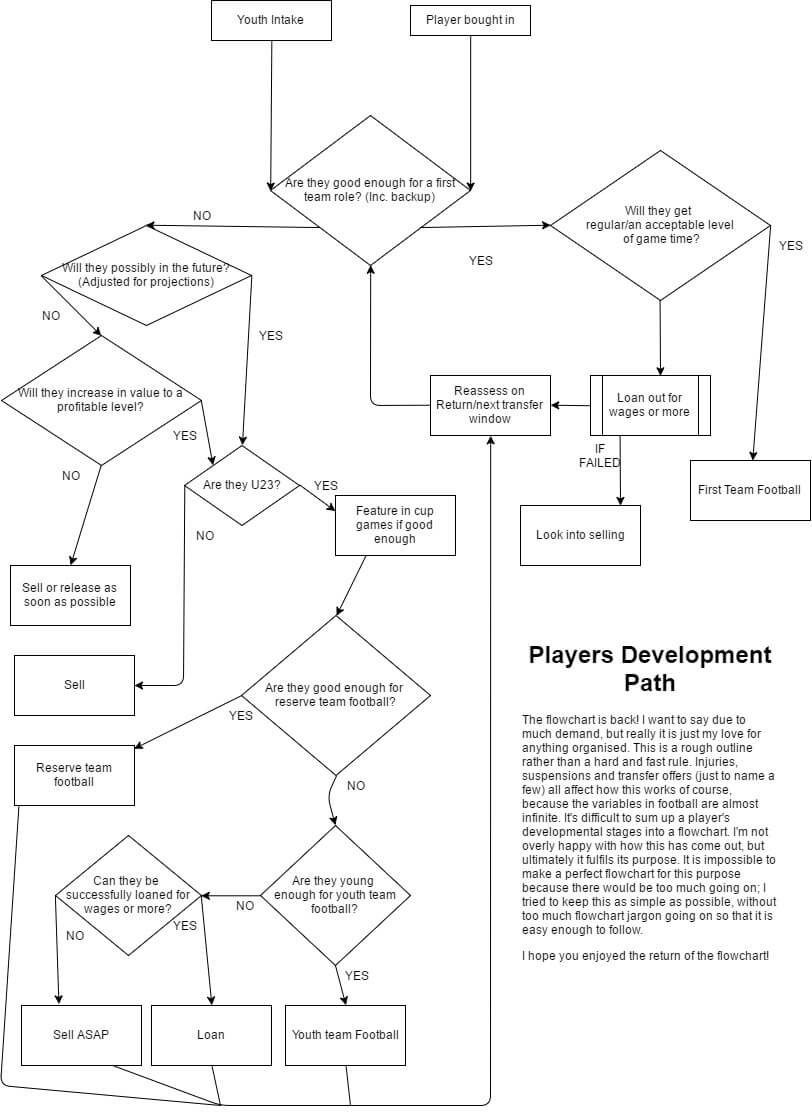 Oh, it feels good! Sorry, back to the post. What I would recommend is to consider what you value in your player’s’ development. You may place more emphasis on loaning players than I am. I prefer to have them at the club, but that is due to my greed and love of youth trophies. One of my goals for this save is to challenge for first team and youth team trophies, though we are some way off both.

Small sections of this guide may seem harsh but it’s all a part of trying to create a true conveyor belt of talent. It is important to avoid deadwood in the squad. Players who are too old to develop further are being overpaid for their impact. Missing out on useful players because of this harsh method may be worth it. In the long run it will increase the development chances of other players. On a secondary level, it will save us money on wages and increase player sales vs. released.

The process will be ‘complete’ when the system flows. If I can replace a veteran, with a 28-30-year-old, a 28-30-year-old with a 24-27-year-old and so on. It will mean being reactive, proactive and retrospective if I am to survive the volatile transfer market. I, and you will make mistakes which will need fixing but as long as they get fixed you’ll be A-OK!

Thank you to @ZeGermanFM and my girlfriend for editing this article. Between them, they decimated so much of it I’m not sure I should put my own name to it. If you want more from me though follow me on twitter @OffThePitchFM and click on my name at the bottom of this post for my other Tempo posts.