After following up last season’s fantastic exploits with an incredible first half of the season, what did the rest of the campaign have in store for our Celtic heroes? Let’s find out…

We pick up where we left off, with the January 2019 transfer window about to open. It was an underwhelming month for the fans, with nobody joining the club and, for the first time since I took charge, no Bosman signings announced for the summer. There was a simple reason for this: None of the available players would have added anything to the current squad. Instead, we spend January trying to make money by sending out players on loan. Ryan Christie, Daniel Church, Simon Scully and James Henry went out on loan for the rest of the season, bringing in a total of £58.5k per month for the club, as well as reducing the wage bill significantly.

While it was hardly the most inspiring of transfer windows, the club tried to capture the fans’ imagination in the league. A 2-2 draw at home to Inverness wasn’t the best start to the new year, but 2-0 and 4-0 victories away to Hibernian and at home to Kilmarnock, respectively, renewed optimism as we headed into the Scottish Cup 4th round against St. Johnstone. Mass changes to the line-up backfired, as Celtic lost 3-1 and were bundled out of the competition they had won the previous season.

We followed that up with a disappointing 2-2 draw at Hamilton to end a less-than-impressive January. We remained top of the league, but we would need to improve over the rest of the season if we wanted to win the league.

A 2-0 win at home to Rangers was a timely confidence-booster, which was a catalyst to three more wins at Hearts (3-1), at home to Aberdeen (2-0) and away to Dundee (2-1), before Champions League football returned to Parkhead as we hosted Real Madrid in the 1st Knockout Stage of the tournament.

Real Madrid showed their class to put themselves ahead after the first leg. A late goal from Leigh Griffiths gave us hope heading into the 2nd leg, but Ronaldo’s early brace was no more than Madrid deserved. They were easily the better side, but nevertheless, Griffiths’ goal kept the unlikely dream alive.

Returning to domestic football, a 3-0 win against 2nd placed Partick Thistle put an end to any thoughts of anybody catching us in the league, and a 2-0 win against Motherwell gave the fans renewed optimism that we could pull off the upset in Madrid.

We never looked like getting anything out of the game, and in truth a 2-0 defeat was as good a result as we could have hoped for. From the first whistle until the last, we were completely outplayed. With 1 shot and only 39% possession, we were outclassed by a far superior side.

There is no shame in losing to Real Madrid, however, so we were not too disheartened. A 1-0 win against St. Johnstone avenged the Scottish Cup defeat and put us just one win away from the league title, so when Hibs came to Celtic Park, the fans were in great form. A goal from Leigh Griffiths in he 81st minute had the fans jumping for joy, but a late equaliser from Jack Paterson dampened the celebrations – we would have to wait a little longer to confirm our status as Kings of Scottish football once again.

A week later, in the 33rd game of the season, we visited Inverness with just one thing on our minds – win the title. An early goal from Leigh Griffiths sent us on our way, and when Dan Gosling made it 2-0 midway through the first half, there would be no denying us. That’s how the game remained, and Celtic were Champions of Scotland for the third time in my three seasons in charge.

51,199 fans packed into Celtic Park for our next game – against Inverness once again. They wanted to watch their heroes lift the trophy, but before that, our Bhoys had a show to put on for them! Scott Sinclair got the party started with a goal on 15 minutes, and doubled his tally 15 minutes later. Leigh Griffiths – keen not to let his team-mate overshadow him – then took over. A goal just before the break made it 3-0, before the Scottish international scored another 3 in the second half to cap off a sublime display and lead Celtic to a 6-0 win, before lifting the title in front of the cheering fans!

After that, however, the players seemed to dip. A 3-0 defeat at Aberdeen was followed by a narrow 2-1 win against Hearts. A 1-1 draw at Rangers and 4-2 defeat at Partick Thistle ensured we ended the season somewhat disappointed.

Despite the disappointing performances in the final few games of the season, the fans still had plenty to celebrate – including the end of season awards.

After I had picked up both Manager of the Season awards, the Celtic fans had their say on the players that stood out for the season: 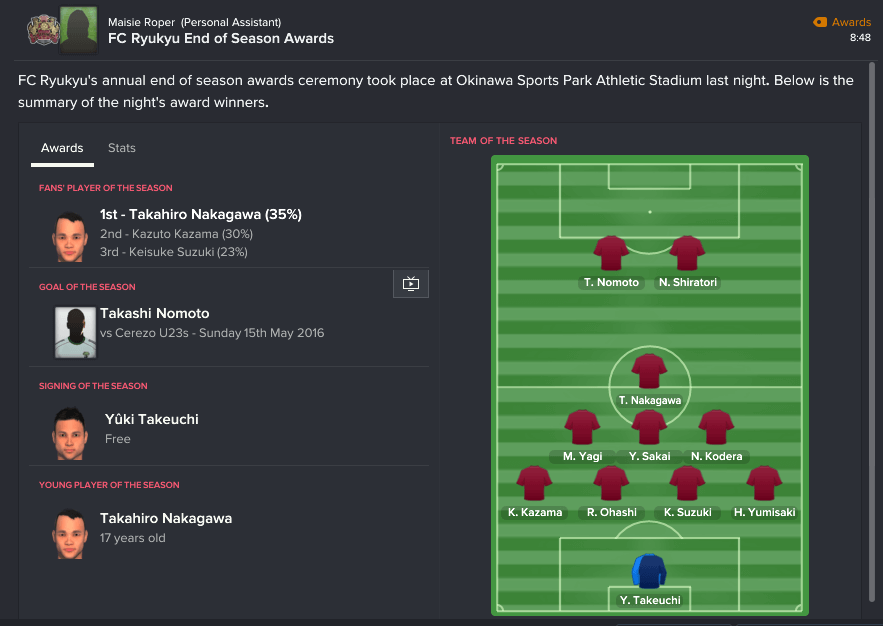 The team of the season was never in question – it was the Starting XI for most of the games throughout the campaign. What did come as a surprise was the Fans’ Player of the Season. Charlie Taylor won the award after an impressive campaign that included 1 goal and 15 assists, but Leigh Griffiths would have felt rightly aggrieved to miss out. 45 goals in 48 appearances apparently wasn’t enough to earn him the fans’ praise – although he did win the award for Goal of the Season.

Griffiths was the only choice for the prestigious (and completely fictional) Manager’s Player of the Season award, however; there was no competition this year. Baily Cargill – the winner of the award for the first two seasons of my reign – had another great season, but nobody came close to the phenomenon up front. 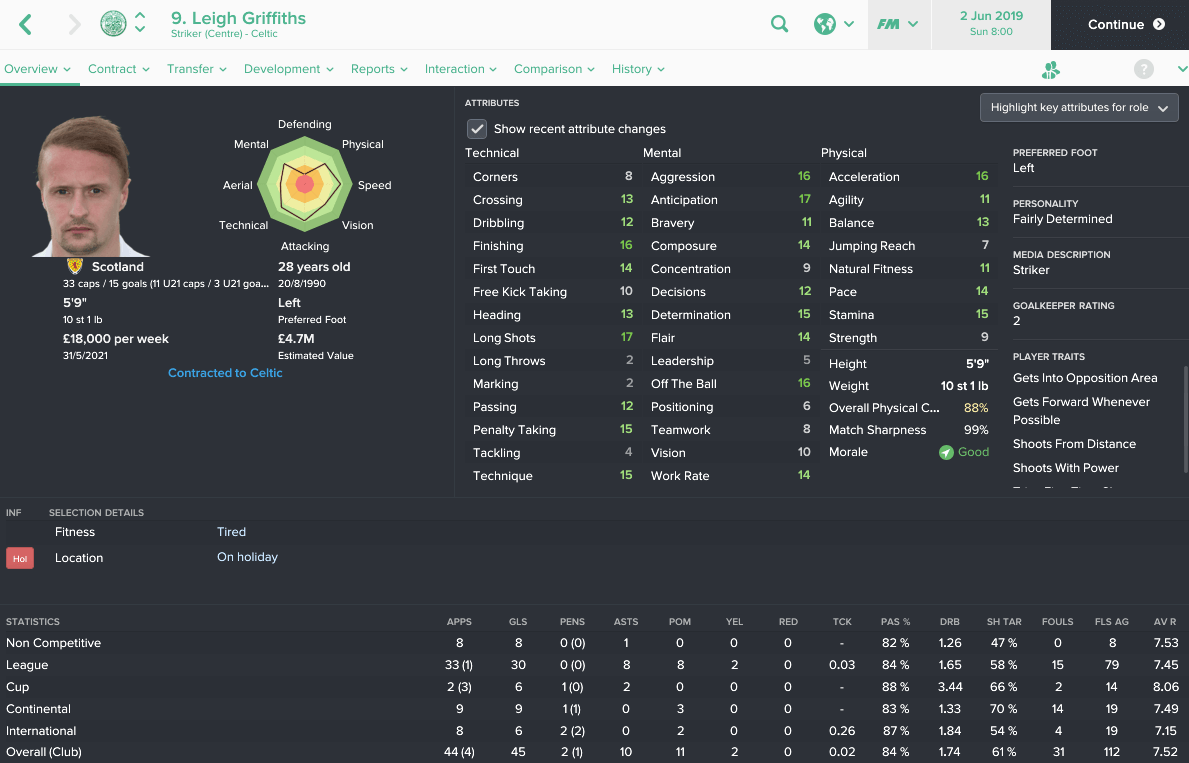 Not everything was rosy at Celtic, however, and after three seasons at the club, it was time for me to say goodbye. Winning the Europa League in just my second season in charge, after clearing out all foreigners from the squad, had completed the challenge of conquering Europe with an all-British squad – at least, as far as was possible.

I maintain that winning the Champions League with an all-British team is possible. I just don’t think it’s possible with Celtic. Despite winning the Europa League and progressing in the Champions League, the only elite players with any interest of joining the club are Jesse Lingard and Jack Wilshere – however, the lack of funds (I have a £1.5m transfer budget) means they are well out of reach.

The best player within budget appears to be Che Adams from Birmingham (no, I’ve never heard of him either), so unless we were to sell Leigh Griffiths to generate funds, we are unlikely to ever get close to signing the type of player that will elevate us to the next level. Even then, it would only be one great player amongst a squad of good and slightly-above-average players.

What we achieved in our second season was a miracle, and in truth, I should have stopped there. The third season was a disappointment, despite winning the League and League Cup. Throughout the season, I had been tempted by offers from Valencia, AS Monaco, Liverpool and Everton and it became clear that it was time to leave. Truthfully, the restriction of only buying British has grown tiresome, but I don’t want to break that rule while I’m at Celtic.

So after 3 Scottish Premiership titles, 3 Scottish League Cups, 1 Scottish Cup and a historic Europa League trophy, it was time to leave Parkhead. I don’t know where I’m going next, or what I want to achieve elsewhere, but it’s time to continue this story elsewhere.

So, until next time… 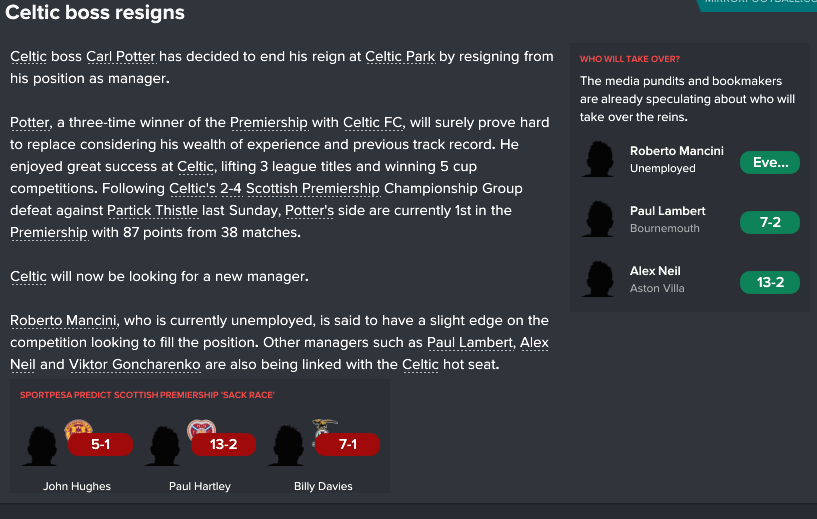